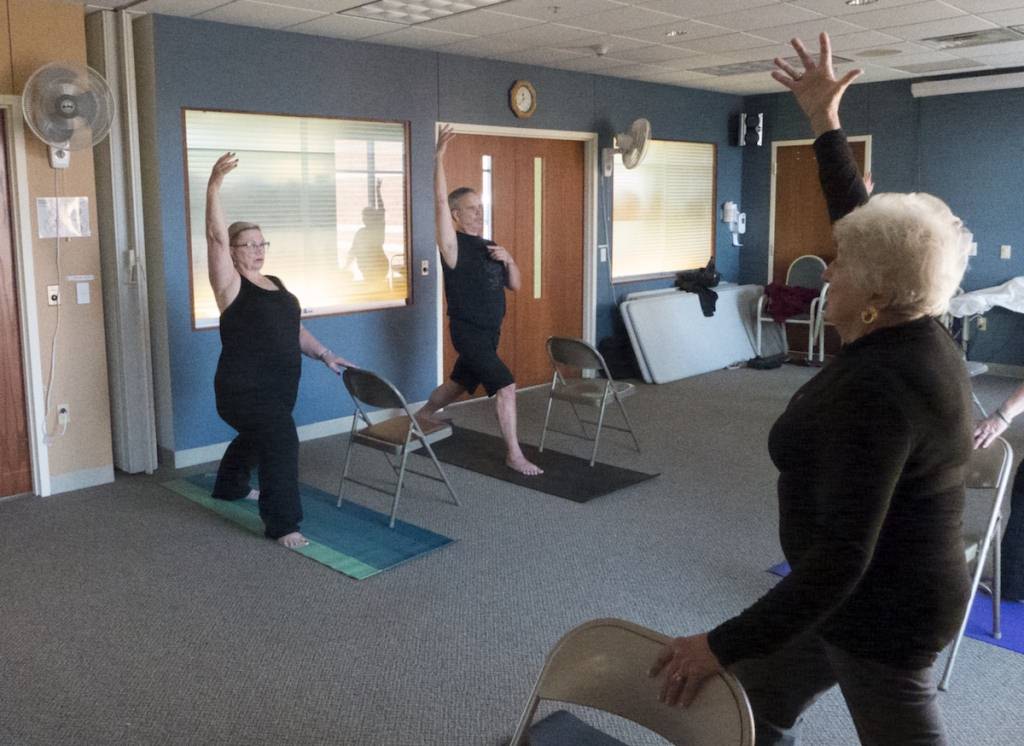 Yoga instructor Paul Mross, who taught yoga for the new study, leads a different class in Dodgeville. “When it comes to fall prevention, we want to help you stand strong, but it’s not just standing,” he says. “We move in our life, we are reaching, doing whatever it is we need to function, and yoga helps us remain stable then, too.” David Tenenbaum, University Communications

People who do hatha yoga report improved balance, but only now has yoga’s impact on falls received rigorous study.

Now, University of Wisconsin–Madison professor of family medicine Irene Hamrick reports that the number of falls in older adults dropped 48 percent in the six months after yoga classes began, compared to the six months previous.

Hatha yoga is a series of poses that can be performed on the floor or standing. They are intended to improve flexibility, mood and presence of mind. The practice originated in India and usually includes a period of meditation.

The 38 study participants attended biweekly classes for eight weeks in Dodgeville, Platteville and Monroe. The study was supported by the Community Academic Aging Research Network, or CAARN, and it was funded by the Wisconsin Partnership Program at the UW School of Medicine and Public Health.

Among people aged 65 and up, falls are the leading cause of injury death, and the most common cause of nonfatal injuries and hospital trauma admissions. Thirty percent of this age group has a fall each year; the rate rises to 50 percent by age 80. 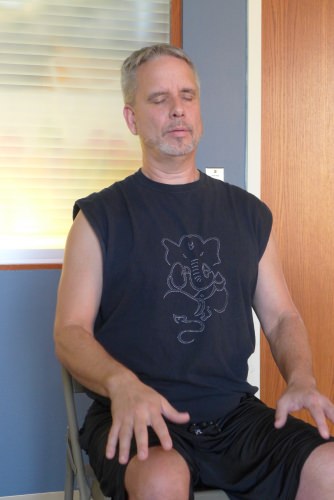 Mross leads meditation at the close of the class at Upland Hills Health in Dodgeville, Wisconsin. David Tenenbaum, University Communications

All participants took twice-weekly yoga classes for 8 weeks, and were assigned to do five minutes of meditation at home; half were also randomly assigned to add in 10 minutes of yoga to the meditation. Curiously, the expected improvement in falls from this “homework” did not happen, Hamrick says: Both groups had an equal and significant reduction in falls.

That surprising result may show that the in-class practice alone was enough to reinforcing the critical connection between nerves and muscles, says Hamrick. “It might be that this does not take that much practice; once you learn it, it’s yours to keep.”

“Yoga makes you have a strong core,” says Anne Bachner, a member of the study’s community advisory board, “so when moving around in your daily life, you are not just flapping around. You are stable, in control.”

Adds Bachner, a retired teacher in Dodgeville who has been taking yoga for a decade, “Yoga enriches my life in all different ways; it’s become part of my life, and it’s good with all this stress.”

The study design did not make it easy to isolate yoga poses from meditation. Hamrick says the effect of meditation alone on reducing falls has apparently not been studied. “It could be worth looking into, comparing meditation alone to yoga or balance exercises, but it’s hard to know what would be the practical impact. Meditation is an integral part of yoga.”

In Hamrick’s study, all participants saw significant improvements on two measures of walking gait, and on balance. However, only the yoga-at-home group expressed improved confidence in their balance.

Participants did mention giving more thought to a principle of the class – the need to pay attention “to the four corners of your foot.”

“People come here to learn something, and then they take it out into the world, and walking is a great example,” says Mross, who taught yoga at one of the three locations. “People say, I have walked my whole life, and I take a yoga class, and I start putting the practice of yoga into my walking, and it’s transformed.”

Participants did say that eight weeks was not enough. A larger study now under consideration will likely last 12 or 16 weeks.

Although the present study was small, finding a reduction in falls was encouraging, Hamrick says, and it may mean that homework is not as vital as assumed. “We have always harped on practice, along the lines of what we suggest for building muscles. But maybe the brain-nerve-muscle connection that is built in classes just needs to be stimulated periodically, and the classes are enough to do that.”