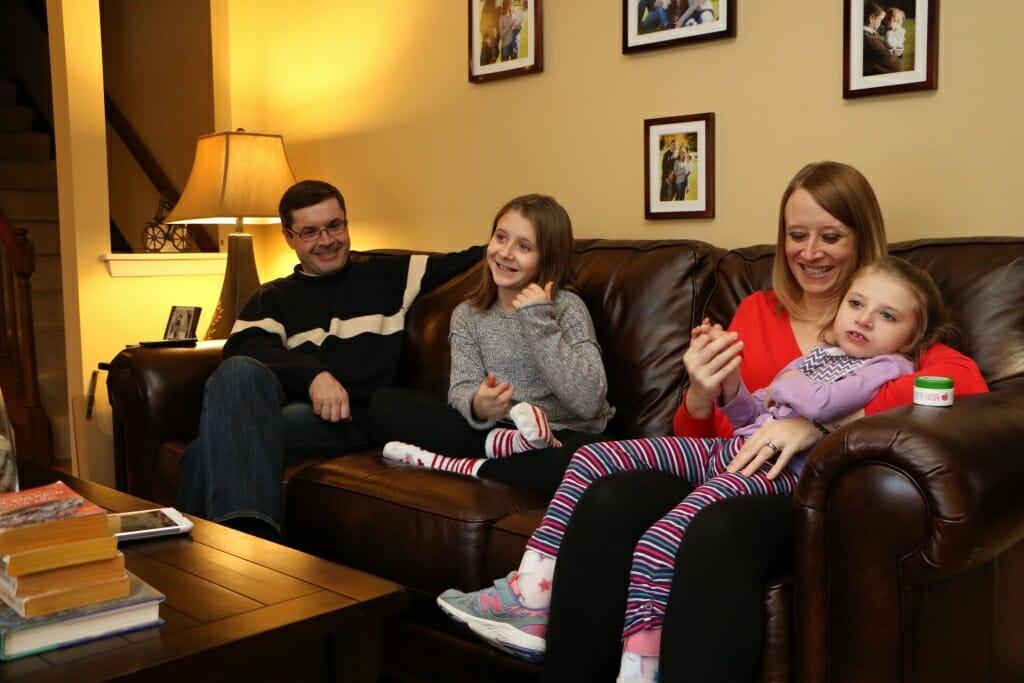 Laurel Cooper is 8 years old and full of sass and spunk. She finds it hilarious when her older sister, Annalise, gets into trouble. She loves music, and being in the thick of things.

Cooper also has Rett syndrome, a rare, non-inherited neurological disorder that mostly affects girls and causes severe deterioration in their ability to speak, eat, move and even breathe easily. Rett syndrome has no cure.

Because of her disease, Cooper needs to use a feeding tube, and isn’t always able to get enough nutrients. Despite being 3 feet, 7 inches tall, she weighs just 35 pounds. She cannot speak and has extreme difficulty communicating, though she typically manages by using her eyes and with the help of an assistive device. 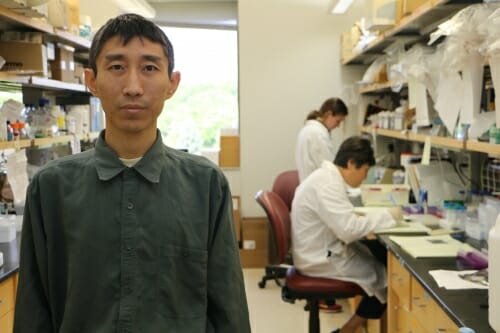 Relatively few scientists study the rare disease, which is not well understood. But Waisman Center investigator Qiang Chang, associate professor of medical genetics and neurology, is trying to unravel the molecular mysteries of Rett syndrome. He hopes to develop effective therapies and treatments for Cooper and other patients like her.

One gene, many troubles

When people ask 11-year-old Annalise why her sister doesn’t walk or speak, she has an answer ready: “I tell them that there’s just one teeny problem in her little body that’s keeping her from doing all those things,” she says. 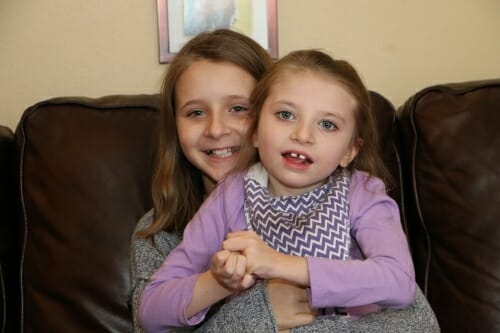 For the vast majority of individuals with Rett syndrome that “teeny problem” is that a gene called MECP2 (pronounced mek-pea-too) is altered or mutated.

But how these changes in MECP2 lead to the physiological changes and impairments seen in Rett syndrome patients is not well understood because it presumably plays a variety of roles.

“The MECP2 gene is active in almost all the various types of cells in the body,” says Chang, “and the protein made from the MECP2 gene can influence many seemingly unrelated aspects of human growth and physiology.”

Depending on the specific genetic change and its effects, symptoms of Rett syndrome can vary significantly between patients, and may include disrupted sleep, scoliosis (atypical curvature of the spine), and behavioral and anxiety issues. Some patients, like Cooper, may also face other challenges, including gastrointestinal problems.

The biology underlying these different symptoms is complex. In fact, “there are so many things at the molecular and cellular levels that are different in Rett syndrome patients that it can be difficult to know where to even begin,” says Chang.

How does a change in a single gene lead to so many different physiological and behavioral symptoms? Researchers like Chang are beginning to uncover clues.

Recently, Chang’s lab found a new connection between MECP2 and nerve cells in a mouse model of the disease. He and his colleagues found that the abnormal MECP2 protein in those mice could no longer interact with several proteins involved in a process called RNA-splicing.

“Mutations in the MECP2 gene changed how nerve cells in the mouse brain responded to stimuli and communicated with each other,” says Chang.

Cells use RNA as templates to make proteins. Much like how different parts of a movie need to be edited and put together to make a coherent story, most of the RNA in our cells need to be cut and joined together, or spliced, before they can be used to make working proteins.

If RNA splicing is altered, it can lead to the production of proteins that don’t function properly and this can disrupt many different processes in our bodies.

In the mice lacking normally-functioning MECP2, Chang’s group found that the RNA-splicing machinery was affected and several proteins were altered, including a key component of a structure that allows nerve cells to communicate with each other.

Because of her disease, it can be hard for Laurel to tell her parents when something is awry.

“Some mornings she will wake up happy, but other mornings her breathing will be all over the place, she might be grinding her teeth. We call these Rett mornings,” says Laurel’s father, Jason Cooper. “She will try very hard to communicate, but it’s difficult to know exactly what’s wrong.”

Rett mornings can be frustrating, Jason says, especially when patience is wearing thin, but the family relies on one another to get through the challenging times. Annalise often offers valuable perspective about her sister’s disability, Jason adds.

Despite her difficulties communicating, Rett syndrome hasn’t stopped Laurel from making friends at school. And she has many, her family says. She is fully included in school activities and exercises. 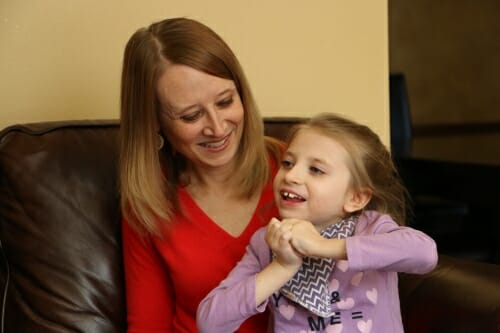 “It’s great to watch the other kids with Laurel,” says Heather Cooper, Laurel’s mother. “They read to her, they push her wheelchair, they include her in their play, all without being prompted. I think they know that if she could be up talking and running with them – and getting into trouble – she would.”

Researchers have made significant progress since the discovery that linked MECP2 to Rett syndrome. Chang’s lab recently developed a stem-cell-based model that can be used to better understand the underlying mechanisms behind the disease and screen new drugs as potential therapeutics.

“These stem cells were created using skin cells donated by individuals with Rett syndrome, and without these cells we would not have learned a lot of the things we know today,” says Chang.

A recent study from his lab that used these stem cells provided the first evidence that a protein called CREB is involved in Rett syndrome biology and could prove to be a therapeutic target to treat the disease.

For Chang, laboratory research on Rett syndrome is inextricably tied to the search for a cure. “Without basic research, we won’t know which genes to target for therapies,” he says. “Then, if we can demonstrate that the therapies work in cell-based and animal-based assays, we can look to develop them further for Rett syndrome patients.”

Looking to the future

The Coopers focus on taking things one day at a time. “For us, it’s making sure that Laurel has a good quality of life” says Jason.

On warm Madison weekends, the entire Cooper family tends to head downtown in search of fun. “We start off with the farmers market, have lunch, walk down to the (Memorial) Union and next thing you know, it’s 4 p.m., so you might as well get a brat and a pitcher and then it’s time to go home!” says Jason.

They also host friends and relatives often, to play games or just hang out with Laurel and Annalise. “When we are at home and Laurel hits a rough patch, one of us can go upstairs, stay with her, put her headphones on or put her in her rocking chair to calm her down,” says Heather.

Chang has met with Laurel and her family several times, and these meetings fuel his commitment to researching Rett syndrome.

“I think, as human beings, we have a natural tendency to want to help people, and when you actually interact with people in need, it reminds you that what you are doing in the lab is not just to satisfy intellectual curiosity, it’s not only the pursuit of knowledge, it’s also trying to help people as much as you can.”