Nadia Drake, a veteran freelance science journalist and a contributing writer for National Geographic, will be the fall 2016 UW–Madison Science Writer in Residence. 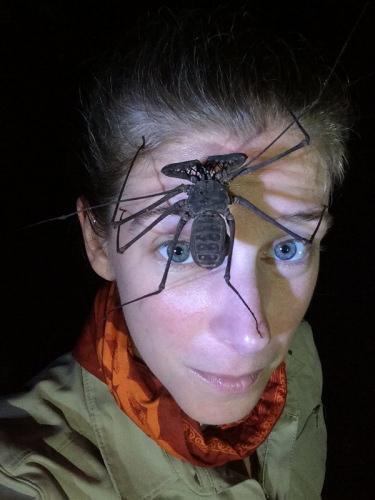 Nadia Drake will speak on “Spiders, Jaguars, Gold and the Uncontacted” as part of her Science Writer in Residence visit to campus. Photo: Nadia Drake

Drake holds a doctorate in genetics from Cornell and is a graduate of the University of California, Santa Cruz’s science writing program. She has contributed to numerous publications and venues, including Nature, Wired Science and Science News. She is a contributing writer for “No Place Like Home,” a blog with National Geographic’s Phenomena science salon. Drake is also a former professional ballerina.

Drake’s work spans the sciences. She has written about subjects as diverse as giant spiders and human ancestry, although much of her work focuses on astronomy and space science. She writes frequently about such things as exoplanets and their moons, the search for extraterrestrial life, and human space exploration.

Drake will begin her week on the UW–Madison campus Oct. 3. She will spend most of her time in the classroom working with students, faculty and staff interested in science writing and science journalism. She will deliver a free public lecture, “Spiders, Jaguars, Gold and the Uncontacted: Tales from Reporting in the Peruvian Amazon,” on Tuesday, Oct. 4, at 4 p.m. in the Red Gym, 716 Langdon St. (Check Today in the Union for room number.)

Drake’s work spans the sciences. She has written about subjects as diverse as giant spiders and human ancestry, although much of her work focuses on astronomy and space science.

The Science Writer in Residence Program, now in its 30th year, was established with the support of the Brittingham Trust. It continues with support from the University of Wisconsin Foundation and has brought to campus many of the nation’s leading science writers, including three whose work subsequently earned them the Pulitzer Prize, journalism’s most coveted award.

The program is sponsored by the School of Journalism and Mass Communication and the office of University Communications.