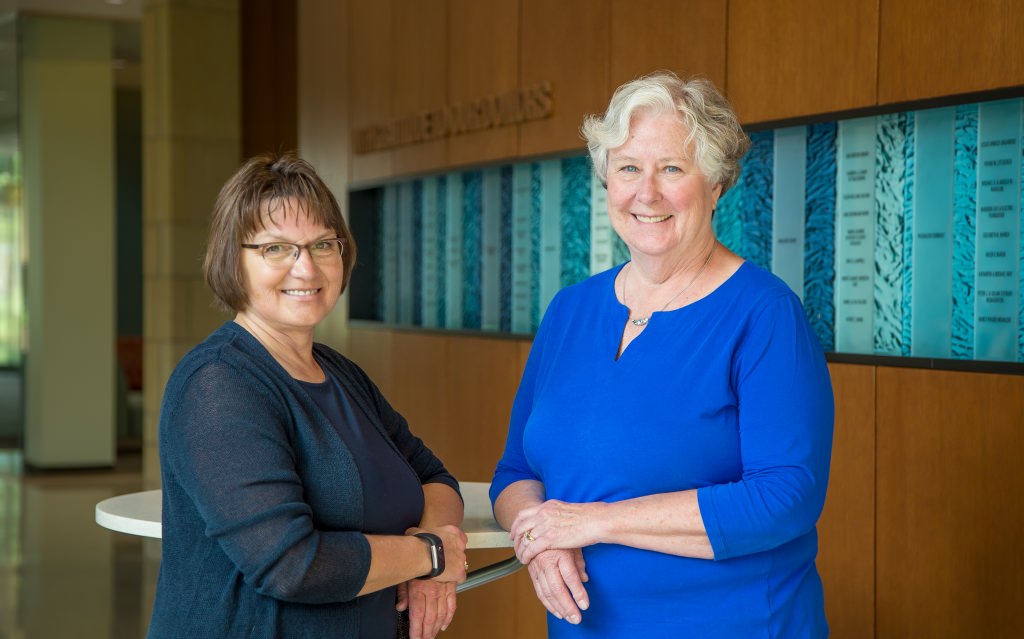 Nursing professor Barbara King and senior scientist Polly Ryan have been named as fellows of the American Academy of Nursing. Alexander Andre

A member of the University of Wisconsin–Madison School of Nursing faculty, a senior scientist, a member of the school’s Board of Visitors, and an esteemed graduate have been named as fellows of the American Academy of Nursing.

They will be honored at a ceremony during the Academy’s annual policy conference, Transforming Health, Driving Policy, October 5–7, 2017, in Washington, D.C.

UW-Madison nursing professor Barbara J. King, senior scientist Polly Ryan, Chair of the School of Nursing Board of Visitors Nancy Kaufman and alumna MarySue Heilemann are among this year’s 173 highly distinguished nurse leaders to earn one of the profession’s highest honors.

For King, selection as a fellow validates her focus on changing nursing practice as a way to improve outcomes for older adult patients and decrease healthcare utilization costs. Her research shows that while nurses recognize how established systems and practices inhibit optimal results for patients, they often face systematic and personal barriers that prevent them from implementing change to improve outcomes.

Given that there are no standardized evidence-based practice guidelines, hospital administrators and nurses tend to limit falls by preventing ambulation. While this practice does reduce falls during hospital stays, it leads to unintended consequences that are ultimately even more problematic for patients when they go home.

King says these negative outcomes are largely preventable with modifications to nurses’ workflow in hospital settings. She has developed and is piloting a system that enables nurses to walk patients safely, even when they are labeled as a “fall risk.”

Early data suggests the intervention is both effective and sustainable. “Walking patients has always been within the scope of nursing practice,” she says. “We know it is good for patients, and, it turns out, walking patients is also good for nurses who feel more satisfaction and less frustration when they can do more of what they know their patients need.”

Ryan’s research might help women delay or avoid some of the fragility that can accompany age. She studies women in the windows just before and after menopause, striving to instill health behaviors that are known to preserve bone mass and safeguard against osteoporosis and the physical vulnerability that accompanies it.

Yet health behavior change, particularly without symptoms or obvious limitation, is notoriously challenging. Just ask anyone who struggles to make it to the gym, to avoid the doughnuts on the counter at the office, or who stays up late watching television despite feeling exhausted all day.

“I naively used to refer to health behavior change as a process, or a single step or decision,” Ryan says. “In fact, there are multiple patterns and processes involved in change, and there are informational, behavioral and social aspects to it.”

Ryan developed a theoretical framework that helps explain and support health behavior change both in women during middle age and across other populations. The theory addresses context, process and outcomes, and Ryan says the process piece is what makes her framework stand out. “We have learned that health behavior change involves goal setting and re-setting, monitoring, engagement, evaluation, and adjustment,” she says. “It is an iterative process.”

Other members of the 2017 fellow class with UW–Madison ties include Kaufman, who is both an alumna and current chair of the School of Nursing Board of Visitors, and Heilemann, a Badger Nurse alumna who recently served as a visiting scholar at the school and is a member of the UCLA School of Nursing faculty.

“It is a privilege to welcome these four outstanding nurses into the Academy fellowship,” says Dean Linda D. Scott. “Each is doing critical work to advance nursing practice in an effort to improve health for individuals, families, communities and populations. This honor reflects their dedication and contributions to the profession.”

Upon the induction of the new class, the Academy will include more than 2,500 nurse leaders in education, management, practice, policy, and research. Academy fellows include hospital and government administrators, college deans, and renowned scientific researchers. It is regarded as one of the highest honors in the nursing profession.

Fellow selection criteria include evidence of significant contributions to nursing and health care and sponsorship by two current Academy fellows. Applicants are reviewed by a panel comprised of elected and appointed fellows, and selection is based, in part, on the extent the nominee’s nursing career has influenced health policies and the health and well-being of all.