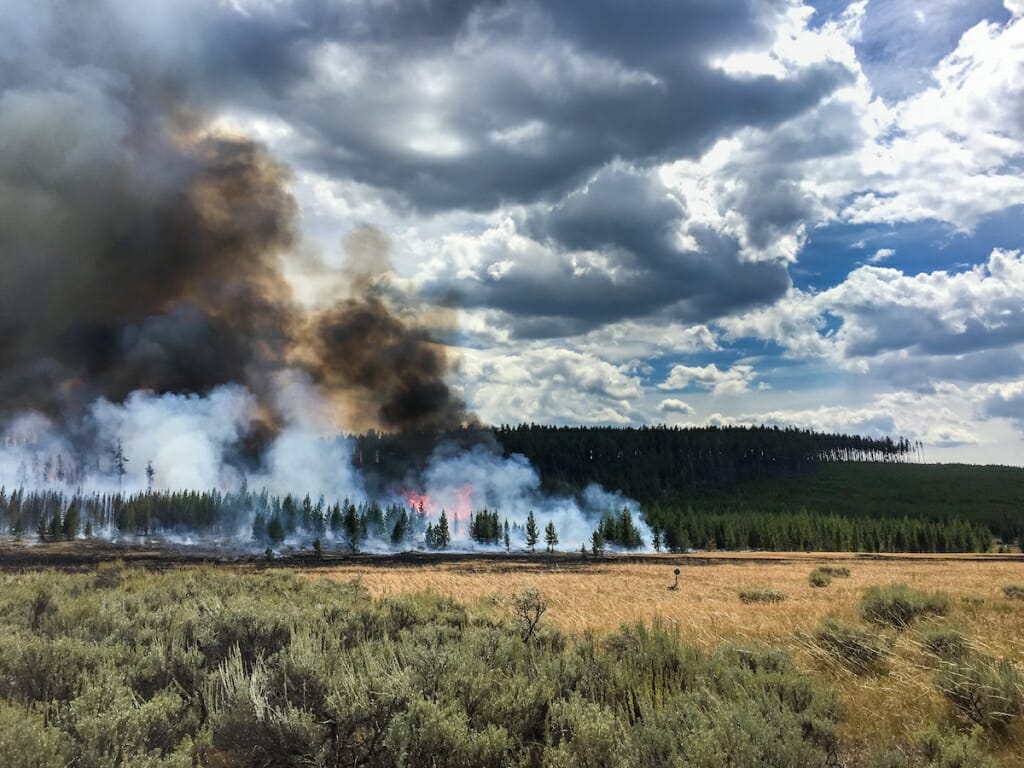 In August 2016, areas of Yellowstone National Park that burned in 1988 burned again. Shortly after, in October 2016, ecologist Monica Turner and her team of graduate students visited the park to begin to assess the landscape.

“We saw these areas where everything was combusted and we hadn’t seen that previously,” says Turner, a professor of integrative biology at the University of Wisconsin–Madison who has closely studied Yellowstone’s response to fire since 1988. “That was surprising.”

In a study published this week [May 20, 2019] in the Proceedings of the National Academy of Sciences, Turner and her team describe what happens when Yellowstone —  adapted to recurring fires every 100 to 300 years — instead burns twice in fewer than 30 years. Yellowstone as we know it faces an uncertain future, the researchers say, and one of the big questions they hope to answer is whether the forests can recover. 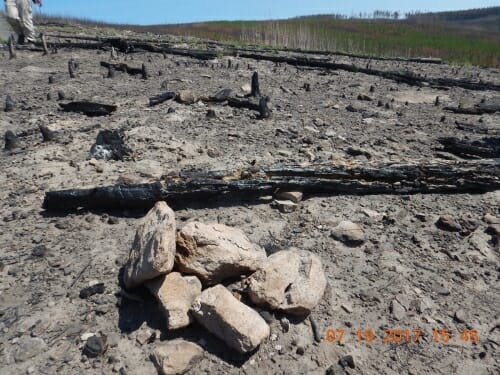 The pile of rocks with the nail in the middle signifies a long-term study plot Monica Turner and her research group established at Yellowstone National Park in 1990 following the park’s historic 1988 fires. This same plot burned again in 2016. Historically, fires burn in Yellowstone only every 100 to 300 years. Photo by: Monica Turner

With Rapid Response Research funding from the National Science Foundation, Turner and her team returned to Yellowstone in the summer of 2017 to study the areas that re-burned. These include the Maple Fire, which burned 28-year-old lodgepole pines that regenerated following the 1988 North Fork Fire, and the Berry Fire, which contained 28-year-old lodgepole pines that had regenerated after the 1988 Huck Fire and 16-year-old trees that regenerated following the 2000 Glade Fire.

In some areas, fire burned so severely that nothing but the stumps of young trees remained. Logs that had once been scattered on the forest floor combusted, leaving negatives of their former selves — ghost shadows — where they’d fallen.

“Everything was gone,” Turner says. “That was astonishing.”

Typically, most trees killed by fire remain standing for years. Surface fires leave dead needles on trees. Crown fires burn needles off but leave standing trunks. However, four of the 18 re-burned plots Turner’s team sampled saw fire so severe they had to come up with a new name to describe them: crown fire plus. In these, 99 percent of the stems of previous trees combusted. 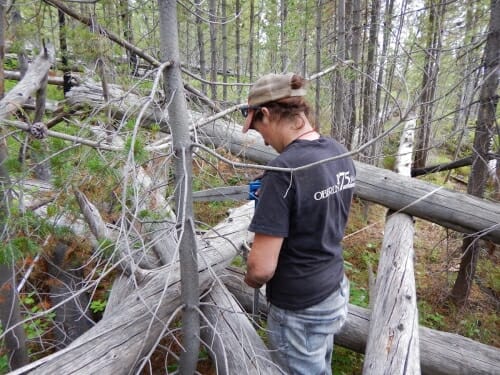 Graduate student and study co-author Kristin Braziunas samples dead wood in an area that burned in Yellowstone’s historic 1988 fires but did not re-burn in 2016. Photo by: Monica Turner

In 2011, modeling work by Turner’s group challenged pre-existing notions that young forests lack enough fuel in the form of trees and downed logs to sustain severe fire. The 2016 fires confirmed their predictions.

“The idea was that if fires are recurring more frequently, we will we see some self-limitation, young forests will not be able to re-burn,” says study co-author, graduate student Kristin Braziunas. “We definitively saw this was not the case — even at just 16 years old, there was sufficient fuel for these forests to burn at the highest possible level of severity.”

The team also found a six-fold decline in the number of lodgepole pine tree seedlings that re-established in the first year following the 2016 fires. In some patches of re-burned forest, regeneration rates were significantly lower. Dense, young forests were converted into much sparser ones.

Lodgepole pine trees are known for their serotinous cones, which are adapted to open in fire and release their seeds, replenishing the forest with a thick blanket of new trees once the blaze has fizzled. Historically, the 100-to-300-year fire intervals gave trees the chance to mature and build up their seed banks. 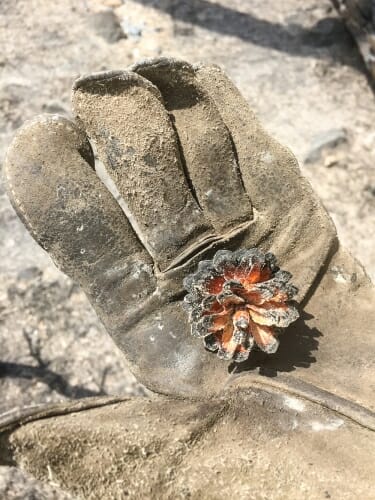 The serotinous cone of a lodgepole pine, opened by the flames of the Maple Fire. Photo: NPS / Jennifer Jerrett

But younger trees have not yet built up their savings, so a quick re-burn is like dipping into a bank account before the funds have been replenished.

The researchers also found that the re-burned forests lost significant carbon storage capacity. Nearly two out of three logs on the forest floor were consumed in the 2016 fires. These pieces of dead wood were carbon sinks, storing carbon that the tree took up while alive. When burned, they release carbon into the atmosphere.

Turner explains that once an old forest burns, it takes about 90 years for the forest to recover its lost carbon.

“We care about carbon storage and recovery because forests play a very important role in the global carbon cycle,” says Braziunas, who before joining Turner’s research group spent more than seven years working as a municipal firefighter in Oberlin, Ohio.

Braziunas adapted a model previously created by Turner’s collaborator, Rupert Seidl, to estimate how long it would take for the forest to recover the carbon it had lost to the atmosphere in the 2016 fires, between tree loss, downed wood consumption, and reduced tree regeneration density. She found it would take more than 150 years, assuming the forests do not burn again in that time. 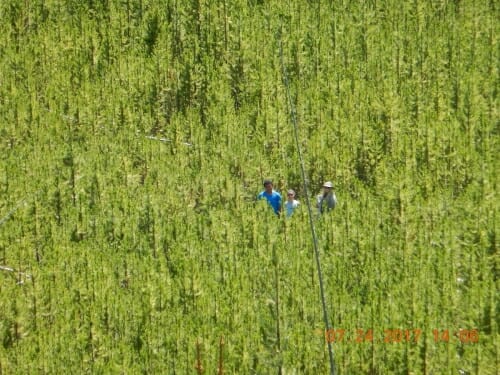 Researchers and field assistants stand in the middle of a very dense stand of lodgepole pines that regenerated following Yellowstone’s historic fires of 1988. In 2016, patches of forest like this burned so severely that only stumps remained, earning a new name for the type of fire: “crown fire plus.” Photo by: Monica Turner

“We were essentially able to reconstruct what the forest looked like before the fire happened, how many trees there were and how big they would have been,” Braziunas says. “Because we also measured nearby stands (of trees) that didn’t burn, we could compare what happens after the reburns and game out the scenarios in the model.”

The estimate, she and Turner say, represents a best-case, conservative scenario. With a warming climate and increased frequency of drought, the forests are likely to burn again in short intervals.

However, the forest has long shown itself to be resilient.

“The landscapes are going to look different than they have in the past,” says Turner, “but that doesn’t mean they won’t be beautiful. There will be species that benefit and species that see their ranges contract.”

The fires that ravaged Yellowstone National Park in 1988 were large and severe, but they were still within the normal limits of fire patterns in the West. Following those fires 30 years ago, University of Wisconsin–Madison Professor of Integrative Biology, Monica Turner, immediately got to work studying the recovery of the forests and she has continued to do so in the decades since. UW–Madison video

IMAGES AND VIDEO LINK AT https://uwmadison.box.com/v/yellowstone-reburn