For something so small, neurons can be quite complex — not only because there are billions of them in a brain, but because their function can be influenced by many factors, like their shape and genetic makeup.

A research team led by Daifeng Wang, a Waisman Center professor of biostatistics and medical informatics and computer sciences at the University of Wisconsin–Madison, is adapting machine learning and artificial intelligence techniques to better understand how a variety of traits together affect the way neurons work and behave. 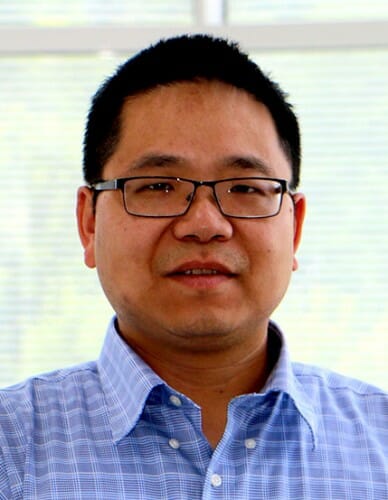 In the first study, reported in November 2021 in the journal Communications Biology, the researchers showed they could apply manifold learning to predict the features of neurons. Applying existing machine learning techniques, which use computer algorithms to analyze large amounts of data and automatically make predictions, they found they could classify cells based on their genes and their electrophysiological behavior. This behavior encompasses the electrical activity of neurons, which is crucial for communication between neurons and, ultimately, the brain’s function.

Using information from roughly 3,000 neurons in the mouse brain, the scientists applied manifold learning to align gene expression and electrophysiological data. Their goal was to establish whether there was a measurable relationship between the two.

They found that both of these neuronal cell features show similar patterns — high values in the same group of cells, but low values in the rest of the cells — and were aligned in “multi-dimensional space,” or demonstrated a relationship to one another. This defines their so-called manifold shape, a complex mathematical description of the neurons’ properties.

“Based on this manifold shape, we found that cells can be clustered together into different groups,” says Wang, also a professor of biostatistics and medical informatics at the UW School of Medicine and Public Health.

Clustering cells using only one feature, either gene expression alone or electrophysiology alone, did not result in clusters that were as clearly separated as when both features were used in tandem.

The scientists then asked how genes might work together to influence cellular electrophysiology. Using cell clusters, they found links between electrophysiological features and specific genes that control the expression of other genes. Some of these genes are also involved in controlling the immune system, suggesting an interaction between neuronal communication and inflammation.

With this data, Wang and his students then explored whether they could make predictions about a neuron’s electrophysiological features based on gene expression. Wang compared this to trying to predict the relationship between traffic patterns in a particular part of a city and the number of take-out orders from area restaurants at any given time of day.

“If you compare the traffic with the number of take-out orders from the restaurants in a particular area, they are two different things, but I believe that they share some similar patterns — like they may both have the same peak hours,” he says. “Here, we would use the manifold alignment to align the patterns between traffic (electrophysiology) and take-out order amount (gene expression) and then find the shared pattern between the two.”

With the concept worked out, Wang’s team then used the data they gathered to inform their second study, published in January in Nature Computational Science. It describes a new and improved type of manifold learning that addresses the limitations of earlier models and could help researchers better understand neuron function in the context of health and disease.

Called deepManReg, the new model improves the prediction of neuronal characteristics based on gene expression and electrophysiology. It is also more generalizable to other types of cell data, can integrate more than two types of neuronal features, and can reveal how multiple features connect or influence each other.

Using machine learning for these applications could help reduce the time and money required to study certain features of the brain. Though the researchers’ most recent studies were based on healthy cells, Wang intends to use the techniques to learn more about brain disorders and diseases.

“Basically, (we can study) how those genes are regulated to affect the electrophysiology or behaviors in diseased cells,” Wang says.