Wisconsin Sea Grant-funded research is revealing a more detailed picture of the range of viral hemorrhagic septicemia virus in Wisconsin waters. Since the early 2000s, the invasive pathogen has caused deaths in more than 30 fish species in the Great Lakes region.

The researchers’ findings have been published in the Journal of Aquatic Animal Health, a publication of the American Fisheries Society. The findings show that the virus in Wisconsin can be found further inland and in more bodies of water than previously known.

The key to discovering this new information was testing fish for the presence of antibodies to the VHS virus through a process known as enzyme-linked immunosorbent assay, or ELISA. While the general method not new, this particular process is, and it was developed with Sea Grant support. “It’s a valuable tool in fish health testing,” says Tony Goldberg, an epidemiology professor at the University of Wisconsin–Madison School of Veterinary Medicine and one of the research paper’s authors. 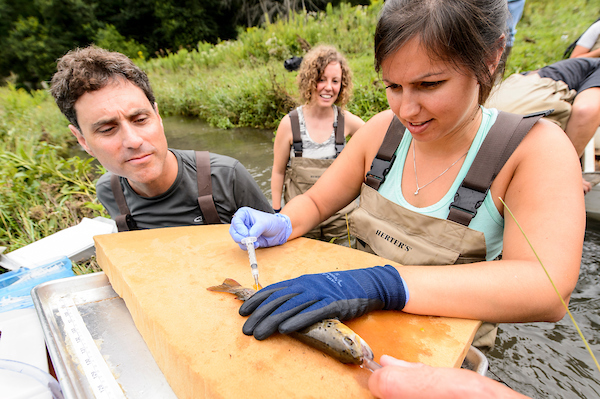 While other, more common testing methods look for presence of the live virus, the new method detects past exposure, which is “really useful for screening populations and looking back in time,” Goldberg says. Blood samples are collected from fish in a non-lethal way.

The research team focused on four sport fish that are economically important in Wisconsin: bluegill, brown trout, northern pike and walleye. Fish with VHS virus antibodies were found in 37 of 46 inland water bodies tested, including water bodies far from known outbreak events. Sampling occurred in 2016 and 2017.

Researchers found the results surprising. “I suspected we’d see it spread out in some of the inland water bodies connected to the Winnebago watershed or the Green Bay area — where we already knew VHS was — but I didn’t expect we would see it so far inland,” says Whitney Thiel, first author of the journal article. Thiel completed a master’s degree in freshwater and marine sciences at UW–Madison in 2019 and is now a research scientist at the University of Idaho.

Since the early 2000s, viral hemorrhagic septicemia has caused deaths in more than 30 fish species in the Great Lakes region.

Another intriguing finding was what members of the team characterized as “hot spots” and “not spots,” which were often close together. Prior to the research, they expected that any additional instances of the virus would be near bodies of water known to have problems. However, in a number of cases, a body of water with no evidence of VHS virus could be found neighboring one with evidence of it.

David Giehtbrock, fish culture section chief at the Wisconsin Department of Natural Resources and another of the paper’s authors, says this new information was all the more reason for those using Wisconsin’s waters — like recreational boaters and anglers — to keep taking preventative steps against the spread of aquatic invasive species in general.

“We need to continue all those practices that have been in place for a long time, to mitigate any transfer of VHSV between bodies of water, which is what we were already asking people to do everywhere. From invasives like Eurasian watermilfoil to carp to VHSV, we’re already asking people to clean their boats, drain their live wells and not transfer water between bodies of water,” says Giehtbrock.

“What people should take away from this is, we want to keep it out of where it’s not,” says Goldberg. 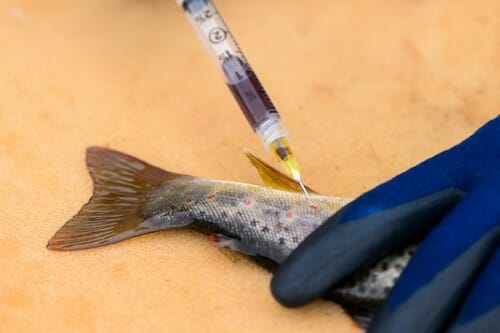 Blood samples were drawn from fish in a non-lethal way. In this 2016 photo, a sample is taken from a brown trout. Photo: Bryce Richter

Giehtbrock, who supervises DNR fish hatcheries around the state, does not foresee a change in fish stocking practices at this point. Citing both Department of Agriculture regulations and the DNR’s own policies, he says managing the health of fish for stocking is already strictly controlled.

“VHSV is one big component of that,” Giehtbrock explains. “We do virus testing on all of the stocks prior to their departure from the hatchery for stocking. So in terms of actual stocking practice, I don’t see a change because we’re already doing all the testing and monitoring that is feasible to make sure that everything we put out there is healthy and not spreading disease.”

Where Giehtbrock does see a possible change, however, is on the demand side, if more fish are needed to maintain or supplement fisheries being affected by fish kills from the pathogen. However, such a situation has not occurred yet.

This new information paints a more accurate and complex picture of viral hemorrhagic septicemia virus in Wisconsin than previously understood. The research team recommends vigilance against potentially spreading the virus or other invasives. The best offense is a good defense, such as adhering to current advice promoted by the “Clean Boats, Clean Waters” campaign and similar initiatives.

Other authors of the research paper (“Widespread Seropositivity to Viral Hemmorhagic Septicemia Virus in Four Species of Inland Sport Fishes in Wisconsin“), in addition to Goldberg, Thiel and Giehtbrock, are Kathy L. Toohey-Kurth, Bridget B. Baker and Megan Finley.