UW-Madison driving Wisconsin’s economy, now and into the future

Powered by a top-ranked research program, the University of Wisconsin–Madison, its affiliate organizations and the startup companies coming out of the university have a total $30.8 billion annual statewide economic impact, equivalent to nearly 9% of Wisconsin’s $345 billion economy, according to a new report.

Conducted by NorthStar Analytics, LLC, the study finds that UW–Madison is one of Wisconsin’s major job creators, responsible for 232,057 public and private sector jobs—more than 7% of the 3 million jobs in Wisconsin, or 1 out of every 13 jobs in the state—and $1 billion in state and local taxes, putting it on par with major Wisconsin industries like dairy, food processing and tourism.

According to the report, taxpayer support in UW–Madison delivers a huge return on investment. For every $1 taxpayers invest in the university, more than $26 is put back into the state’s economy. 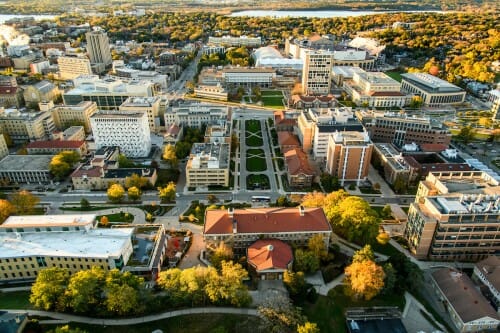 The University of Wisconsin–Madison has a total $30.8 billion annual statewide economic impact, according to a new study. Photo: Bryce Richter

In addition to a billion-dollar research engine, UW–Madison continues to produce ideas and inventions that solve some of the biggest challenges at home and across the globe. The university and UW–Madison affiliates like the Wisconsin Alumni Research Foundation (WARF) are home to a leading patent system, a deep pool of scientific talent, powerful computing infrastructure, and curriculum that supports the development of entrepreneurs. Together, these elements make up a partnership that empowers innovators to directly address problems facing major industries in Wisconsin and beyond.

“The research and innovation fostered at UW–Madison have brought the world’s leading tech companies to the state and launched hundreds of startups,” says UW–Madison Chancellor Rebecca Blank. “The university continues to attract and nurture talent whose research and discoveries have tackled everything from shifts in Wisconsin’s agriculture to public health emergencies like the global COVID-19 pandemic.”

Substantial growth has come from the creation of new companies based on research at UW–Madison, commonly referred to as startups. Since 1990, the university has helped create more than 400 startups that generate an annual economic impact of $10 billion, 42,855 jobs and $320,224,874 in state and local tax revenue. UW–Madison’s track record of technology spinoffs includes Wisconsin companies such as the radiotherapy treatment TomoTherapy and SHINE Medical Technologies, a leading producer of medical isotopes used for diagnosing cancer, heart disease and other conditions. 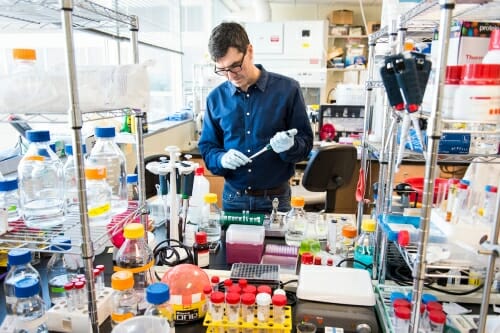 Roland Green, president of Invenra and a UW–Madison graduate, works in the company’s research lab at the University Research Park in 2015. Since 1990, UW–Madison has helped create more than 400 startups that generate an annual economic impact of $10 billion, a new study says. Photo: Jeff Miller

“This study confirms that investments in UW–Madison get translated into research breakthroughs that become startup companies that create jobs, hire university graduates, and buy goods and services from across Wisconsin,” says Aaron Olver, managing director of UW–Madison’s University Research Park.

“It’s a virtuous circle that helps spread prosperity across Wisconsin while tackling critical problems like disease and climate change.”

Andrew Richards, Director of UW–Madison’s Discovery to Product (D2P) agrees. “Innovation is key to a thriving economy, whether it is improving the competitiveness of mature industries or creating whole new business opportunities.”

The report further demonstrates how UW–Madison positively impacts Wisconsin businesses, with over 90% of the university’s economic impact benefiting the private sector. Private sector industries profiting from the university’s presence include real estate, software development and advanced manufacturing. This activity also generates significant tax revenue – more than $648 million – that contributes to the overall quality of life for Wisconsinites statewide. 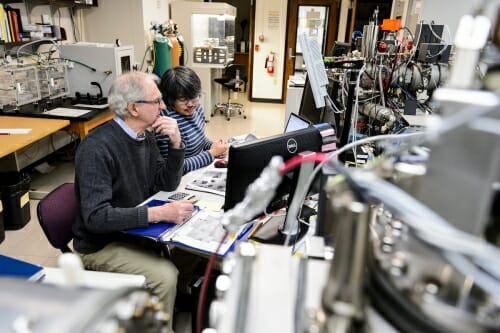 Geoscience Professor John Valley, right, and research scientist Kouki Kitajima collaborate in the Wisconsin Secondary Ion Mass Spectrometer Lab in Weeks Hall in 2017. In 2019, UW–Madison reported nearly $1.3 billion in annual expenditures for research across all fields, about half of which comes from federal awards. Photo: Jeff Miller

“The numbers in our report show the large impact that comes from UW–Madison and its benefit to the entire state,” says David J. Ward, chief executive officer of NorthStar Analytics, LLC. “As we move further into the information economy, the university is clearly a driver of innovation for a broad range of Wisconsin industries from manufacturing to health care, building an important foundation for future growth in the state.”

More than 169,700 UW–Madison alumni contribute to the economy by living, working and spending in the State of Wisconsin. Of the Wisconsin residents who graduate from UW–Madison, 80% continue to live in the state five years after receiving their degree. Graduates from the university report median earnings of nearly $76,000 in the same five-year timeframe.

View the entire report and an executive summary.