While observing heavy use of selfie apps such as Snapchat, graduate student Amy Niu found herself wondering about the effects that virtual makeovers have on college-age females.

Apps such as Snapchat and others offer users photographic filters that change their look. In China, where Niu is originally from, apps similar to this are used even more heavily than they are in the United States.

Popular apps among Chinese college-age females apply the filter as soon as the user opens the app while popular American apps require the user to select a filter before it is applied. Additionally, many Chinese students have phones that apply the filter directly through the phone’s camera so they are seeing their enhanced self every time they take a selfie. In other words, they are seeing themselves with the filter more often than their unedited face. 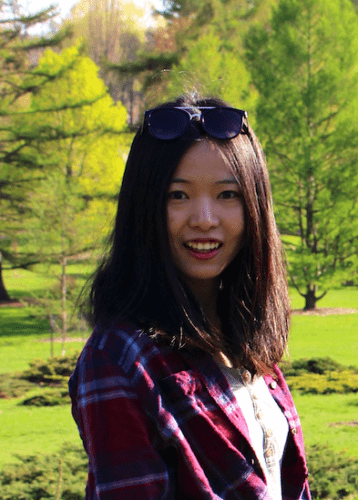 “I started to wonder how looking at a different self will change how people will view themselves,” said Niu, who is in the Department of Educational Psychology.

From this wondering, her research was born. Niu set out to conduct a study to find out if selfie-editing filters negatively or positively impact one’s evaluation of self, focusing primarily on Chinese college-age females.

As a graduate student in the human development area of her department, Niu is also working on her dissertation that focuses on college student’s social-emotional adjustment and their use of technology and social media. Because of this, Niu is no stranger to research involving the effects that social media apps have on college students.

Winning the UW Global Health Institute’s 2019 Graduate Student Research Award allowed Niu to begin her study. In order to collect her data, she experimented by asking one group of students to look at themselves with a filter applied and another group to look at themselves through a regular camera without a filter.

“I will then be asking each group questions about their self-evaluation and comparing the results to see whether the self-evaluations for these two groups of students are different,” Niu said.

An important part of the study is how it relates to social comparison theory. This theory says that when comparing yourself to others, people are more likely to compare themselves to someone who is better looking and this will negatively impact our self-evaluation. When comparing yourself to a better-looking self, the effects may be very different.

“When comparing to a better-looking self, you may think ‘that’s a potential me.’ By this kind of comparison, you may see the potential of being prettier or you may assimilate that image to your self-image. That assimilation may cause you to think ‘I look pretty good’ or ‘I may look as good as this if I make a little bit of effort on myself,’” Niu said.

Niu believes that this different kind of comparison, which is the kind at play with selfie apps, may elicit a different response and cause students to lose perspective on how they actually look. This illusion of one’s self-image, she suggests, may cause people to temporarily feel better about themselves but later, when they are exposed to their actual look, their self-image may experience greater disturbance than traditional appearance comparisons.

Though the grant Niu received will only be applied to the data collection in China, she conducted a primary experiment on American students in collaboration with Felix Zhan, a consumer science graduate student, as well. At this time, Niu has not completed the study but she has seen some interesting differences between the results from the two country’s samples.

“In the American sample, it seems that their self-evaluation is not really influenced by this exposure to a better-looking self, even though the exposure will slightly increase their willingness to conduct cosmetic surgery. For the Chinese students, those who look at the enhanced images do feel better about themselves than those who look at their actual selves,” Niu said.

The results for the Chinese sample were in line with her initial hypothesis.

When she has completed the study in October, she is interested in finding what reasons for the difference in the results between the two samples may be. One of these reasons, she hypothesizes, may be the education in China about self-image. She hopes that the report she will generate will provide insights on how to promote healthy body image among Chinese young women.

“College females need to know that physical appearance is not everything. It is risky to base one’s self-evaluation on appearance. Though one may think a filtered selfie makes her closer to the societal standard of beauty, the fact is that standard is always hard to meet in reality. The algorithm of the beauty filters will only further reinforce the standard in your mind. When you look at your bare face, you fall short. Hopefully, my findings can help us better understand the influences of this new technology’s impact on young women,” Niu said.