Research administrator Bob Andresen remembered for his humor and passion

For Robert “Bob” Andresen, research administration was the best job of all, made even better because he could do that job at the University of Wisconsin–Madison, where he was associate director of research and sponsored programs and director of research financial services. He was an employee for 34 years.

He loved his work so much, Andresen wrote a children’s book about it — “The Best Job of All” — available in six languages. Andresen passed away on Nov. 19 at his home in Madison following a brief illness. He was 61. 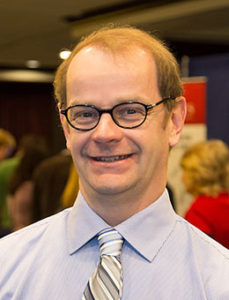 “Bob and I were partners, collaborators and friends,” says Kim Moreland, associate vice chancellor for research administration and director of research and sponsored programs. “He was a gentle soul with a wicked sense of humor and a mind that never forgot a detail. He is deeply missed by all of us at UW, and we will be sharing Bob stories for many years. It was a privilege to work with him.”

Andresen received two degrees from UW–Madison, a bachelor’s and a master’s in business administration. He began working at the UW in 1986, and his skills in leadership and administration grew as his work earned him recognition. At RSP, Andresen was first an accountant and later a manager, directing staff responsible for all areas of financial and non-financial post-award administration.

Throughout his career, Andresen worked directly with faculty and research labs, including from the time they secured funding through the end of their grant period. He also worked with funding agencies and sponsors, including the federal government, state organizations, corporations and nonprofits. He was the UW–Madison audit liaison for all federal and nonfederal audits.

Andresen initiated campus-wide software systems to manage extramural support. In addition, he and his staff were involved in developing and negotiating the university’s finance and administration costs and fringe benefit rates.

“Bob was dedicated to his profession, incredibly respected and a library of knowledge,” says Vice Chancellor for Research and Graduate Education Steve Ackerman. “His work behind the scenes at RSP made our lives as researchers managing extramural funding so much easier and he was a stellar mentor.”

As an expert in his field, Andresen’s reach went well beyond UW–Madison.

He was a past president of the National Council of University Research Administrators and served in a variety of other roles as a professional nationally, including co-chair of the annual Financial Research Administration meeting. He also participated in the Federal Demonstration Partnership, a national association of entities involved in administering federally sponsored research, and the Council on Government Relations, made up of research institutions and medical centers.

In 2016, Andresen led a delegation of university representatives to Cuba to enhance research collaboration among American and Cuban scientists. He taught grants management across the country and in international locations such as Qatar, United Arab Emirates, Saudi Arabia, England, Italy and Russia.

Andresen was known for his humor and passion for traveling, cinema and art — particularly modern art and art glass, Moreland says.

But mostly, he was dedicated to his work and to UW–Madison.

Earlier this year, Andresen received the International Award for Excellence in Research Management Leadership and he was designated a National Council of University Research Administrators Distinguished Educator.

In a 2016 UW alumni profile, Andresen said, “I feel I can help the faculty that are looking for cures for diseases or solutions to social problems by doing what I do best. At the end of the day, it feels good to be part of a research team. You’re dealing with intelligent and passionate people all of the time and you see the outcomes as new technologies and new treatments in the media, and at the end of the day that just makes you feel good.”