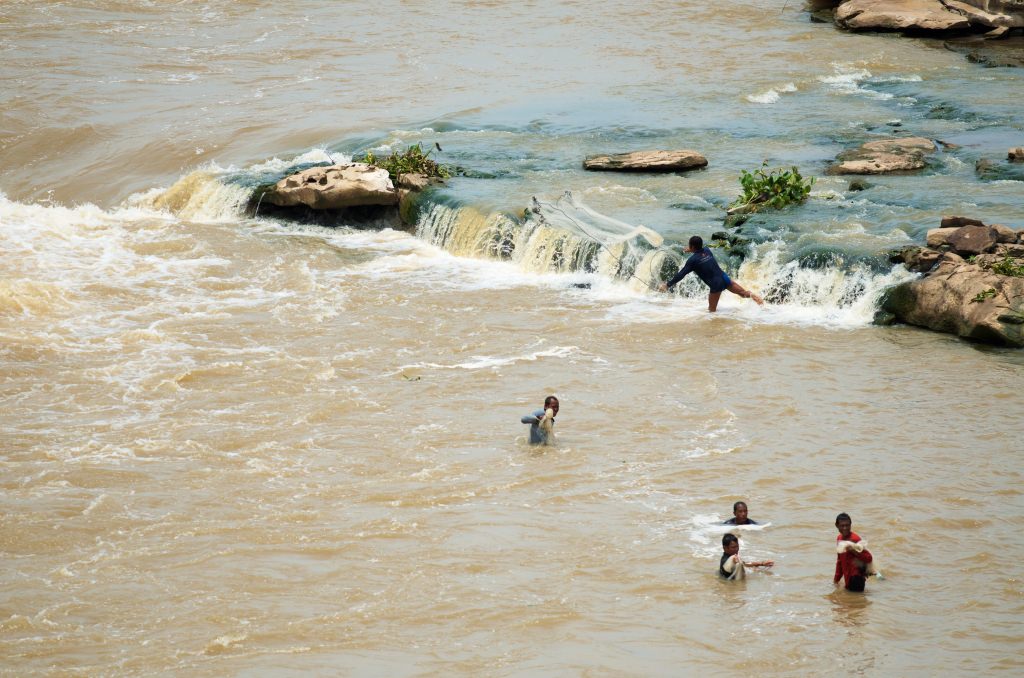 On the Mun River, in northeastern Thailand, several men use cast nets to catch fish upstream of the Pak Mun Dam. The dam was once considered one of the most destructive dam development projects because of its ecological, social and economic impacts. Each year, the government opens the dam gates for four months with the intention of allowing migratory fish to pass upstream to spawn. However, fishermen in the region report continual declines in catch. Photo: Aaron A. Koning/UW–Madison

Freshwater fish play a surprisingly crucial role in feeding some of the world’s most vulnerable people, according to a study published Monday (Oct. 24) in the Proceedings of the National Academy of Sciences.

“It was eye-opening just how many people are deeply dependent on freshwater fisheries as sources of protein,” says Pete McIntyre, a lead co-author of the study and professor of zoology in the Center for Limnology at the University of Wisconsin–Madison. “Many people in poor nations do not get much animal protein to eat, and freshwater fish provide protein for the nutritional equivalent of 158 million people around the world.” 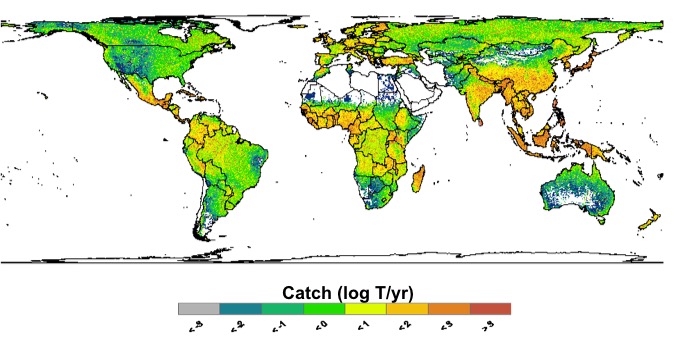 A global map of annual riverine fish catches. The map is modeled based on river discharge (size) and national data on the number of fish reported caught. Courtesy of the study authors

By creating a map of the world’s fisheries documenting where people catch freshwater fish at the highest rates, and then linking it to data about fish biodiversity, ecosystem health, and human nutrition and socioeconomics, McIntyre’s team hopes the study helps put freshwater fish on the radar for decision-makers around the globe.

“When making big decisions, for instance when the World Bank is considering funding a dam project, we think the collateral damage done to freshwater fisheries should be explicitly listed as a quantifiable impact,” McIntyre says.

Freshwater fish provide the majority of the animal protein consumed in countries like Cambodia, Congo and Bangladesh, where large numbers of children under age 5 are considered underweight, the study finds. 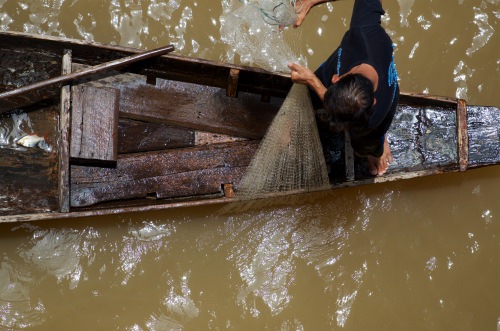 A man pulls a cast net onto his boat from the waters directly below the opened gates of the Pak Mun Dam. In an hour-and-a-half of fishing, the man in the boat pulled up the solitary fish seen here. Photo: Aaron A. Koning/UW–Madison

McIntyre and study co-lead Catherine Reidy Liermann of UW–Madison, along with co-author Carmen Revenga of The Nature Conservancy, found that 90 percent of fish caught worldwide are harvested from rivers facing higher-than-average levels of environmental stress from chemical pollution, invasive species, land use change, and other human factors.

And the rivers where fish are most heavily exploited — for instance, in Asia and Africa — are also where the potential consequences for reduced fish biodiversity are highest, the study team found.

Originally, McIntyre, Reidy Liermann and Ravenga set out to gather a better accounting of the role that fish biodiversity plays in the number of fish capable of being caught in the world’s rivers. 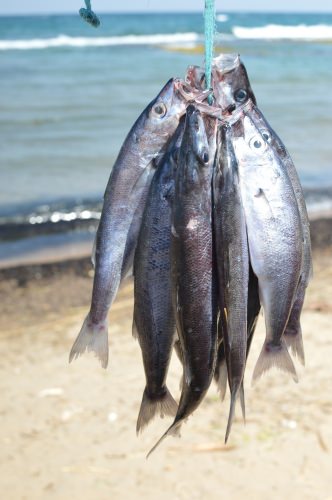 A harvest of fish from an illegal beach seine in Africa’s Lake Tanganyika. For the sake of their own subsistence, local people sometimes resort to using this gear to catch fish along the shoreline. It is illegal because it harvests the young of a species, reducing the number of future adults. Photo: Catherine Wagner/University of Wyoming

“With population and climate change, human dependency on freshwater systems is increasing dramatically in many parts of the world,” says Reidy Liermann. “At the same time, freshwater species are being lost at faster rates than marine or terrestrial species. We wanted to explore the intersection of these trends. How do species diversity and fishery production relate? So we built a model to find out.”

Ecological theory and experimental data from other studies suggest that diverse ecosystems are typically more productive than less species-rich environments. The researchers expected to find that rivers with high fish biodiversity would also be more productive.

Using the best available data — national statistics from the Food and Agriculture Organization of the United Nations — combined with powerful statistical methods, the researchers looked at the relationship between fish catches and fish diversity, ecosystem health threats and human nutritional needs.

To their surprise, McIntyre and his team learned that greater biodiversity does not provide a clear boost to fishery productivity. Rather, the study found that the link between fish catches and species richness is indirect: Catches increase with the size of the river and with human population density, while biodiversity also happens to increase with river size.

The finding actually contradicted earlier results McIntyre gathered but he continued to improve his methods and he is confident in the latest results. 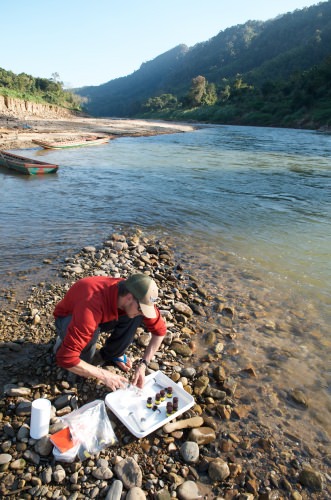 Zoology and limnology graduate student Aaron A. Koning collects water samples at the confluence of the Moei and Salween Rivers on the border of Thailand and Myanmar (Burma). Changes in agricultural practices could affect the region’s ecologically and economically important fisheries, he says. Courtesy of Aaron A. Koning

“A few years ago, we thought we had a different take-home point,” he says. “But we continued to refine the statistics and came to the conclusion that the global data don’t show strong evidence that declines in fish diversity will lead to lower fish catches in the future.”

However, McIntyre is quick to point out: “Although our study does not suggest that modest losses in fish species diversity is a pressing threat to fisheries, the absence of evidence is not evidence of absence of the importance of biodiversity.”

What is clear, the study authors say, is that society should safeguard freshwater ecosystems for the sake of both fish and people.

McIntyre was motivated to pursue these questions, in part, because of the time he has spent living in villages and towns in the developing world while conducting field studies. Over years of research in Venezuela and Tanzania, for example, he has noted that the mesh in fishermen’s nets has become smaller and smaller as the availability of large fish has diminished.

“I have played witness to the demise of several fisheries,” he says. “Once I started making observations like that, I began to ponder what happens to these people if their fisheries collapse. If you ask any fisherman if the fishing is as good now as it was when he or she was a kid, the answer is almost always no.”