Layne Hailu travelled thousands of miles from Addis Ababa, Ethiopia, to UW–Madison with the goal of eventually applying his talents back home to solve real world problems.

“As college students, we are usually uncertain about what we want to do with our lives,” says his friend and May 2022 graduate Sheriff Mohammed Issaka.

“That wasn’t true for Layne,” he adds. “He always knew he wanted to be of service to humanity, especially his home country Ethiopia. Even from freshman year, Layne would talk about working for the African Union to bring change to Africa and the world at large.” 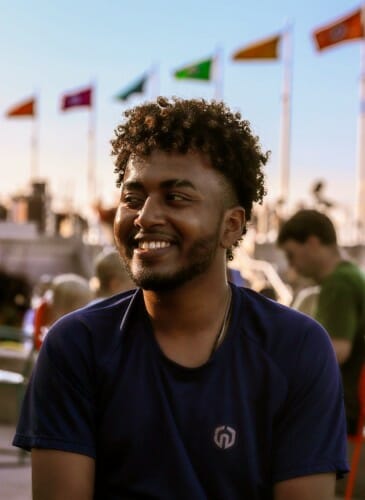 Hailu, a junior who passed away in Madison on Aug. 19, is being remembered by friends as a changemaker and innovator. He was also passionate about sports, music and was known for his infectious smile and generous nature.

Hailu was a member of the King-Morgridge Scholars Program, a tight-knit cohort of high-achieving students from Africa, Latin America, the Caribbean, Southeast Asia and South Asia.

“Layne connected with multiple communities on our campus and was loved by many,” says Vice Chancellor for Student Affairs Lori Reesor. “We’re deeply sorry for his family, friends and fellow scholars.”

In an interview during his freshman year, Hailu shared that he not only felt that life could be better in his community, he felt he could be part of the process of change. Before leaving Ethiopia to study at the African Leadership Academy in South Africa, he used his high school science skills to develop a plan to create homemade refrigerators for his family and neighbors.

As part of the King-Morgridge program, participating students receive four-year scholarships that will enable them to pursue their academic interests and engage with experts in global poverty and international development.

Hailu was pursuing a philosophy major at UW–Madison and was interested in how computer science and economics could be applied to support farming families, agriculture and food availability for communities throughout Ethiopia.

“Layne had so many academic interests, ranging from computer science, entrepreneurship, marketing, economics, philosophy, and arts, all of which he was passionate about and pursuing in different ways.” Issaka says.

“Layne was an individual who gave much of himself to people in the community and those around him,” said Guido Podestá, vice provost and dean of the International Division. “He never hesitated to find ways to help friends and strangers, and had heart and vision that saw him aspire to make change in his home country and beyond.”