A dedicated University of Wisconsin–Madison clinician, educator, advocate and researcher, Renata Laxova, professor emerita of medical genetics and pediatrics, passed away recently after a brief illness. She was 89.

Laxova’s lifelong interests focused on the causes of intellectual and developmental disabilities, prenatal diagnosis of genetic disorders and birth defects, cancer genetics, and — above all — the relationships between medical professionals and the patients and families they serve. She was especially interested in coping strategies for families in difficult situations. 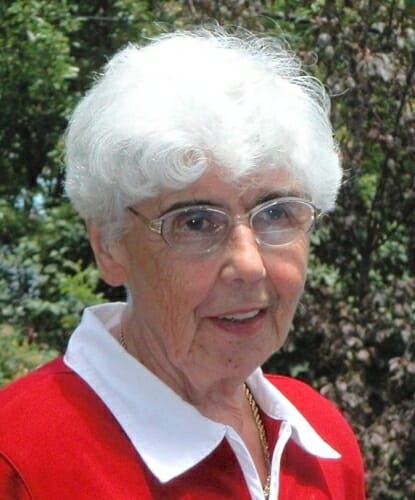 Laxova obtained MD and PhD degrees from the University Medical School in Brno, in what is now the Czech Republic. Initially trained in pediatrics, she later specialized in medical genetics at University College and Guy’s Hospital in London. She came to the United States in 1975 and joined the UW–Madison departments of Pediatrics and Medical Genetics, where she served until she retired in 2000.

A skilled educator, Laxova loved teaching and stressed the importance of making clinical care personal. Understanding that genetics could be an extremely complicated discipline, Laxova worked to build awareness and accessibility through education and experiences. She underscored the importance of the patient perspective and was one of the first on campus to invite parents and families to share with her students their experiences caring for children with genetic conditions or disabilities.

David Wargowski, a clinical geneticist in the Waisman Center Medical Genetic Clinic — a clinic and program Laxova helped build — says Laxova inspired him to pursue a career in genetics. He first met Laxova as a medical student at UW–Madison.

“I found human genetics fascinating in college and was excited to have an opportunity to learn about how it applied to the medical care of people with genetic conditions,” Wargowski says.

“In the mid-1980s, medical genetics was still a field which primarily addressed rare disorders that were off the radar of most physicians. I learned about many of those, but more important to my medical training was learning from Laxova’s example that being a good doctor is about more than being knowledgeable. It also means being compassionate and devoted to patients.”

Patient care was primary for Laxova. Her innate ability to make connections with patients and learn their story set her apart. She is remembered for asking families during clinical visits, “How can we most help you?” — a sentiment that embodied her commitment to patient advocacy and care that also led to her work on resources and supports for families throughout the state.

Responding to concern that many genetic disorders were going unnoticed and undiagnosed, Laxova helped establish the Genetic Contact Network. Within the network, professionals throughout the state identify people in need of genetic counseling and make referrals. These efforts led to the corresponding Genetic Services Network of outreach clinics and Laxova was a driving force behind the service sites in Green Bay, La Crosse and Eau Claire, among others.

At the Waisman Center, Laxova was in charge of the medical genetics program and clinic program and all of its elements — clinical, education and research — long before there was a program director, says Wargowski.

In 1976, Laxova was also instrumental in establishing the master’s in genetic counseling training program with founding director Joan Burns. The training program was among the first of its kind in the United States and Laxova served as its first medical director, a position she held for more than 20 years. During that time, she helped train hundreds of genetic counselors while treating patients and their families in the Waisman Medical Genetics Clinic.

Casey Reiser, director of the Genetic Counselor Training Program, was herself a student in the third class of genetic counselors. Like Wargowski, Reiser had the opportunity to work with Laxova both as a student and colleague.

“She was always animated and enthusiastic when she shared her knowledge with students,” says Reiser. “Renata was an inspiration, a wonderful mentor, and a beloved friend. She will be missed by many.”

While known for the successes of her career, Laxova is also remembered for her experiences escaping both the Holocaust and communism. Laxova twice fled her homeland of the Czech Republic (then known as Czechoslovakia). In the days leading up to World War II, she escaped from the Nazis through safe passage to Britain on the last Kindertransport, which rescued thousands of children from the Holocaust. She returned in 1946.

In the late 1960s, married to her husband Tibor, and as a young mother, doctor and researcher, she once again made her way to Britain to avoid the encroaching Russian communist regime. The couple later moved to Wisconsin, where Tibor, a veterinarian, opened a practice. She joined the faculty of UW–Madison in 1975. Her life’s story is chronicled in a poignant memoir dedicated to her grandson titled “Letter to Alexander.”

Wargowski describes the sentiment felt by many who knew and worked with Laxova.

“If you didn’t know her, I’m sorry you didn’t have that chance,” he says. “She was a remarkably gracious person with an amazing life story. She was absolutely devoted to her patients, her craft and her colleagues, especially those who asked for the opportunity to learn from her. She was a remarkably compassionate person and physician who taught more than genetics. She practiced a love for her patients to which most of us can only aspire, and an intolerance of disparity and discrimination that challenges the most motivated among us.”

University Archives has two oral interviews with Renata Laxova from 2004 and 2008. You can access them here: https://search.library.wisc.edu/digital/AMGNC3S2LPJZPN83