Jack P. Hailman, professor emeritus of zoology at the University of Wisconsin–Madison and well-known experimentalist and animal behaviorist, died at home on Wednesday, Jan. 20, 2016. He was 79.

Hailman’s UW–Madison career spanned 30 years, over which time he mentored and supported numerous colleagues, undergraduates and graduate students; edited the top journals in his field; and weaved together scientific disciplines that in his era were sometimes at odds. 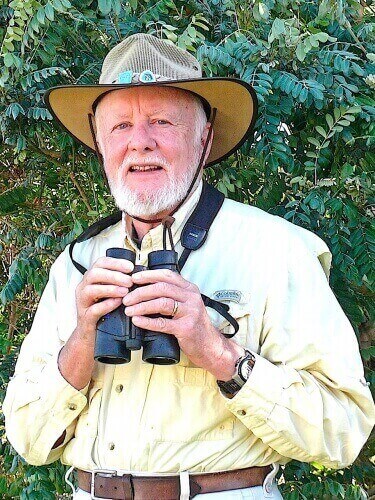 Jack P. Hailman was professor emeritus of zoology and a well-known experimentalist and animal behaviorist. Courtesy of Liz Hailman

Born in 1936 in St. Louis, Missouri, Hailman went to high school in Bethesda, Maryland, where in his sophomore year, he met his future wife Liz. She had tutored him in algebra while he recovered from a bad case of poison ivy.

“That was the beginning,” Liz says. “We were married for 57 years, but we had six years even before that.”

The two were partners from the start. He gathered the data and she recorded it. He wrote the papers and books, and she copy edited them. They traveled the world together and published books on hiking and backpacking. They raised two sons, Peter and Karl, and together welcomed five grandchildren.

They went to separate colleges, Jack to Harvard and Liz to Duke, but later married and moved together to Norfolk, Virginia. There, Hailman fulfilled three years in the Navy following an ROTC scholarship at Harvard, where he studied under the preeminent biologist E.O. Wilson. During those years, he met a zoologist at Duke, Peter Klopfer, prompting him to study laughing gulls en route to a Ph.D. in zoology. Liz says it took him just two and a half years to finish his degree, since he’d already begun to gather data while in Virginia.

From there, Hailman completed postdocs in Germany and at the Institute of Animal Behavior in Newark, New Jersey, where he combined the science of animal behavior with the science of the brain. For three years, he held a faculty position at the University of Maryland and in 1969, he became an associate professor of zoology at UW–Madison, briefly serving as department chair.

“He and I arrived at the same time, but I was a very green assistant professor,” says Chuck Snowdon, UW–Madison emeritus professor of psychology. “I was cautious of him at first because of an antipathy between psychology and biology.”

But that calculated distance soon collapsed, as Hailman became a mentor to Snowdon in the early days of his career, supporting the young scientist as he bridged the gap between psychology and zoology. With colleagues, the two started the highly successful campus seminar series BIDA, the Behavioral Interdisciplinary Association, which ran for nearly three decades.

“Once we got over our initial hesitation of one another, we were good friends,” says Snowdon.

Hailman, too, merged the fields in his research. “The work he did fit the intersection of psychology and biology,” Snowdon says. He studied how instincts are learned in herring gulls, performed seminal work on color perception in animals, and studied black-capped chickadees on Picnic Point, learning that the cheerful species actually possesses grammar and is capable of 1,000 variations of its hallmark chickadee-dee-dee call.

Caring about ‘the whole you’

Hailman led an annual spring break field course to Florida — a transect through spring, says Snowdon — and mentored several faculty members over the years, including Karen Strier, now UW–Madison Vilas Research Professor and Irven DeVore Professor of Anthropology, with an affiliation in zoology. Strier joined the faculty in 1989.

Hailman helped her feel welcome in her early days on campus, orchestrated her zoology appointment, and became a friend as well as a colleague. The pair published a book together — “Planning, Proposing and Presenting Science Effectively” — spending long days working on it in Hailman’s living room, he smoking his pipe and talking about his deep bond with Liz. A first edition led to a second and they were deliberating a third edition before his unexpected passing.

“Jack was someone who I always felt cared about the whole you and not just the scientific part,” Strier says. “I know people would describe him as gruff — he might tell someone their slides needed to be bigger in their presentation — but he was also the one who would go out of his way to tell you how good of a job you did.”

‘He lived a full life’

He retired in 1999 and together they moved to Jupiter Inlet Colony, Florida. He involved himself in studies of the Florida scrub jay through the Avian Ecology Program at Archbold Biological Station in Lake Placid, Florida and published another book, called “Coding and Redundancy.” Snowdon says Hailman loved to crack codes.

In Florida, Liz says he pursued a passion for genealogy, participated in a model railroading club and helped maintain a 50-mile stretch of National Scenic Trail about two hours from their home.“There were a lot of projects that happened,” Liz says. “He lived a full life.”

Hailman was an avid birder and each year, compiled a local Audubon Society Christmas Bird Count in Florida, with its bounty of unique species. Recently, he had begun to pursue seriously his longtime interest in nature photography.

“A good overall description of him is scientist naturalist,” Snowdon says.

Hailman will be missed for the lives and the careers he touched, his family and colleagues say.

“He was a really important person in my career here,” Strier says. “He was a generous colleague and friend.”