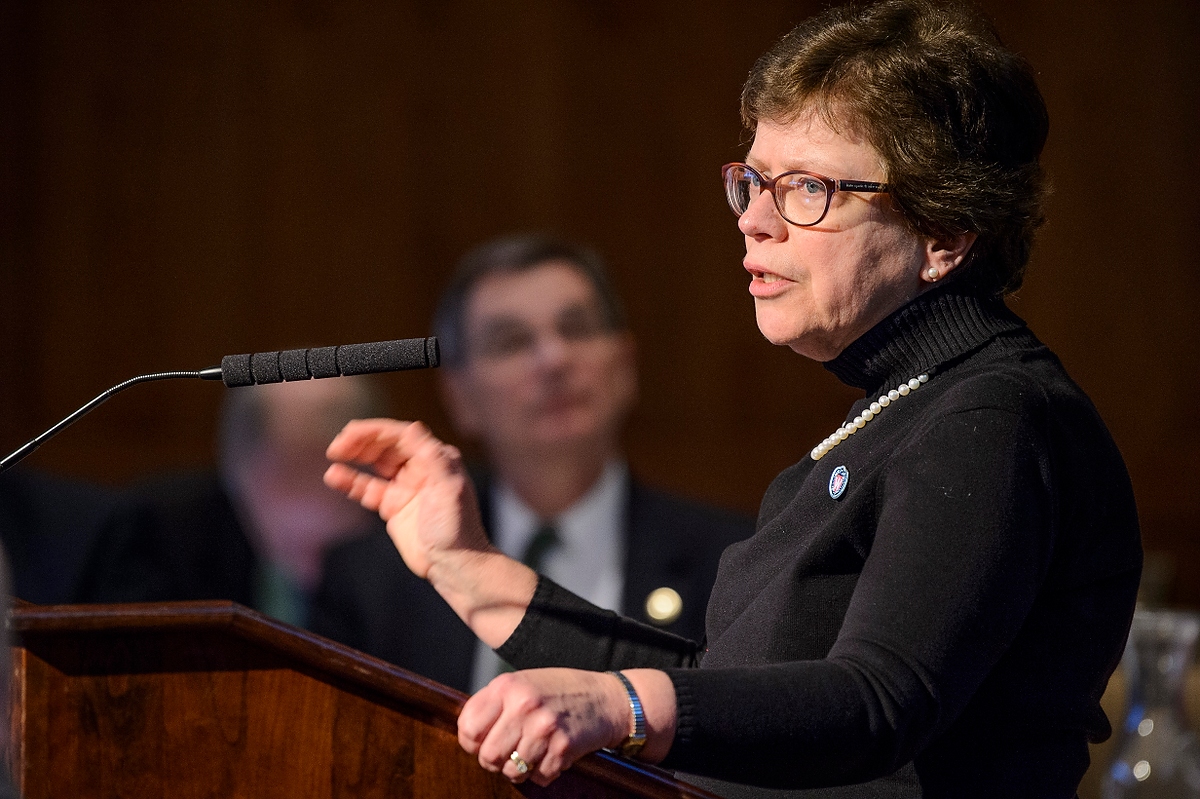 UW-Madison Chancellor Rebecca Blanks speaks to the UW System Board of Regents at Union South at the University of Wisconsin–Madison on Feb. 4, 2016. Photo: Jeff Miller

University of Wisconsin–Madison Chancellor Rebecca Blank highlighted student and faculty achievement in an address to the UW System Board of Regents Thursday, saying that in many ways 2015 was a record-setting year for the state’s flagship university.

And she urged a renewed commitment to keeping UW–Madison among the top public universities at a time when peer institutions are seeing greater investment from their respective states.

The state investment that began 167 years ago helped grow UW–Madison into one of the top 25 universities in the world, Blank said. The university has been nurtured by a partnership between citizens of the state, students, alumni and donors. Maintaining that status will require continued investment by all partners, she said.

“We’ve had a series of difficult years in terms of budget, here at the University of Wisconsin–Madison as well as all the System schools. And that is particularly troublesome because our peers are investing,” Blank said.

Video of the chancellor’s address is expected to be available Friday.

Academically, UW–Madison reached new levels in 2015 in applicants and degrees awarded. More undergraduates are earning their degrees in six years or less than ever before.

In addition, the year saw a host of student and faculty awards, and major research breakthroughs such as the discovery of early human fossils, the engineering of human vocal cords, and the creation of new yeast hybrids.

Meanwhile, the graduation gap between targeted minority students and all students is the narrowest since the university started measuring that statistic. It has dropped to half of what it was a decade ago.

Advancements stretch beyond the classroom as well, Blank said. Nearly two-thirds of current UW–Madison seniors report that they’ve held internships or participated in a program while an undergrad that gave them career experience. More UW students are studying abroad and more participate in public service as part of their classes than ever before.

Blank said the university has put an emphasis on retaining the best faculty despite attempts by competitors to raid the best educators. As an example, she said in the last six months the College of Letters & Science and the School of Education saw a twofold increase in the number of retention cases over the previous year. The median offer was 30 percent higher than the salary the faculty member was earning at UW–Madison.

The loss of faculty would not just be felt in their teaching, but also their research, Blank said. If we’d lost all of the cases in front of us since July 1, we would have lost nearly $18 million in grant funding in just six months.

To date, the university has spent almost $8 million in the past six months to fight off outside offers, and 85 percent of faculty who received offers have been retained, Blank said.

“Most importantly, we want to make it clear Wisconsin is not open for raiding,” Blank said. “I can’t afford not to (counter outside offers). This is the reputation of our university.”

The first, to expand course offerings and enrollment in the summer term, would provide more educational options for students, capture more revenue and better utilize facilities across campus throughout the year, Blank said.

The long-term vision, Blank said, is to treat the summer term like any other semester.

“The world is running 24/7,” Blank said. “A trimester system just makes a lot more sense, with a long summer break.”

Blank said the expansion will require a number of changes in regent policy and state statute, and that a campus faculty committee is going to explore how best to pursue it.

Scholz gave an overview of the Letters & Science Career Initiative, which he described as a new standard for career preparation among the nation’s great public research universities. Central to the effort, said Scholz, is helping liberal arts students identify and articulate skills they may not know they have, including the ability to write well; present with confidence; communicate effectively; and analyze and solve problems.

“My students in the College of Letters & Science have the skills employers want, but many of them don’t know how to talk about the value of their degrees to employers or even to the alumni who might help them,” Scholz said.

A new class for sophomores, “Taking Initiative,” has been a “game-changer,” he says, based on course evaluations from the more than 650 students who have taken it since it launched last spring.

Another key component of the Career Initiative is making connections with L&S alumni who can help students build critical networks and search effectively for internships and jobs. More than 300 alumni have stepped up to become involved in the last two years since the Career Initiative began, acting as mentors and resources for students.

Scholz also mentioned a baseline survey that shows recent L&S graduates, as well as alumni 8-10 years out, flourishing in the job market.

“We just need to launch them higher, sooner,” he says.