Recovering from a heart attack? Hold the antibiotics

The community of microorganisms that live in the human gut has been shown to confer all kinds of health benefits. Now, an international team of researchers has shown in mice that a healthy gut microbiome is important for recovery after a heart attack.

Writing today (Oct. 8, 2018) in the journal Circulation, a team led by surgeon Patrick Hsieh of the Institute of Biomedical Sciences at Academia Sinica in Taipei, Taiwan, in collaboration with researchers from the University of Wisconsin–Madison, reports on experiments that show mice recovering from heart attacks are more likely to die if treated with antibiotics, a common intervention in hospitalized patients. 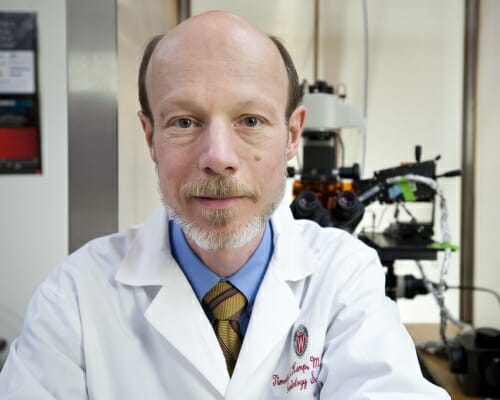 “This is a new thing to add to the list of potential complications” for recovery from a heart attack, says Timothy Kamp, a UW–Madison professor of medicine and cardiologist who contributed to the new study.

It is common, Kamp explains, for hospitalized patients to be dosed with broad spectrum antibiotics to treat a variety of infections, and some of these patients have heart attacks. But antibiotics can be indiscriminate and eliminate not only bad microbial players, but also the microbes we depend on to stay healthy, including the trillions of fungi and bacteria that help make up the gut microbiome.

Working in collaboration with microbiome expert and UW–Madison Professor of Bacteriology Federico Rey, Hsieh and Kamp treated mice with antibiotics to deplete the gut microbiome a week prior to experimentally inducing myocardial infarction or heart attack.

The depleted microbiome, the team found, tamps down the production of a set of three short-chain fatty acids, which are produced as the gut’s community of microorganism’s metabolizes food and which act as important chemical messengers to the body’s immune system.

The diminished response, says Hsieh, “impacts the immune response and the repair response after myocardial infarction.”

Conversely, when the mouse microbiome is restored through a fecal transplant, the researchers observed an uptick in mouse physiological well-being and survival. And in mice that had their microbiomes boosted through the use of probiotics or other interventions prior to a heart attack, increased cardioprotective effects and survival were the hallmark effects.

Previous studies in healthy mice have shown that the microbiome influences gene expression and the deployment of the short-chain fatty acids that help regulate immune response.

The current study showed that production of a small set of short-chain fatty acids was diminished by a depleted microbiome, but there likely are many more players – perhaps thousands – that may also be affected and that play a role in the immune response to a heart attack, says Kamp.

The research also showed that heart attacks themselves influence the health of the microbiome: “We found changes after myocardial infarction even without any antibiotics,” notes Rey. “Your microbiome changes as a result of a heart attack.”

However, the key finding – that a depleted microbiome and its diminished production of short-chain fatty acids blunts recovery from a heart attack –  suggests that clinical intervention to manipulate the microbiome through a more nuanced use of antibiotics and supplementing it with probiotics will help human patients recover faster and more robustly from heart attacks, says Kamp.

He adds that the study also identifies the short-chain fatty acids themselves as a potential therapeutic target to bolster a favorable immune response in the context of cardiovascular disease, one of the leading causes of death in industrialized societies. “The immune system and inflammation play a role in repair from a heart attack. We’ve known about the relationship between the microbiome and immune response. Now we’re getting at how that relationship works after a heart attack.”

The study was supported by a grant from the University of Wisconsin–Madison’s Microbiome Initiative administered by the Office of the Vice Chancellor for Research and Graduate Education.