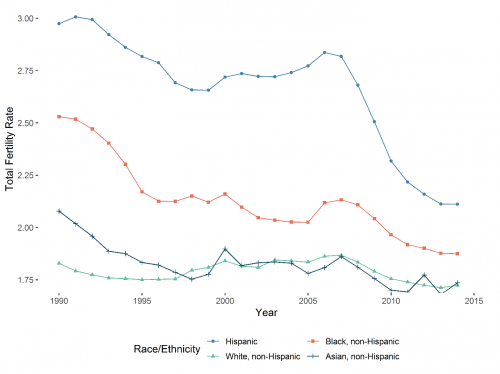 The total fertility rate is a measure of the expected number of children a woman will have during her lifetime. American women’s fertility has generally been declining along with the decrease in manufacturing jobs. Image courtesy of Nathan Seltzer 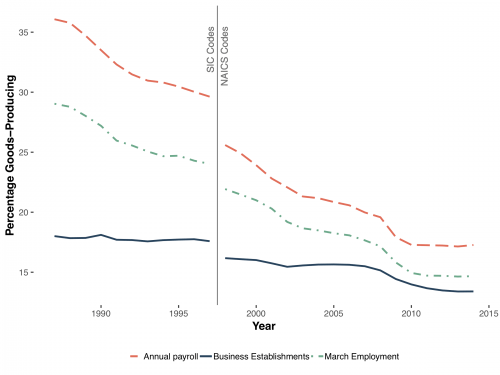 Three measures of the level of manufacturing business activity show a long-term decline over the last few decades. A change in 1998 in how businesses are classified creates a jump in the numbers that year. Image courtesy of Nathan Seltzer

As the Great Recession wiped out nearly 9 million jobs and 19 trillion dollars in wealth from U.S. households, American families experienced another steep decline — they had fewer children.

Yet as employment eventually climbed and wages rose, fertility did not. The fertility rates for American women have continued to decline in the years since the recession ended and reached an all-time low of 1.7 children per woman in 2018.

This continuous decline puzzled scientists, who had previously observed that economic recoveries tend to buoy fertility rates that decline during recessions. The Great Recession seemingly halted that trend.

New research by University of Wisconsin–Madison sociologist Nathan Seltzer identifies a link between the long-term decline in manufacturing jobs — accelerated during the Great Recession — and reduced fertility rates. Analyzing every birth in America at the county level across 24 years, Seltzer found that the share of businesses in goods-producing industries better predicted a metropolitan area’s fertility rate than the region’s unemployment rate.

The link between manufacturing jobs and fertility rates was especially strong for Hispanic women, a larger share of whom work in goods-producing industries than do women from other racial or ethnic groups. Manufacturing business activity was a stronger predictor of fertility than the unemployment rate was for all racial groups.

The results suggest that fertility rates are unlikely to return to pre-recession levels as manufacturing businesses continue to represent a decreasing share of the American economy.

“These structural trends are driving this increased financial precarity and influencing women and couple’s decisions to have children,” says Seltzer, who published his findings this week in the journal Demography. “Metro areas that experienced steeper declines in goods-producing businesses were more likely to experience steeper declines in fertility rates.”

The link between manufacturing businesses and fertility remained even when adjusting for other factors that affect fertility rates, such as education levels, marriage rates and the share of Hispanic women in the U.S. who were born in Mexico, which has been declining.

Seltzer analyzed births from the National Vital Statistics System across all 381 Census Bureau-designated metropolitan areas from 1991 to 2014, an area representing 85 percent of the U.S. population. He converted that data into a measure called the total fertility rate, or TFR, a calculation of the expected number of children the average woman will have in her lifetime based on current birth rates. A TFR of about 2.1 children per woman is required to maintain a stable population size without any immigration.

The Census Bureau provided data on the proportion of goods-producing or service sector businesses in an area. Business numbers provide the most reliable information about job opportunities in an industry.

From 1991 to 2014, goods-producing businesses declined from 18.3 percent of all businesses to 14.2 percent. Seltzer found that this decline accounted for a loss in TFR from a low of 0.08 for white women to a high of 0.21 for black women.

Throughout the Great Recession and subsequent recovery, from 2006 to 2014, manufacturing businesses declined by 2.4 percentage points. Over the same period, Hispanic women’s fertility fell 24 percent. Other racial groups saw a fertility decline of 7 to 8 percent.

Seltzer found that the loss of goods-producing businesses during this period accounted for a quarter to almost half of the decline in TFR for women, depending on their race or ethnicity. The unemployment rate explained a much smaller fraction of these fertility declines. 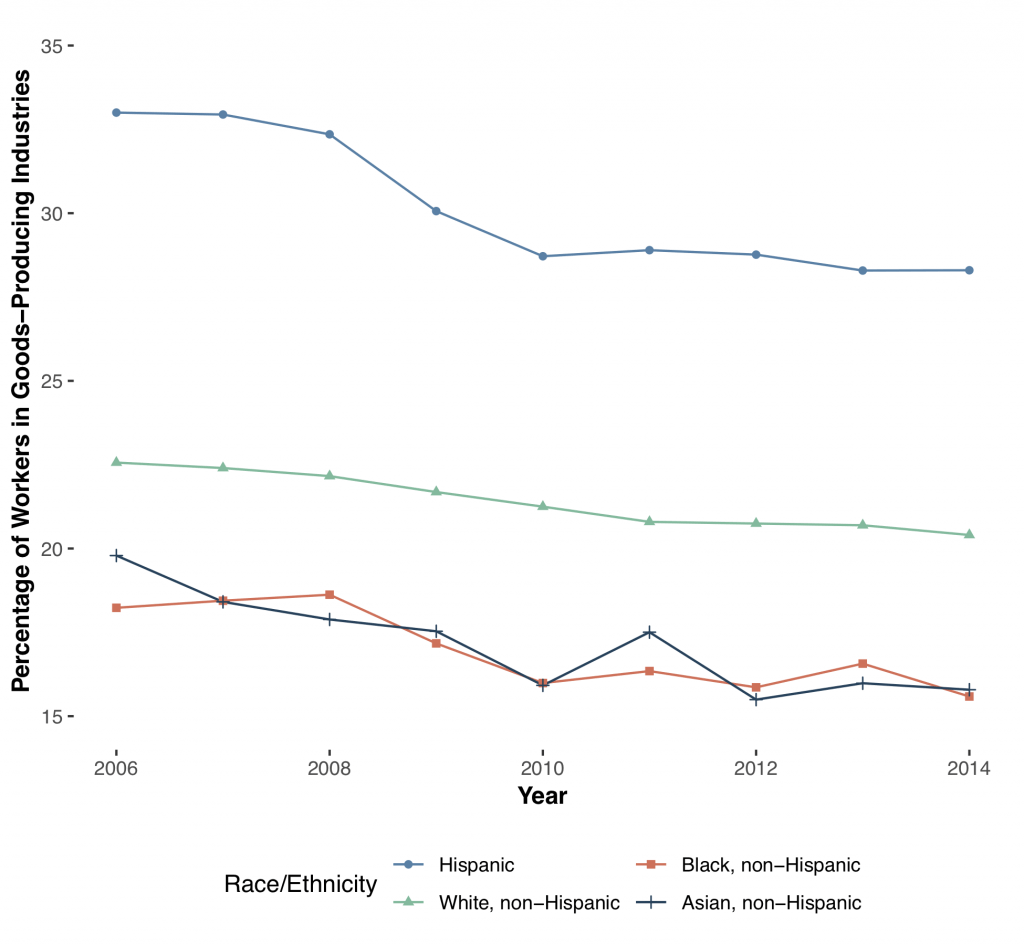 The percentage of workers in goods-producing industries broken down by race or ethnicity. Image courtesy of Nathan Seltzer

“Once you account for the share of goods-producing businesses in an area, you find that it better explains declines in fertility than the unemployment rate does,” says Seltzer, a doctoral candidate in the sociology department.

This is the first study to compare how structural changes in the economy and cyclical changes in unemployment rates affect fertility nationwide. Earlier studies had identified transient effects on fertility based on a glut of foreign imports or the effects of local oil booms. Most previous research focused on links between cyclical recessions and fertility without accounting for long-term economic trends.

It remains to be seen whether the record-low TFR represents delayed or foregone childbearing. A full account of a generation’s fertility is only possible after women pass their childbearing years, designated as ages 15 to 49. But even a temporary drop in childbearing can reduce lifetime fertility for a particular population.

Fertility, in turn, affects many social and economic factors, such as the available workforce and the support of social welfare programs such as Social Security.

“U.S. manufacturing is what built the middle class,” says Seltzer. “As those industries have declined, there’s been little growth in jobs at a comparable skill and income level. Increasingly, people have to find work in the service sector that provides worse pay and less financial stability.”

“In the U.S. right now, there’s this sense that the economy is growing, unemployment is down,” says Seltzer. “Despite these positive economic indicators, we’re still going through this transition of deindustrialization that leads to more precarious work for many people.”

This work was supported by the Eunice Kennedy Shriver National Institute of Child Health & Human Development. 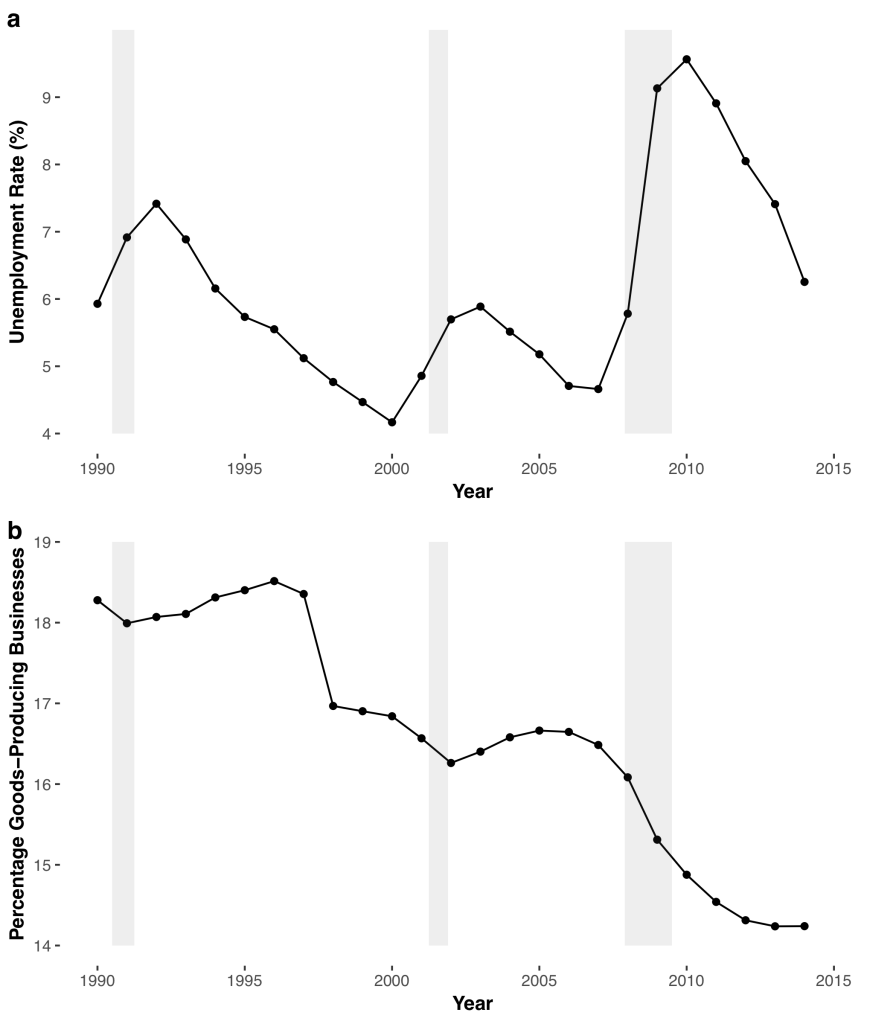