Hannah Carey, a University of Wisconsin–Madison researcher who studies hibernating mammals, became the new president of the Federation of American Societies for Experimental Biology on July 1.

FASEB was formed in 1912. It now represents 29 scientific societies with a membership of more than 130,000 researchers worldwide. 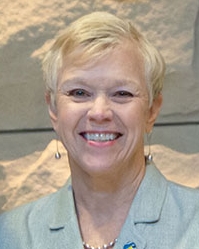 Carey is a professor of comparative biosciences in the UW–Madison School of Veterinary Medicine. She directs the Biotron Laboratory, which provides controlled environments for plant, animal and materials research and testing.

The new president answers several questions in this edited interview:

Q: You’ve worked on hibernation for most of your career. What is the most significant result from that work?

A: We and our colleagues have demonstrated that a natural adaptation that enables some mammals, including bears and ground squirrels, to survive a long winter dramatically changes their physiology and metabolism during a period when they neither eat nor drink.

We’re still pursuing the ultimate roots of this adaptation, but we’ve shown that it helps a variety of tissues resist tissue damage caused by the stoppage and restoration of blood flow. This so-called reperfusion injury can occur during surgery, organ transplants, strokes and heart attacks, to name a few, so it’s got practical importance.

It’s surprising. This stress resistance can persist when hibernating squirrels are in the aroused phase, when body temperature returns to normal levels for brief periods throughout the winter. And while we still don’t know how to apply this stress resistance in medicine, hibernation still has lessons to teach. We are now studying how the microbial population in the gut changes with hibernation status and how those changes affect the animal’s biology.

Q: What do you bring to the FASEB position, and why would you spend valuable time on federation activities?

A: I’ve been involved in one way or another with professional scientific societies for all of my career in Madison. I am a past president of the American Physiological Society, one of the founders of FASEB. I view serving the organization as a way to help maintain our discipline’s voice in science policy, advocacy and research funding. And it helps pay forward by supporting the next generation of scientists.

I was encouraged to run based on my experience, which included five years on the FASEB board. Also, only four other women have served as president of FASEB, and it’s important to have women, and other underrepresented groups, in scientific leadership roles.

Q: As you ponder the role of science in public life, how do you deal with changing public attitudes toward data, facts and evidence? All of these are fundamental to the scientific enterprise.

A: This is exactly why it’s important that scientists take time to speak to the public, and to meet elected officials in their districts or on Capitol Hill. We need to explain in a concise, understandable way what we do and why it has value. Professional societies can make this task easier.

If the scientific community keeps to itself, people may not understand how we strive to generate significant, accurate and repeatable results that can lead us to reliable conclusions about the world around us, including how living beings like ourselves work. We must continue to develop better ways to help the public understand what we do and why it matters.

Q: How else is FASEB working on the credibility issue?

A: One focus is reproducibility. Generating and reporting methods and results that other investigators can reproduce is the crux of the scientific method. However, legitimate questions have arisen about rigor in science. FASEB’s recent report, “Enhancing Research Reproducibility,” addressed this issue through a series of dialogues with member scientists, federal agency representatives and other experts to consider ways to enhance reproducibility and address public concerns. These recommendations were distributed widely to researchers, institutions, professional societies, journals, federal funding agencies, as well as on Capitol Hill.

The benefits of science — to health, the economy, to society — are all around us, but we can’t assume that everybody is familiar with them. And at the bottom line, it’s largely taxpayer money that supports our nation’s scientific enterprise. We owe this.