Chancellor Rebecca Blank and Provost Sarah Mangelsdorf recently announced that Paul Robbins has received the new title of Dean of the Nelson Institute for Environmental Studies, effective March 1. Robbins has served the institute as its director since July 1, 2012. 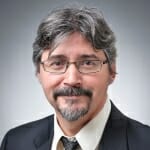 The title change comes on the eve of the Nelson Institute’s 50th anniversary on the UW–Madison campus.

“This title change is well-deserved and was made in recognition of his outstanding leadership and strategic vision, as well as the important role of the Nelson Institute for Environmental Studies at our institution,” Mangelsdorf says.

Robbins has years of experience as a researcher and educator, specializing in human interactions with nature and the politics of natural resource management. He has taught topics ranging from environmental studies and natural resource policy to social theory.

The Nelson Institute, founded in 1970 and renamed in 2002 for former Wisconsin U.S. Sen. Gaylord Nelson, is dedicated to interdisciplinary environmental scholarship, education and community engagement. It includes four research centers — the Center for Climatic Research; the Center for Culture, History, and Environment; the Center for Sustainability and the Global Environment; and the Land Tenure Center.

Robbins graduated from UW–Madison with a bachelor’s degree in anthropology. He also holds a master’s degree and doctorate in geography, both from Clark University.