Did ‘On, Wisconsin’ originate as a Civil War battle cry 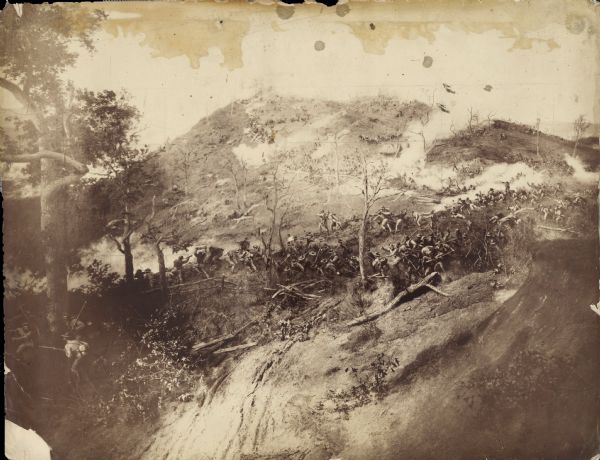 The Battle of Chattanooga from the Milwaukee-based American Panoramic Company’s cyclorama “The Storming of Missionary Ridge.” Courtesy of the Wisconsin Historical Society

With the Badgers heading to the Big Ten championship this year, and maybe even the College Football Playoff, there are a lot of opportunities to say “On, Wisconsin.” But do we know what the phrase means and where it comes from?

According to one version, long before “On, Wisconsin” was used to pump up Badger fans, it was used as a battle cry in the Civil War.

General Douglas MacArthur, the son of Arthur MacArthur, told this story of the phrase’s origins, although historians note that it hasn’t been confirmed elsewhere.

At the Battle of Missionary Ridge in Chattanooga, Tennessee in 1863, the Union Army was “exposed to concentrated fire” from Confederate soldiers at the top of the hill, according to Life Magazine. The battle took place Nov. 25, 1863 — 154 years ago this Saturday. 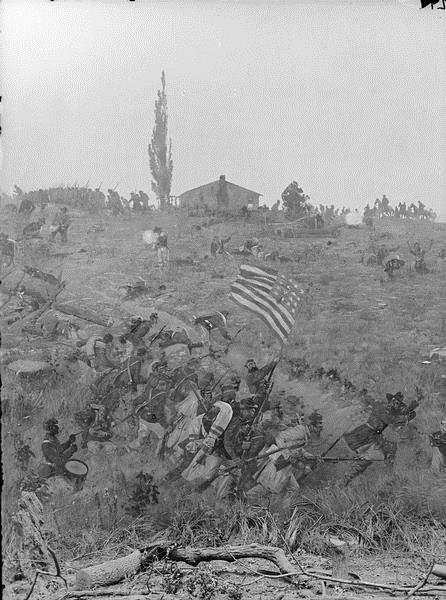 Stereograph from the Panorama of the Battle of Missionary Ridge, Confederate General Braxton Bragg’s Headquarters, painted in 1885. It was painted by Eugen Bracht’s Berlin-based panorama company and first exhibited in Kansas City in 1886. It was destroyed by a tornado in Nashville, Tennessee. From Bennett’s series “Wanderings Among the Wonders and Beauties of Western Scenery.” Courtesy of the Wisconsin Historical Society

The Union soldiers weren’t sure whether to go forward or back, but adjutant MacArthur took up the Wisconsin flag and charged forward, yelling “On, Wisconsin.”

“Above the roar of battle, that well-known adjutant’s voice: ‘On, Wisconsin.’ … Shouting, cursing, foot by foot, they struggle forward,” Life Magazine writes. “And then, suddenly, on the crest, the flag! Once again that hoarse cry: ‘On, Wisconsin!’”

MacArthur carried the flag up the rest of the hill and planted it at the top.

That spontaneous uphill charge allowed the Union Army to capture a seemingly impenetrable position. They broke through the Confederate ranks and won the Battle of Missionary Ridge.

For seizing the colors of his regiment at that critical moment, and planting the flag at the crest of the ridge, MacArthur received the Medal of Honor. He was also promoted from first lieutenant to major and given command of the regiment. 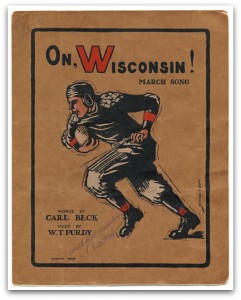 Forty-six years later, “On, Wisconsin,” composed by W.T. Purdy, was introduced as UW–Madison’s football fight song in 1909. Purdy was going to enter the melody in a competition for Minnesota’s fight song, but Carl Beck, a former UW student and Purdy’s roommate, convinced him to dedicate the song to Badger football, with the famous lyrics “On, Wisconsin.”

But those words aren’t simply the lyrics of our fight song: They’re a battle cry, used to embolden Civil War soldiers to move forward — “on” — and overcome their enemy.