Taking a hint from archaeology, where centuries-old bones and teeth have been found to harbor intact biological proteins, a team of Wisconsin scientists has devised a way to deliver drugs and other therapeutic agents by coating medical devices with a nanostructured mineral sheath that mimics bone.

“You can take bones or teeth that are centuries old and extract viable proteins,” explains William Murphy, a University of Wisconsin–Madison professor of biomedical engineering who led a team that developed a new way to seed biomedical devices with proteins like growth factors, agents that promote tissue growth and healing. “The idea was, could we create a material that mimics bone’s ability to stabilize proteins?” 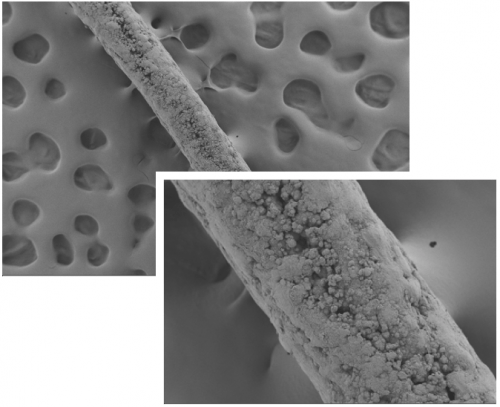 Writing this week in the journal Advanced Materials, Murphy and his colleagues describe a strategy to stabilize proteins by protecting them in a nanostructured bonelike mineral coating. The coating, applied to medical devices ranging from surgical thread to joint implants, stabilizes the proteins, which can then be released over time to promote healing.

Proteins are large molecules, each with a unique function. They not only compose components of the body, but also underpin the basic function and structure of the cell. Among the key proteins are enzymes, hormones, antibodies and growth factors, all of which can have medical applications.

“Many drugs are protein drugs that need to be delivered over a long period of time,” says Murphy, who also co-directs UW–Madison’s Stem Cell and Regenerative Medicine Center.

But delivering proteins can be tricky, he says. Because they are big molecules, and because their biological activity depends on complex intramolecular folding and structures, they are subject to change and degradation, which can neutralize their therapeutic value. 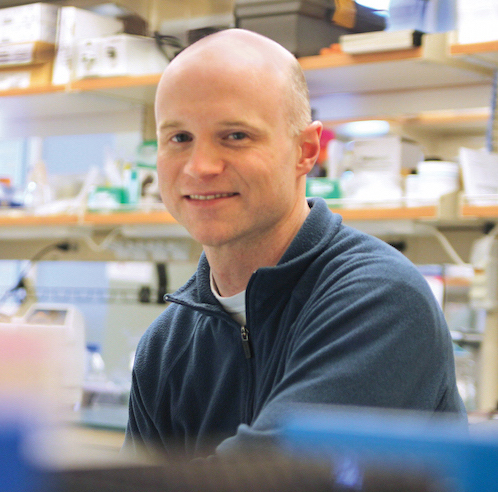 “Proteins tend to get denatured or destabilized, and that can be especially true for sensitive proteins like growth factors,” Murphy says.

However, the discovery of active proteins locked inside bones and teeth that are hundreds of years old inspired Murphy and his team to try to devise bonelike coatings that could both stabilize sensitive proteins seeded into medical devices and permit their sustained delivery to a patient.

“What’s more extreme than death and burial?” asks Murphy. But protected by bone, “they can sit there for centuries and remain intact.”

Murphy’s team, led by Xiaohua Yu of the UW School of Medicine and Public Health’s Department of Orthopedics and Rehabilitation, created mineral coatings that mimic bone. Applied to sutures coated with growth factors, the material was shown in an animal model to stabilize the proteins and promote wound healing by delivering growth factors to the site of the wound in a sustained manner. 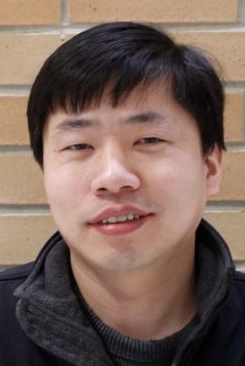 The coatings devised by Murphy’s group, whose work was supported by the National Institutes of Health and the National Science Foundation, are structured at the nanoscale to mirror bone structure. That’s important, says the Wisconsin scientist, because proteins like growth factors bind within the structure of bones, keeping them intact and functional. “We saw a dramatic ability of the mineral to stabilize the protein, even when we challenged it with some extreme conditions.”

Murphy believes the new technology has inherent advantages over the polymers now used to coat medical devices and deliver drugs.

The technology, he adds, also has other potential applications in the area of biotechnology. It can be used, for example, to coat containers used for biological samples like blood and urine, maintaining the stability and activity — and thus, the integrity — of the proteins in the samples.