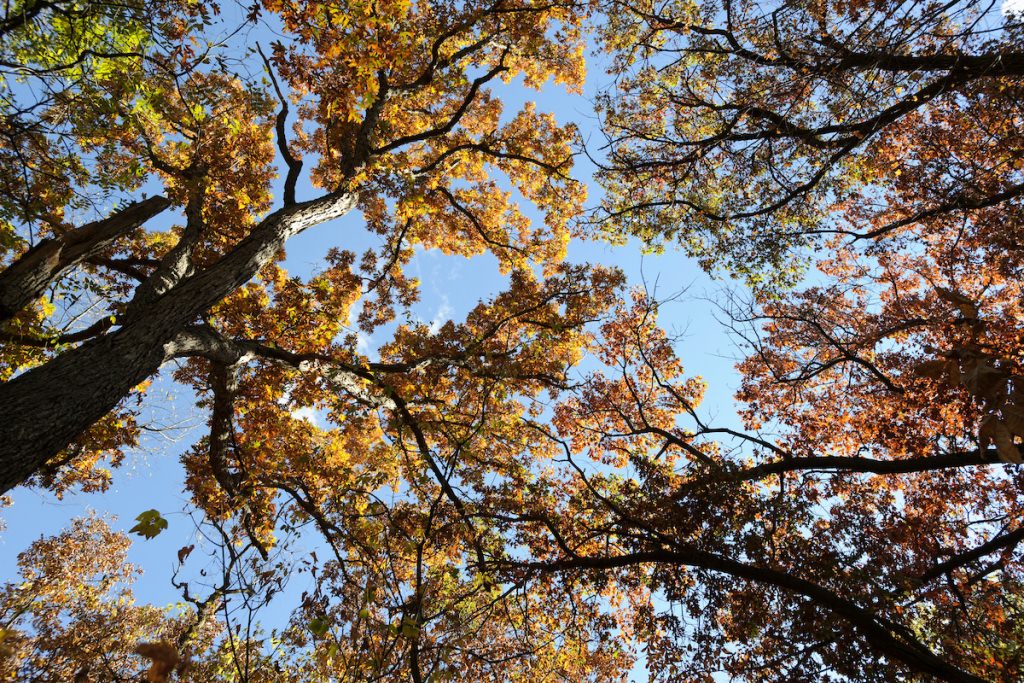 The sun shines through oak trees at the UW–Madison Arboretum. Photo: Jeff Miller

If you want to get a neighbor’s attention, start cutting down some of their favorite trees.

That was a lesson the University of Wisconsin–Madison Arboretum quickly learned 25 years ago as it began an ambitious oak savanna restoration project along its northwestern border. As Arboretum staff worked to free ancient oaks from overgrown trees, the nearby Dudgeon Monroe neighborhood voiced concerns over the changes to the natural area they had come to consider their own. Early tensions quickly eased as the Arboretum recruited volunteers and leaders from the neighborhood to partner in restoring this endangered ecosystem.

The Wingra Oak Savanna still thrives today, supported by neighborhood volunteers and an expanding list of community partners that help maintain and expand the restoration. A tour on Aug. 20, meeting at the parking lot at Arbor Drive and Monroe Street. at 1 p.m., will explore the site and the plants and animals that live there.

Oak savannas once blanketed 5.5 million acres of Wisconsin but are now restricted to just one-hundredth of one percent of their original range. Like prairies, savannas thrive on regular fires, which pare back most trees, leaving only sparse, expansive oaks that can withstand the burns. A diverse prairie-like collection of grasses and other plants fills in the spots between the oaks.

By the early 1990s, the old, savanna-grown oaks near Monroe Street were hidden by tall, thin oaks and weedy trees like cottonwood and box elder that had closed in the canopy. The Arboretum’s work to clear out the brush and overgrown trees from around the original oaks caught the attention of residents in the Dudgeon Monroe neighborhood across the street. The woods had become a welcome retreat, one which neighbors were reluctant to see change or disappear.

“This project is a great example of Aldo Leopold’s land ethic and the Wisconsin Idea in action.”

“We had to talk to people quite a bit about what a savanna was, why we’re trying to restore it, and why we wanted to get rid of the invasive species.” says Molly Fifield-Murray, a retired Arboretum outreach and education manager who began the Wingra Oak Savanna restoration in 1992. “We had a lot of meetings with people walking around the restoration area to show them what we might do.”

To convince some skeptics that the dense woods were not the natural state of the ecosystem, Fifield-Murray demonstrated how recently the new, weedy trees had grown in.

“There was a big cottonwood there that looked like it was as big as the oak trees, and when we cut it down to uncover the oaks, we counted the rings and showed it was 40 years old — when the oak trees were maybe 200 years old,” says Fifield-Murray.

The neighborhood association soon became active partners in the restoration project. Residents donated plants to fill in the cleared areas between the oaks and volunteered to pull weeds. With limited staff, the Arboretum recognized how vital the new partners were in restoring the savanna. Fifield-Murray designed a team leader program to train the most committed volunteers to lead their fellow neighbors in monthly work parties.

“It’s in my neighborhood; I can go and look at it any time I want and feel a little bit of interest and ownership with how the project is going,” says Schuyler Baldwin, a Dudgeon Monroe resident who has been a team leader since the beginning of the Wingra Oak Savanna restoration. “I think that one of the things that is appealing about this project is its accessibility.”

“Team leaders are out there as advocates and ambassadors for the university as a whole,” says Marian Farrior, the current restoration work party manager and coordinator of the team leader program, which has expanded to encompass many of the Arboretum’s restoration projects. “Even when they’re not out there leading work parties, they talk to people about what happens at the Arboretum, explain restoration to people, and get involved with projects elsewhere in the Madison area. They also learn essential leadership skills based on UW’s leadership programs.”

During the initial restoration, the Wisconsin Historical Society found 4,000-year-old artifacts from Native American communities that had inhabited the site. When Europeans settled the area, the Ho-Chunk occupied the site and relied on two springs that flow through the area.

Over the years, community partnerships have expanded to include the Wingra School, Friends of Lake Wingra, and Wingra Boats. More than 90 different groups have volunteered at the restoration since 2002, including classes from Edgewood College and UW–Madison.

Research by Arboretum ecologists John Curtis and Virginia Kline helped Fifield-Murray identify which plants to restore between the oaks. The Wingra Oak Savanna has also served as a resource for research by UW­–Madison botanists Mark Leach and Tom Givnish into the effects of restoration and how different light availability impacts plant diversity.

“Community members who have been part of the Wingra Oak Savanna project really get a sense that they are a part of this bigger community that includes not just people, but the land, the soil, the water, the plants, and the animals,” says Judy Kingsbury, volunteer program coordinator for the Arboretum. “And the Arboretum has an expanded notion of its community — that it goes beyond the boundaries of our property and into Madison.”

“This project is a great example of Aldo Leopold’s land ethic and the Wisconsin Idea in action.”