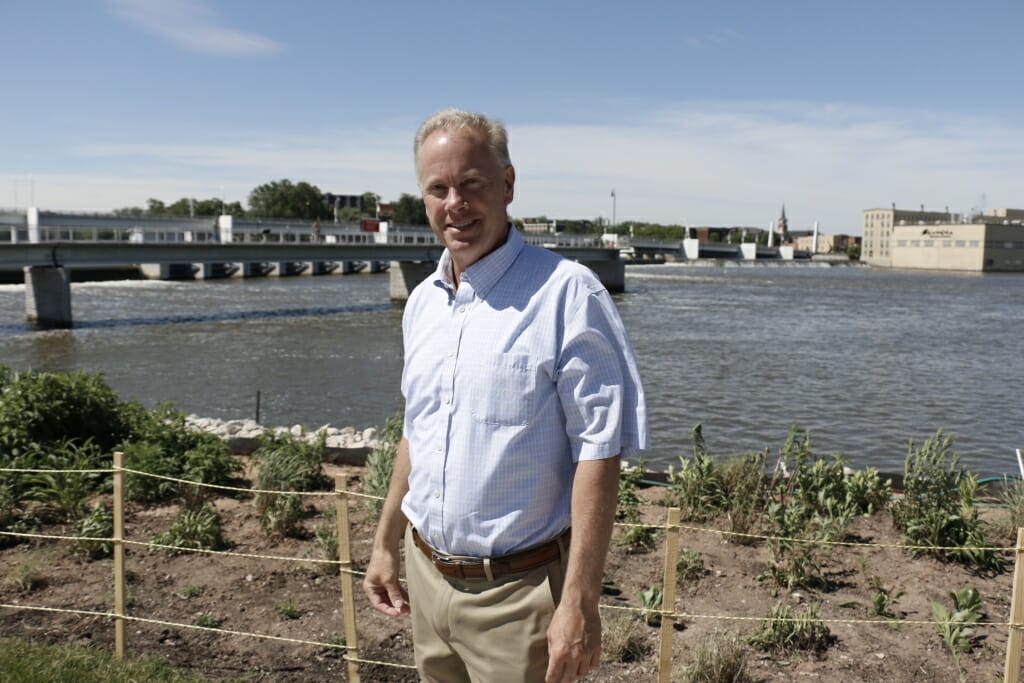 “You need a consistent commitment to improvement,” says Lawrence Delo, De Pere city administrator, standing in front of the city’s pier in the Fox River. “If it’s infrastructure, recreation, a community event or something esthetic, it has to be better, and then you have to keep building on that.” Photo by David Tenenbaum

As rural Wisconsin communities lose young adults, their departures are a threat to community vitality, even survival. During the years 1990 to 2010, the percentage of adults 20 to 39 years fell 22 percent in the median municipality in Wisconsin.

But last year, UW–Madison researchers found that 15 percent of rural Wisconsin communities had a stable or rising percentage of young adults.

The study, directed by Randy Stoecker, a professor of community and environmental sociology, looked at all Wisconsin towns, villages and cities, then explored why 12 communities across the state had avoided the exodus.

Some of the explanations were unsurprising, such as good schools and affordable housing. Another common element was access to a larger city via an interstate highway.

To get more detail on what drives retention, we visited two of those cities – Omro and De Pere — and talked to outsiders, insiders, and “boomerangers” who left in their 20s and returned in their 30s.

Bree Goodearle, who moved to Omro from Berlin, Wisconsin, about 10 years ago and now works at the community center, found the home she sought. “I love the community and what it has to offer,” she says. “Everything fits together like a puzzle; one thing offers to the next. My son’s education fits into his activities, and those activities fit my schedule. My schedule fits my work and my work fits the community.” 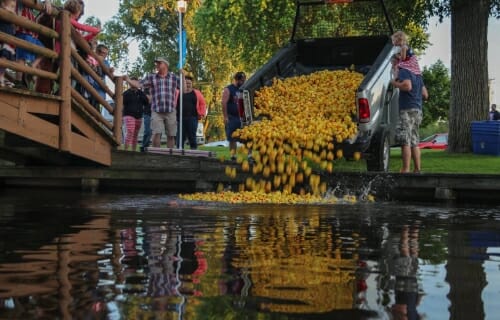 A spirit of volunteerism powers Omro, population approximately 3,500. The town is eight miles west of Oshkosh, where many residents work. “If the school needs something, the fire department may have the expertise and they will volunteer it,” Goodearle says. “If we need bleachers for an event, maybe the school district has them. It’s all fluid and small-towny, and it works.”

Like Omro, De Pere (population 25,000) shares frontage on the Fox River and is focusing on restoring historic buildings. But De Pere is much larger, and is home to St. Norbert’s College, with its new campus of the Medical College of Wisconsin.

In 2012, De Pere built a 300-foot sight-seeing pier jutting into the Fox adjacent to Voyageur Park, a 22-acre mecca that, in turn, touches the Fox River Bike Trail. Even on a weekday, the playground is abuzz with children. Nearby, a mural is being painted on a store, and an unsightly wall facing the river is being targeted for an aesthetic overhaul.

The city’s charms matter, says Andrew Pantzlaff, who moved there five years ago and works in communications for the city.

“De Pere appealed to me because it strikes this appealing, rare balance of having the quaint charm and safety of a small community while being large enough to offer so many amenities and things to do,” Pantzlaff says. “For the few commodities or amenities that don’t exist in De Pere, there’s such easy, quick access to get to them in neighboring bigger cities like Appleton and Green Bay.” 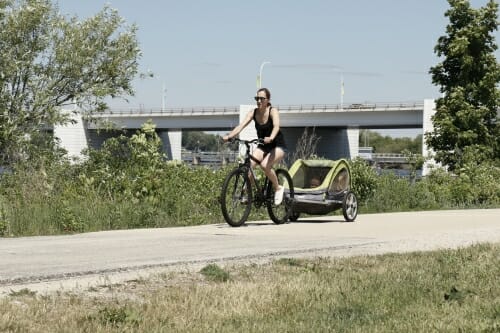 De Pere looks to build on its strengths, says Kim Flom, development services director. “You need to be a little reflective of who you are and who you want to be.”

But it also eyes national trends, she adds. “There is this overriding trend toward ‘third places,’ meaning any business space that can be a gathering space.”

It’s not just coffee shops. “It could be a co-working space, a gallery, or a place with art on the wall or live music on the weekend. The goal is to create space to bring people together in an informal way so they can interact.” 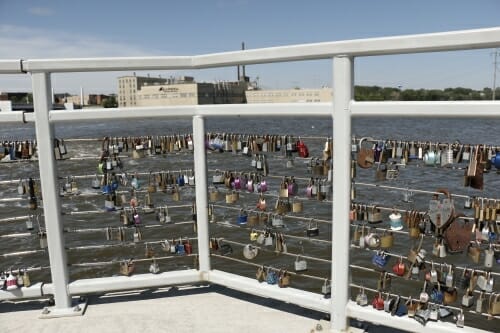 Geography – especially proximity to a larger city — was an important factor in Stoecker’s results on the 12 attractive communities. “To have rural development that happens in the way people want it to happen may depend on urban development. It’s a real symbiosis.”

Such nearness is part of Omro’s secret, says Racine. “As much as some people may dispute it, it’s the proximity of Oshkosh that helps explain our success. But we are not Oshkosh, we are a more bedroom community, and that allows us to have our own rural culture that is small, safe, with a historic element and this strong connection to each other.”

Strong organization and a compelling natural setting also play a role. For example, Hayward, one of the 12 cities, has a growing young adult population and has become a tourist destination, based largely on the American Birkebeiner ski race.

To Stoecker, that success reflects a “real community with a whole bunch of events that people organize themselves around, with a very strong culture of outdoorsiness. I think about community as a place where people do a lot of things together.” 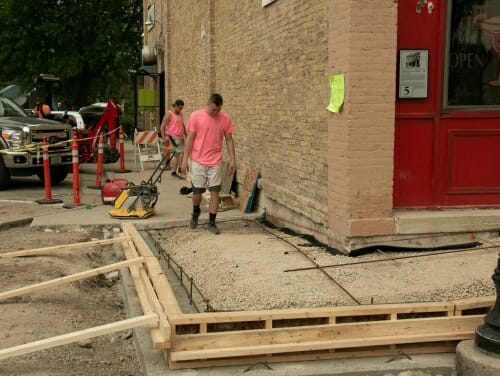 Work continues on sidewalks on the commercial block in Omro that will gain a new patio on the Fox River. The sign on the historic building is one of 50 recently placed in this city, located eight miles west of Oshkosh. Photo by David Tenenbaum

Piece by piece, and staying within its means, Omro grows and builds on its strengths. The city is rehabbing downtown storefronts with an eye on the Fox River. “Enhancing the waterway was identified by Wisconsin Main Streets,” says Racine about the state-sponsored program to improve downtowns.

“We realized Omro did not have any patios on the riverfront, and here was an opportunity to put in seating on the river, but we needed ADA [Americans with Disabilities Act] access, and so the city, with Future Omro [the downtown development association] and the industrial park all contributed. We raised $75,000 in funding or pro bono work, which should be finished in time for the July 4 celebration.” 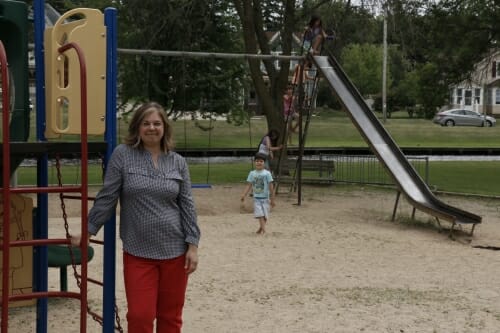 Dana Racine directs the Future Omro Program and plays several other roles in community development. She says historic buildings and the Fox River as two key assets for making the community more attractive to young adults – and everybody else. Photo by David Tenenbaum

“We really appreciate the positive attention that the UW–Madison study has brought us,” Racine adds.

Although the recent publicity has focused on young people, De Pere’s agenda is different, says city administrator Lawrence Delo. “More than attracting a certain age group, we see a strong similarity between what the 20-to-40s like and what the baby boomers like: the same amenities, the quality of life, beauty, atmosphere, safety, transportation. I don’t know if it’s so important to focus on retaining that age bracket as on making a good place for all ages.”