As Americans begin pulling up their sleeves for an annual flu vaccine, researchers at the University of Wisconsin–Madison have provided new insights into an alternative vaccine approach that provides broader protection against seasonal influenza.

In a study published in Cell Reports Medicine today (Sept. 22), scientists describe a T-cell-based vaccine strategy that is effective against multiple strains of influenza virus. The experimental vaccine, administered through the nose, delivered long-lasting, multi-pronged protection in the lungs of mice by rallying T-cells, specialist white blood cells that quickly eliminate viral invaders through an immune response. 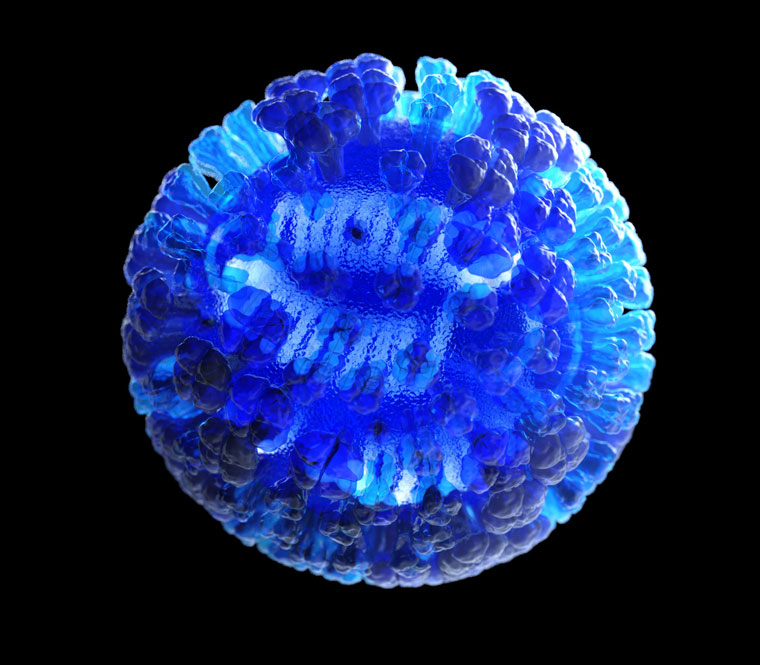 This three-dimensional, semi-transparent rendering of a whole influenza virus shows both the clover-like surface proteins on the outside of the virus, as well as the internal ribonucleoproteins on the inside. Existing influenza vaccines introduce proteins found on the surface of flu viruses to help induce immune protection. A new study by researchers at the UW School of Veterinary Medicine uses an internal nucleoprotein to stimulate the immune system in an effort to create a universal flu vaccine. Centers for Disease Control and Prevention

The research suggests a potential strategy for developing a universal flu vaccine, “so you don’t have to make a new vaccine every year,” explains Marulasiddappa Suresh, a professor of immunology in the School of Veterinary Medicine who led the research. The findings also aid understanding of how to induce and maintain T-cell immunity in the respiratory tract, a knowledge gap that has constrained the development of immunization strategies. The researchers believe the same approach can be applied to several other respiratory pathogens, including the novel coronavirus that causes COVID-19.

“We don’t currently have any vaccine for humans on the market that can be given into the mucosa and stimulate T-cell immunity like this,” says Suresh, a veterinarian with specialty training in studying T-cell responses to viral infections.

The strategy addresses the Achilles’ heel of flu vaccines, which is to achieve specific antibody responses to different circulating influenza strains annually, by harnessing T-cell immunity against multiple strains. In particular, the new approach calls into action tissue-resident memory T-cells, or TRM cells, which reside in the airways and lining of lung epithelial cells and combat invading pathogens. Like elite soldiers, TRM cells serve as front line defense against infection. 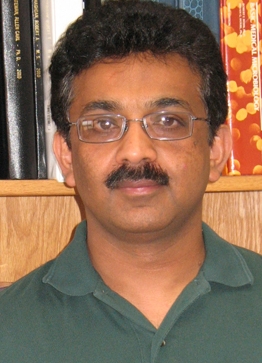 “We didn’t previously know how to elicit these tissue-resident memory cells with a safe protein vaccine, but we now have a strategy to stimulate them in the lungs that will protect against influenza,” explains Suresh. “As soon as a cell gets infected, these memory cells will kill the infected cells and the infection will be stopped in its tracks before it goes further.”

However, because strains must be predicted ahead of flu season in order to produce vaccines, the vaccine in any given year may not completely match the viral strains in circulation that season. Flu viruses frequently mutate and can differ across time and from region to region. In addition, protection is neither long-lasting nor universal.

“Even though current vaccines that people get annually stimulate antibody responses, these antibodies don’t cross-protect,” notes Suresh. “If there is a new flu strain not found in that year’s vaccine, the antibodies that we generated last year won’t be able to protect. That’s when pandemics happen because there is a completely new strain for which we have no antibodies. That is a really big problem in the field.”

The vaccine developed by Suresh and his team is directed against an internal protein of influenza — specifically, nucleoprotein. This protein is conserved between flu strains, meaning its genetic sequences are similar across different strains of flu.

The vaccine also utilizes a special combination of ingredients, or adjuvants, that enhance an immune response, which the researchers developed to stimulate protective T-cells in the lungs. These adjuvants spur T-cells to form into different subtypes — in the case of the experimental flu vaccine, memory helper T-cells and killer T-cells. By doing so, the vaccine leverages multiple modes of immunity.

Researchers demonstrated in a mouse model of influenza that the vaccine provides long-lasting immunity — at least 400 days after vaccination — against multiple flu strains. They will next test the vaccine in ferrets and nonhuman primates, two animal models of influenza research more biologically similar to human infection and transmission.

The vaccine’s combination of adjuvants makes it adaptable to other pathogens and “expands the toolbox” for vaccine research, notes Suresh. He and his team have devised ways to program immunity to target multiple respiratory viruses. They are currently testing the same vaccine strategy against tuberculosis, which infects more than 10 million people globally each year, and human respiratory syncytial virus, or RSV, a major cause of lower respiratory tract infections during infancy and childhood.

The researchers believe the same vaccine technology can applied against SARS-CoV-2, the coronavirus that causes COVID-19. “Based on the COVID-19 immunology, we know this vaccine strategy would most likely work,” says Suresh.

The team is now developing an experimental vaccine against COVID-19 and conducting laboratory tests to measure its effectiveness in mice and hamsters, animal models for COVID-19. Initial unpublished studies in mice show that the vaccine stimulates strong T-cell immunity against COVID-19 in the lungs.

Along with its adaptability, this vaccine approach may harbor important safety benefits. Typically, long-lasting T-cell immune responses are stimulated by live vaccines. For instance, the measles, mumps and chickenpox vaccines administered worldwide are live, replicating vaccines — essentially benign versions of the pathogenic organism. These live vaccines stimulate strong, almost lifelong immunity. However, they can’t typically be given to pregnant or immunocompromised individuals due to health risks.

In the case of the UW–Madison team’s vaccine, because it is a protein vaccine and not a live vaccine, it should be safe for delivery to those who are pregnant or immunocompromised — an advantage in delivering protection to a wider patient population. Suresh says that in recent years, vaccine development efforts have shifted away from live vaccines toward protein vaccines because an increasing number of people are living with compromised immune systems due to chemotherapy, radiation treatments or conditions such as HIV/AIDS.

THIS WORK WAS supported by THE NATIONAL INSTITUTES of HEALTH (GRANT UO1124299).