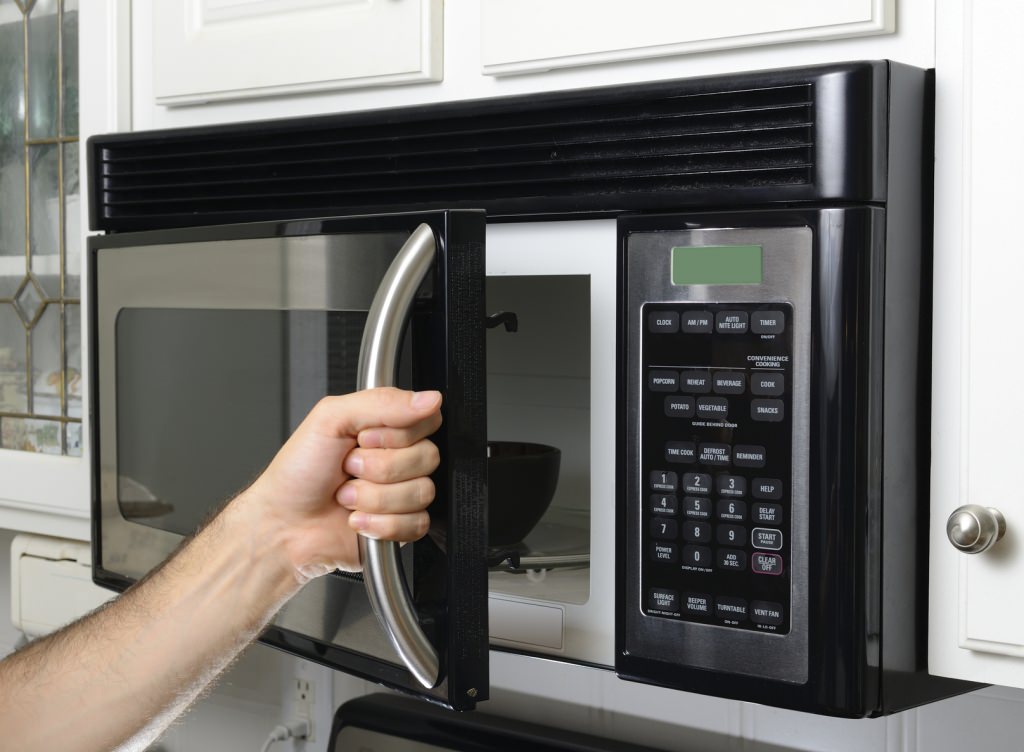 Modern tools like microwave ovens and X-ray machines that are powered by intense, focused beams of electrons are ubiquitous, but many of the materials in those devices have remained largely unchanged for decades.

Now, electrical and materials engineers at the University of Wisconsin–Madison have identified a substance that could vastly improve the technology.

This new material, a member of a broad class of compounds called perovskites, could boost the output power of the electron beam and enable long-range communications or remote sensing for a fraction of the current energy costs.

With a $1.3 million grant from the Defense Advanced Research Projects Agency, the researchers aim to synthesize large amounts of the material and further study its properties — as well as search for even more applications.

Devices that may benefit from UW–Madison’s perovskite work draw useful energy from streams of electrons flying through a vacuum, and therefore are called vacuum electronics. Vacuum electronic devices put electron energy to work for a broad array of functions, from accelerating particles in research reactors to detecting distant objects using radar to communicating with interstellar probes cruising past Pluto.

“Anytime you need to efficiently extract energy from an electron stream with a small, compact device, then a vacuum electronic device is your best bet,” says John Booske, a Vilas Distinguished Achievement Professor in electrical and computer engineering at UW–Madison and a principal investigator on the project.

The charged beams that drive these devices emanate from sources called cathodes. Most cathodes are made from metals that emit electrons from their surface when heated to high temperature. More emission means a stronger electron beam.

But most metals don’t spew significant amounts of electrons from their surfaces, even at 1,000 degrees Celsius. 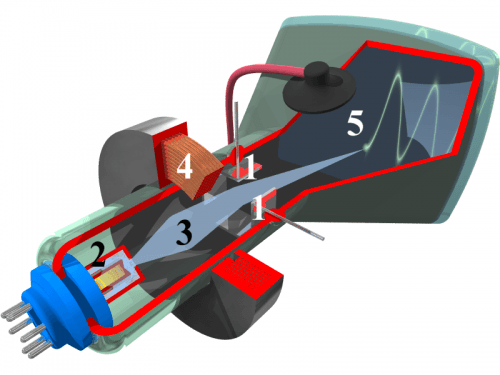 The interior of a cathode-ray tube for use in an oscilloscope: (1) deflection voltage electrode; (2) electron gun; (3) electron beam; (4) focusing coil; (5) phosphor-coated inner side of the screen. Illustration: commons.wikimedia.org

“The power per unit volume you need out of a satellite transmitter is huge,” says Booske. “However, the size and power budget are both limited because payload is very expensive in a rocket, and you can only harness a meager amount of energy from the sun.”

To get more electronic bang for the input power buck, Booske — in collaboration with Dane Morgan, the Harvey D. Spangler Professor in materials science and engineering at UW–Madison — set out to identify new materials that could act as electron sources.

Most vacuum electronic devices generate beams by heating up tungsten metal to high temperatures, the same way the filaments in incandescent light bulbs produce light. That familiar glow actually represents counterproductive energy loss for the purposes of an electron beam, so tungsten cathodes typically receive a thin coating of barium oxide, which encourages them to let electrons fly rather than simply light up. Because barium oxide is volatile, that coating boils off of the surface at high temperatures, degrading the cathode over time.

Some alternative cathode materials have emerged over recent decades, but none reliably outperform existing technologies. And the trial-and-error process of identifying and characterizing candidates from among the vast array of possible combinations between elements on the periodic table is akin to picking out a single needle from an enormous haystack.

Booske, Morgan and their student Ryan Jacobs, however, have found a needle.

“While we are excited about our initial success, the results of this first search are really just the tip of the iceberg.”

“With a well-proven computational technique, we’ve identified a material that, on paper, looks like the first promising prospect that could be better than the state-of-the-art cathodes,” says Booske.

“Allowing the computer to crunch through the material properties for all different sorts of compounds allowed us to screen and compare among the enormous range of possible perovskites,” says Booske.

“While we are excited about our initial success, the results of this first search are really just the tip of the iceberg,” says Morgan. “With the understanding we have gained, we can now integrate high-throughput computation and informatics techniques to screen intelligently through thousands of possible materials to find many new promising candidates. This type of computational materials design, driven by leading research universities like UW–Madison, is changing how we discover materials.”

The researchers are developing strategies to produce large amounts of the pure material and further characterize its properties. Jacobs, now a scientist in the Booske and Morgan labs, will lead the effort. The researchers are working with the Wisconsin Alumni Research Foundation to patent the material.