An internal combustion engine similar to the one in your car could play a key role in making electrical generation far more efficient.

The technology could also offer an economical way to support the addition of a growing number of renewable energy sources to the power grid. 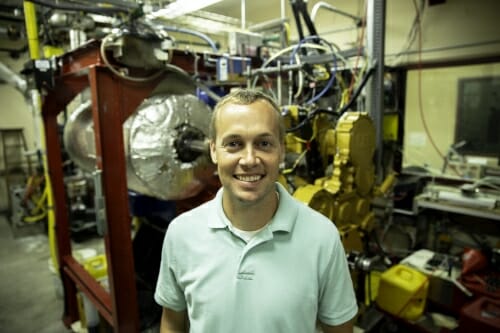 Most electricity fed into the power grid is generated by large power plants burning coal and natural gas. But these plants turn only about 36 percent of the energy released by their burning fuel into useful electricity. And by the time that electricity reaches customers, the amount drops to 34 percent due to losses over transmission lines.

Kokjohn is aiming to design a plant that can capture 70 percent of its fuel’s energy potential as electricity by integrating two technologies — an internal combustion engine and a solid oxide fuel cell — into a hybrid system that capitalizes on the unique characteristics of each. The Department of Energy is supporting the research with a $1.7 million grant from its Advanced Research Projects Agency-Energy (ARPA-E) program.

“There are certain characteristics of the way that fuel cells operate, such as the partially consumed fuel that exits the stack, that’s actually very beneficial for these advanced combustion engines,” Kokjohn says. “So by coupling these two devices, we can take advantage of some synergies between them and achieve very high efficiency. It’ll be very exciting to show a pathway to 70 percent electric efficiency.”

Fuel cells are devices that generate power through an electrochemical process instead of by combustion. Certain types of fuel cells can use natural gas as fuel and directly generate electricity with very high efficiency.

However, these fuel cells only consume about 75 percent of the fuel’s energy, and the remaining energy in the gases that leave the fuel cell is wasted. Kokjohn sees an opportunity to put that unused fuel to work to boost efficiency. And that’s where the engine steps in.

The ability to easily adjust to shifting power demands is especially desirable as more renewable, and highly variable, energy sources like wind and solar are added to the grid.

Kokjohn’s hybrid system will direct the exhaust from the fuel cell into an advanced compression ignition engine, allowing the engine to generate additional power by burning the fuel cell’s leftovers.

But because the fuel that comes out of the fuel cell is of very low quality, a conventional combustion engine isn’t able to effectively burn it, Kokjohn says. To overcome this challenge, his team is investigating several advanced combustion strategies for enabling the engine to use that low-quality fuel.

An engine provides the system with another unique advantage: the ability to easily adjust to shifting power demands. This capability is especially desirable as more renewable, and highly variable, energy sources like wind and solar are added to the grid, according to Kokjohn.

“The amount of solar energy that’s being added to the grid changes a lot based on the weather,” he says. “So you’d like to be able to shut down the nonrenewable energy source when the sun is really shining, and then come back up when the sun goes under a cloud.”

Kokjohn’s hybrid system will offer just this kind of responsive flexibility, complementing intermittent renewables like wind and solar by filling in gaps when the sun isn’t shining and the wind isn’t blowing.

“Our system would provide significant benefits not only from an energy perspective but also from an economic perspective,” says Kokjohn, noting that it’s very challenging and costly for large power plants to respond to changing power demands.

Additional benefits of the technology include a substantial reduction in greenhouse gas emissions.