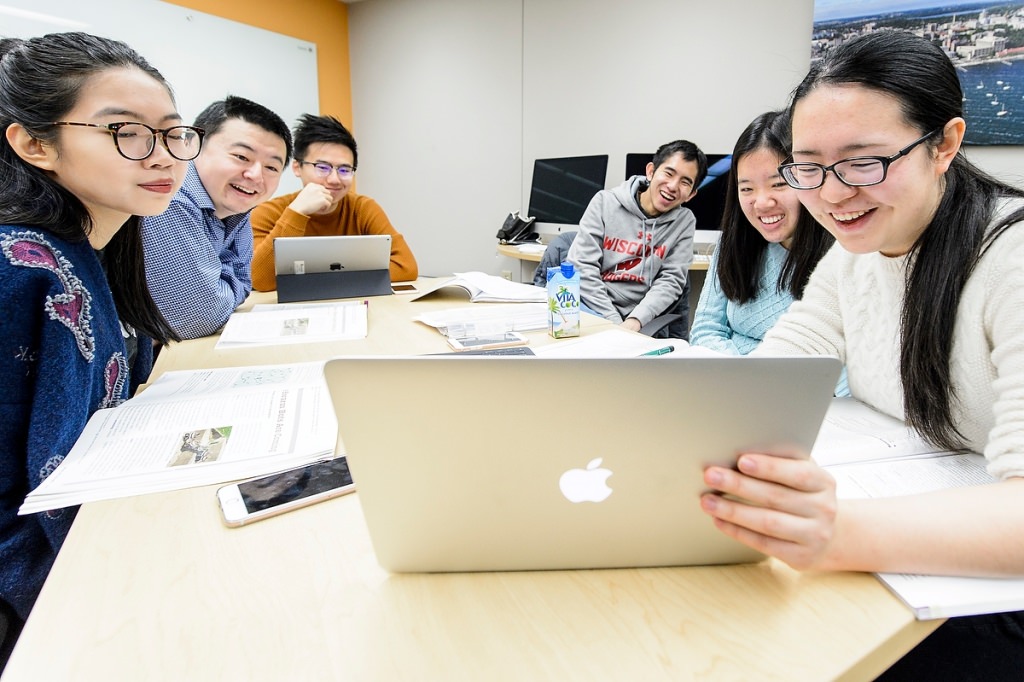 It might be hard to imagine a journalism student, a future economist, a cancer researcher and an aspiring statistician in the same 16-person class in Helen C. White Hall.

More than 1,000 undergraduate and graduate students at UW–Madison are united by a common thread: the need for English language skills.

“Here in the ESL program, we have a pretty happy staff because they feel the same way I do,” says English as a Second Language director Sandra Arfa. “That we are rather lucky to have such a diverse population of students to work with — and it’s fun.”

The ESL program — part of the English Department — recently celebrated the launch of a new interactive learning lab. Dan Pell, the designer of the learning lab, sought to create a dynamic space that provided flexibility for instructors based on different learning goals. 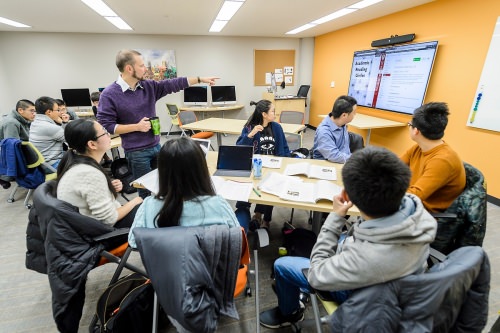 The new ESL active learning lab is configured for a number of teaching styles and equipped with a variety of technological learning tools. Photo: Bryce Richter

The room’s modern aesthetic includes chairs and tables with wheels, and the latest Apple computers and tablets that help students conquer their academic challenges.

“If I’m able to give them the language skills, I can enable them to go on and do what they’re really focused on. I really like knowing that I’m just a little part of that,” says Pell.

According to Arfa, enrollment in ESL courses has tripled in the past 15 years. She predicts demand for the program will continue to grow. This new lab is the first time the ESL program has had a single place to call home without having to migrate among different campus buildings.

Pell reached a moment in his career when he had to choose between teaching literature or ESL.

One former ESL student, Hyungjin Gill, is a Ph.D. student in the UW–Madison School of Journalism and Mass Communication studying political communication.

“I’ve benefited greatly from my ESL118 teacher, Steve Timm. It was in his class where I became motivated to pursue a research career or any professions that involve writing,” says Gill. “Steve indeed is a special instructor who genuinely cares about his students. I still refer to him as my ‘trainer’ since he taught me some of the most important lessons about writing.”

ESL faculty also cited the small class sizes as an opportunity to develop relationships with their students.

“I think there’s not a whole lot of general socializing between domestic students and international.” says Arfa. “They can be lost here. ESL teachers are approachable for the most part and want to help.”

“They’re not all rich, they’re not all brilliant — they’re smart or they wouldn’t be here — they’re just perfectly ordinary people with all of their individual personalities,” says Arfa.