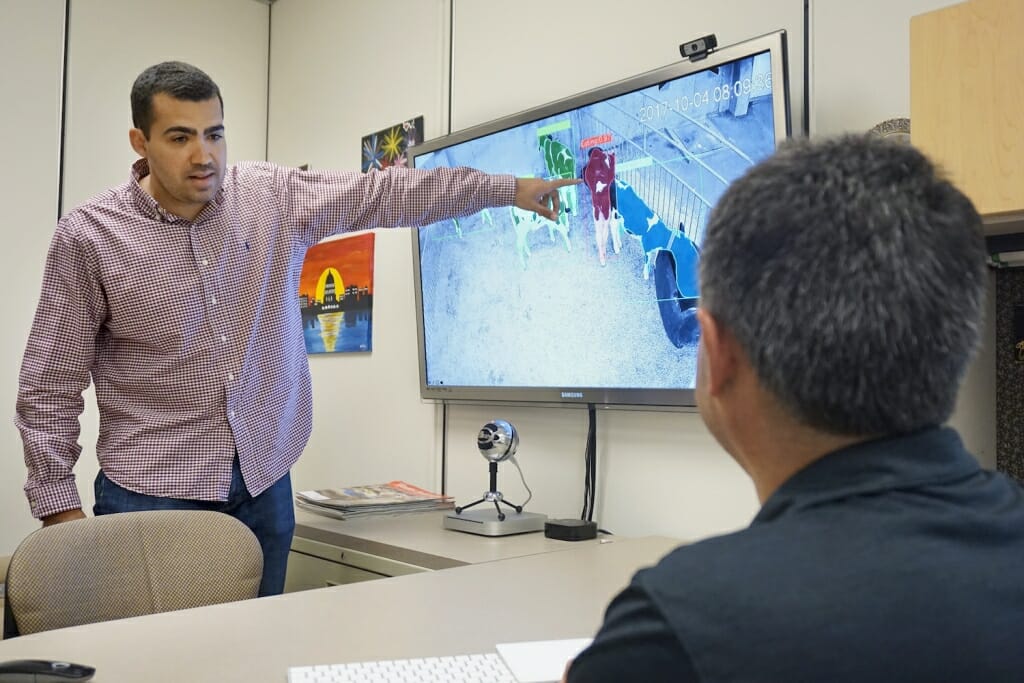 The same technology that alerts a self-driving car that there’s a pedestrian in the crosswalk could also warn a dairy farmer that a calf is getting sick—even if that calf is mingled among dozens of healthy ones.

Research by Joao Dorea, a new assistant professor in the University of Wisconsin–Madison dairy science department, is laying the groundwork for this and other technologies that gather and analyze data and pinpoint patterns that can help farmers make better decisions.

“We have a camera, fully automated that recognizes what activity the calf is performing—standing, eating, drinking milk, drinking water, lying down,” Dorea says.  “By the end of the day we should be able to say ‘Look I have a calf here that’s lying around 30 percent more than normal.’

“Animals change behavior when they’re sick,” he says. “There’s an increase in lying-down time, a reduced number of steps. We need to be able to pick up these little differences. It’s hard to spot in a large operation. By the time the farmer notices, it might be too late.”

In his new position, Dorea’s research and teaching will focus on dairy-related applications of precision agriculture and data analysis. The job officially begins in July, but Dorea has been working on campus for three years and is well along on several lines of research. In addition to monitoring calf behavior, he and his research partners are using cameras to track calves’ growth, with the goal of seeing how calf growth patterns correlate with the animal’s future milk yield and composition and ability to successfully reproduce.

He’s also part of another research team that’s working on a way to analyze the spectrum of light reflected by the cow’s milk to estimate how much feed she has consumed. Having such data on individual animals could help farmers identify which cows are most efficient at converting feed to milk.

“With all the new technologies available there’s a huge push for data scientists, and dairy science is no exception,” says Cabrera, who chaired the hiring committee for Dorea’s position. “Applying these technologies requires two kinds of expertise. You need to understand the sensory technology that collects data, such as imaging, analyzing milk or monitoring the cow’s activity. But this data doesn’t have value until you analyze it. We also wanted someone with expertise in that.

Dorea’s background is in dairying and animal science. His family operated a 250-cow grazing operation in Brazil, which inspired him to earn a B.S. in agronomy and graduate degrees in ruminant nutrition. He then spent two years managing dairy and beef research in Latin America for DSM, a global supplier of animal health and nutrition products.

He developed his expertise in data analytics and sensory technologies when he came to the UW–Madison in 2016. He first worked with dairy nutritionists Lou Armentano and Dave Combs and later joined the lab of animal scientist Guilherme Rosa, who specializes in agricultural applications of data analytics and artificial intelligence.

His deep dive into the science of collecting and wrangling data hasn’t dampened his interest in animal science in the least, he says.

“I’m interested in the same biological questions that I had before,” he says. “Now, with the amount of data that is being generated, I’m able to apply more analytics and quantitative analysis to better answer these questions.”