Need a New Year’s resolution? Read a book a day. This undergrad did. 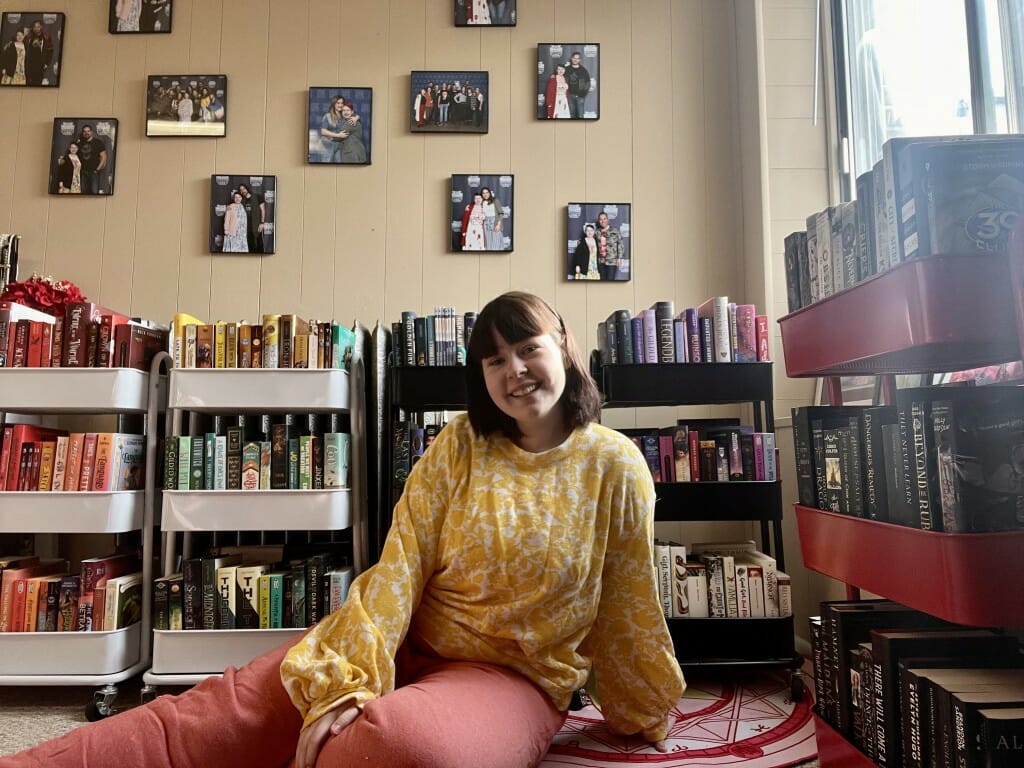 “Some days I don’t read at all, other days I’ll finish three books,” says UW–Madison senior Kyla Vaughan, who read 392 books in 2021. She’s pictured in her apartment with a few of those books. Submitted photo

For calendar year 2021, Kyla Vaughan set a seemingly impossible goal for herself: read 365 books — one per day.

“I guess I did it partly for the bragging rights, but also because I believe that reading about other people is the best way to gain empathy,” says Vaughan, a UW–Madison senior from southwestern Wisconsin. “It was a joy to live the lives of so many characters this past year.”

Vaughan, a double-major in English and history, attributes her accomplishment to being a naturally fast reader and making reading a priority. She once timed herself and found she could cover 50 pages in about 15 minutes, though she doesn’t consider herself a speed reader. (She doesn’t skim.)

To make time for reading, she put television, movies, and social media on the backburner. “When people asked me if I saw the latest movie, the answer was always no.”

Vaughan, the student speaker at convocation last fall, says she was aided in her goal in a couple of important ways.

She works two customer-service desk jobs on campus. Both allow employees to read or do homework during downtime, Vaughan says. Her text-heavy majors also helped. She read 30 of the books for classes, although that still left more than 360 other books.

Most of those other books came from her favorite genres of fantasy, romance, and science fiction. We know this because of the meticulous spreadsheet Vaughan kept during her Year of Reading Wildly. A few highlights:

Those who know Vaughan best say they are not surprised by her accomplishment.

“I actually think she could double or triple that number — that’s how fast she reads,” says best friend Madison Hummel, a 2021 UW–Madison graduate.

The two met in a Shakespeare course. “She sat near the front and was the loudest and most excited student in the class,” Hummel says. “I knew I wanted to get to know her.”

Vaughan’s father remembers his daughter setting a class record in first grade for reading the most books in one year — more than 1,000.

Kyla Vaughan estimates that she reads, on average, two to three hours a day. But she’s not a reading snob.

“I hate it when people say that reading is a better hobby than watching TV. That’s so pretentious,” she says. “A lot of what I’m reading isn’t academic. It’s still a hobby. I still procrastinate to get out of doing actual work by reading a book.”

Should others try to join her in this exclusive club?

“If I’m being completely honest, I wouldn’t advise it,” Vaughan says. “There were times I felt pressure to read, and I didn’t love that. I would instead challenge people to read a book a month and see what comes of that. You’re never going to get true joy from reading until you make it a habit.”

“I want to read less,” she says. “I want to focus more on quality and less on quantity.”

Also, she expects to be busy launching a career. After graduating this spring, she will start a full-time job as a project manager at healthcare software company Epic Systems, based in Verona, Wisconsin. As part of the interview process, she was asked to give a 10-minute presentation on a theme of her choice.

Her topic: The structure and tropes of romance novels.