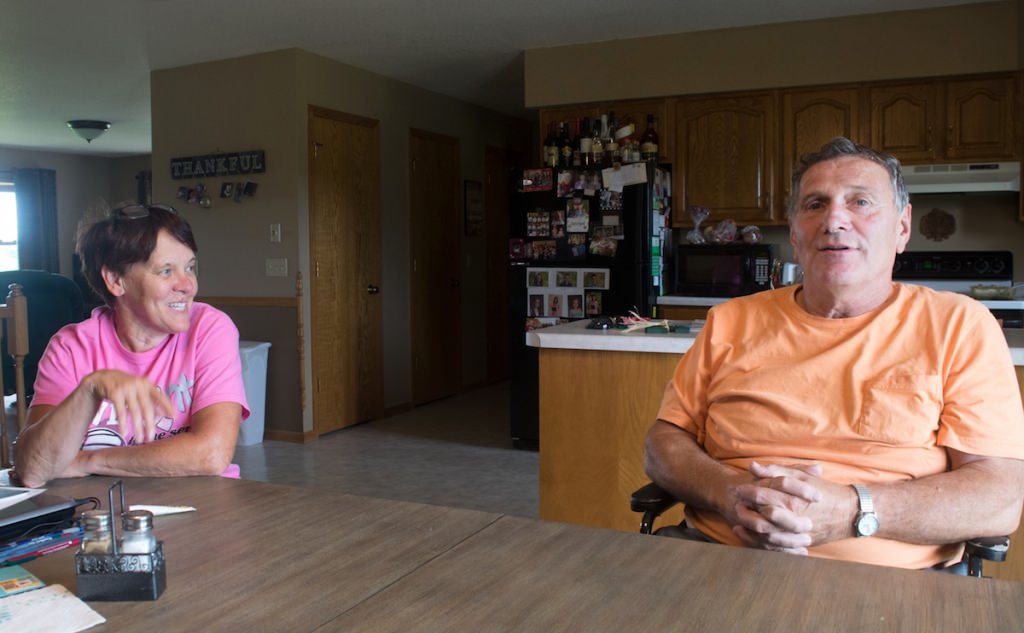 Gary Gruenenfelder and his wife Muriel, nicknamed Murt, grew up just miles apart west of Hollandale; they met when the Pecatonica School District emerged from the merger of the Hollandale and Blanchardville schools. David Tenenbaum

The sliding doors on the house outside Blanchardville, Wisconsin, show a wall of corn, prospering in the mid-July sunlight. But the view is getting old to one born-and-bred farmer. “I’d go crazy if I had to sit and look at that corn all day,” says Gary Gruenenfelder from his wheelchair.

That might seem ironic, considering that he grew up on a farm just five miles west of here, and has been farming in one way or another nearly all his life. But Gruenenfelder’s life changed forever on Nov. 20, 2010, when he collapsed to the floor with a brain bleed.

The aneurysm was a grade 5 stroke, meaning it would kill more than 90 percent of its victims.

Gruenenfelder‘s odyssey entailed months in surgery and an induced coma at UW Hospital, followed by almost a year at a rehab center and a nursing home. 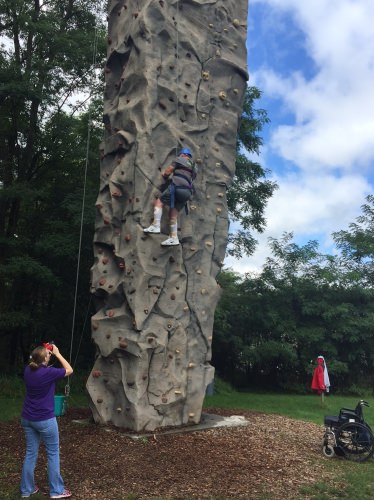 Gruenenfelder at stroke camp last year: “We did rock climbing and zip lining, things you really don’t believe you can do when you are sitting in a wheelchair. Instead of sitting back and thinking about it, you did it.” UW Health

Gruenenfelder is now home, driving a van with hand controls, getting around with a walker or a wheelchair, and looking forward to his second visit to the Wisconsin Refresh and Retreat Stroke Camp. The camp is part of a national network of weekends – think summer camp – for people recovering from strokes and those who for care for them.

The event, sponsored by UW Health and staffed by volunteers from School of Medicine and Public Health and other UW–Madison units, will be held Sept. 15-17 in Green Lake, Wisconsin.

The change in life experienced by caregivers is just as sudden as that undergone by the stroke patients themselves, and caregivers are a major focus at camp. “As we told our stories, a lot of tears were shed, and a lot of laughs,” says Murt Gruenenfelder. “You found out a lot of other people were going through the same thing. You keep going, keep moving; you don’t stop just because there was a stroke in the family. We got together at night and played games, sat around the campfire, it was really enjoyable.” 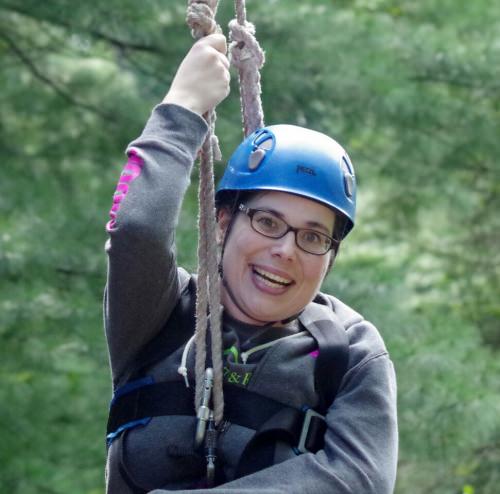 Josie Rupnick, of Franklin, Wisconsin, in a climbing harness at stroke camp in 2016. Lauren Kramer

“It’s a vacation,” says Chris Whelley, a UW Health stroke nurse who coordinates the camp for the department. “A lot of people who come say they never realized they could take a vacation. Caring for a stroke patient at home can seem overwhelming, so the caregivers are pampered, and they meet others who are going through the same thing. They are working hard to keep a positive face and support the loved one, and at camp, they can share the ups and downs of recovery. It’s amazing how important small things can be during recovery. You can say something about that to your neighbor, but they won’t understand like people who have lived it.”

Stroke patients also benefit from the “summer camp” theme, says Robert Dempsey, chair of neurosurgery and another volunteer at the camp. “For the stroke victim, that may be their first relaxation since the stroke. They can fish off a platform; we have a pontoon boat that can hold wheelchairs, crafts, games, singalongs; it makes you feel alive again.”

Dempsey, like many other volunteers, comes from the medical realm. “For us, you cannot do this without understanding how difficult a problem this is,” he says. “It’s different when you are a doctor in a hospital. At camp, we do the day-to-day care, we help feed and lift. I come back knowing that we must do a better job on stroke prevention. My research gets better, our care gets better, and it’s important for our empathy.” 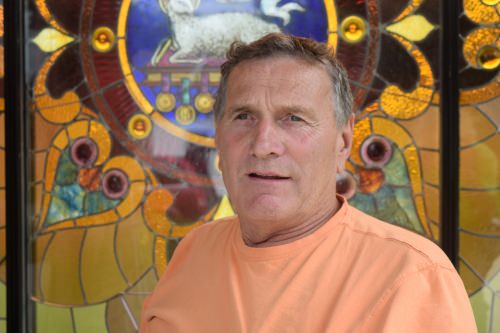 If Gruenenfelder finds his situation distressing, he does a good job of hiding it. Instead, he is a count-your-blessings type who has benefited from multiple people and programs at UW–Madison, and by the tight-knit community he and his wife were born into.

He had, for example, been on the volunteer fire department in Blanchardville. After the stroke, “They left my spot open, said, ‘When you get better, you’ll be back.’” Until then, Gruenenfelder accepted an invitation to become secretary and treasurer for the department, and for the EMS service.

Things were looking a lot less positive on Nov. 20, 2010, when Gruenenfelder collapsed at home and was med-flighted to University Hospital in Madison. Although he remembers none of it, brain surgeon Mustafa Baskaya temporarily removed a piece of skull to alleviate potentially fatal pressure buildup.

Gruenenfelder then spent weeks in an induced coma and almost a year at Uplands Hills Rehab and Nursing Center in Dodgeville. As his recovery progressed, Gruenenfelder, who is now 63, relearned the use of his hands, building fine-motor dexterity, for example, with the help of the card game euchre.

As part of his continuing relationship to UW–Madison Health, he was treated for a second aneurysm – fortunately caught and treated in time by neurosurgeon Bev Aagaard-Kienitz.

In his recovery, Gruenenfelder had an ace up his sleeve. “He’s always been positive, and he was too stubborn to die,” says Murt. “He likes a challenge all the time.”

Gruenenfelder, who had been a farmer and a carpentry contractor, says he “felt pretty worthless” after the stroke. When his son Farron asked if he would drive the tractor to bale hay, “I told Murt, ‘I’m going out.’ She said, ‘I am going to ride with you and see how it goes.’ She rode for 20 minutes and realized I could start and stop I when needed.”

The Gruenenfelders have five other children: Justin, who works at MG&E and has a beef herd, Jason, who also farms, Lucas, who works at an underground utility contractor. Heidi sells for a medical-equipment supplier in Pewaukee. Lacy, the youngest, works in information technology for the New Glarus school district. 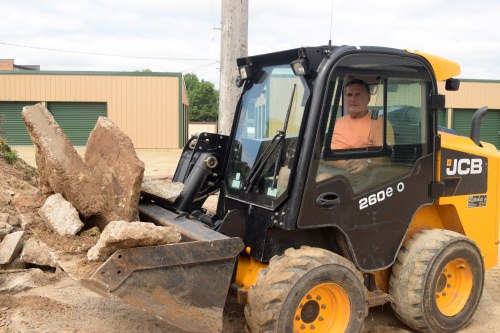 Not one to sit idly by, Gruenenfelder moves concrete at a site in Blanchardville. David Tenenbaum