‘Science in Motion’ takes chemistry on the road across Wisconsin 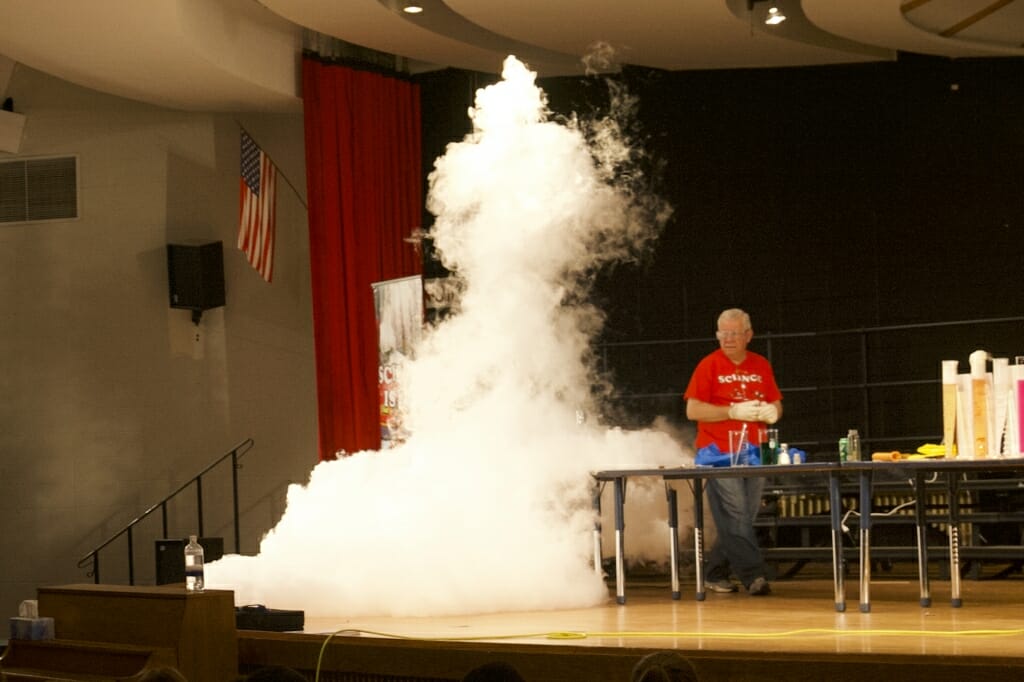 A bucket of dry ice dumped into a pan of boiling water creates a plume of fog, one of the more dramatic demonstrations in Bassam Shakhashiri’s chemistry show. Photo: Wesley Marner/Morgridge Institute for Research

Outside, the cool spring rain settled mist deep into the hills of Wisconsin’s Driftless Area and raised fog out of lakes and ponds. And when that fog was seemingly transported inside — with the help of a bucket of dry ice and a generous amount of boiling water — it drew cheers and gasps of excitement from the crowd as the white haze crashed over the stage inside the Kickapoo Elementary and High School auditorium in Viola.

For third grader Kinzie Cade, it was just what she’d hoped for.

“Because it was the biggest thing that exploded,” she says. 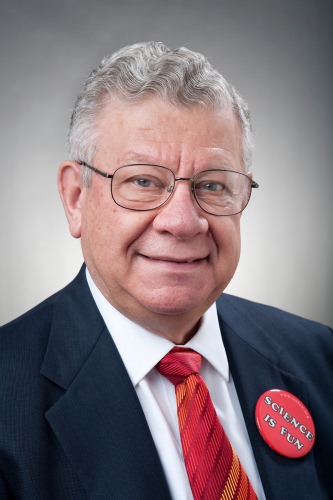 The dry-ice fog was just one of a dozen choreographed science demonstrations by University of Wisconsin–Madison Professor of Chemistry Bassam Shakhashiri. Disappearing packing peanuts, floating mugs, color-changing solutions and skewered balloons captivated the room full of elementary students and their teachers in the style of a magic show. But unlike magicians, Shakhashiri and his performers pulled the curtain back to explain the science behind their experiments.

Shakhashiri has taken his popular series of chemistry demonstrations on the road. With his van, emblazoned with “Science is Fun” in his program’s characteristic rainbow colors, Shakhashiri is determined to spread the joy of learning as far across Wisconsin as possible.

“I want to live the Wisconsin Idea in the 21st century,” he says.

Shakhashiri started Science is Fun decades ago to “foster community appreciation of science.” He has long extended the reach of his program outside of Madison, including to Europe, the Middle East, Brazil, Australia, China, Singapore, Korea and Canada. But the van, which he acquired in 2017, helps transport his program’s materials safely around the state. “Science in Motion,” as the road expeditions are called, has been to a number of Wisconsin communities including Kiel, Mauston and Fredonia, and plans to visit Alma and Sturgeon Bay. 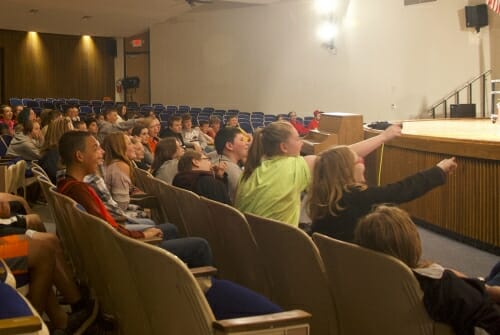 At the Kickapoo demonstrations, Cade and her friends were eager to see smoke and explosions, but also to discover “how things work.” No strangers to science, they were fans of “Bill Nye Saves the World,” the educator’s show on Netflix. Still, Shakhashiri’s program was a welcome break from the Friday routine.

Haley Olsen was one of the performers for the presentation, which took place just a day before she graduated from UW–Madison with a degree in chemical engineering. She took Shakhashiri’s course on public chemical demonstrations before joining his shows in Madison and on the road.

“I did a few programs like Bassam’s in elementary school and middle school and that’s kind of what prompted me to take the class, seeing some of these shows when I was younger,” says Olsen.

“This is why we do science. Because you and I are curious. We have questions.”

Olsen grew up in Plymouth, Wisconsin, where she attended a high school about the same size as Kickapoo, which enrolls around 270 students in sixth through 12th grades. She was set to begin work in research and development at the worldwide packaging supplier Bemis in Neenah after graduation.

Along with Kyle Acevedo, who graduated from UW–Madison in 2017, Olsen was invited up by Shakhashiri to command one portion of the event. Among other experiments, the duo collapsed an improbable number of packing peanuts in acetone, revealing how much air — and how little foam — really made up the material. Cries of “That’s crazy!” rang out from the audience as the peanuts rapidly disappeared. 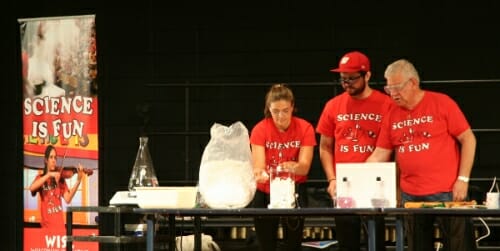 “A lot of (the presentation) has changed over the years, to try to relate it to societal issues,” says outreach specialist Gery Essenmacher, another of the day’s performers. “For instance, we use dry ice. Dry ice is carbon dioxide. We’ll use that to introduce greenhouse gases, talk about greenhouse gases, what they might be.”

When Shakhashiri took the stage again, he swirled a number of chemicals together in a large flask to create a chameleon-like solution that alternated between yellow, blue and colorless. With practiced timing, Shakhashiri walked away while the students desperately entreated him to look at the shifting colors. But he turned around only to find that the solution was once again as plain as water. Continued rounds of faux obliviousness heightened the audience’s anticipation and drove home Shakhashiri’s lessons about careful observation and curiosity being the bedrock of science.

After the performance, the third graders were set on returning home and, as Shakhashiri had encouraged them to do, performing their own versions of the experiments. Inflated balloons threaded intact onto skewers were the first on their list.

“This is why we do science,” Shakhashiri tells the students as he wraps up the first presentation before welcoming in a new crowd, this time middle schoolers. “Because you and I are curious. We have questions.”