After a 29-year quest, Ian Duncan, a professor of veterinary medicine at the University of Wisconsin–Madison, has finally pinpointed the cause of a serious neurologic disease in a colony of rats.

His new study, now online in the journal Annals of Neurology, is more than the conclusion of a personal and intellectual odyssey, however. Duncan has just shown that the rat abnormality closely resembles a rare human mutation that results in severe neurologic dysfunction. The human disease can affect many parts of the brain and has been called H-ABC.

Indeed, both conditions arise from mutations in the same gene. 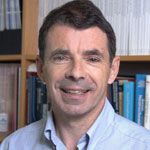 Crucially, both abnormalities affect the production and maintenance of myelin — the white, fatty insulation that nerves need to carry electrical signals. The deterioration of myelin in the brain causes the common neurologic disorder multiple sclerosis. Myelin defects are also at the root of the leukodystrophies — genetic disorders that include H-ABC.

Duncan’s examination of nervous system tissue from both conditions revealed a telltale overgrowth of tiny tubes known as microtubules in oligodendrocytes, the cells that make myelin and deposit it on nerve fibers.

The Annals study offers a window on a rare disease — and also on the broader issue of myelin formation. “For a human disease, we have provided a model that did not exist before,” Duncan says, “and we’ve shown that it’s based on microtubule accumulation in oligodendrocytes. Now we’ve seen similar changes in the rats and the human cells.”

The roots of the new publication include a chance observation by two Chilean scientists, a couple of eyebrow-raising trips across the U.S. border, and the drive and persistence that have fashioned Duncan into a long-distance skier and competitive triathlete. 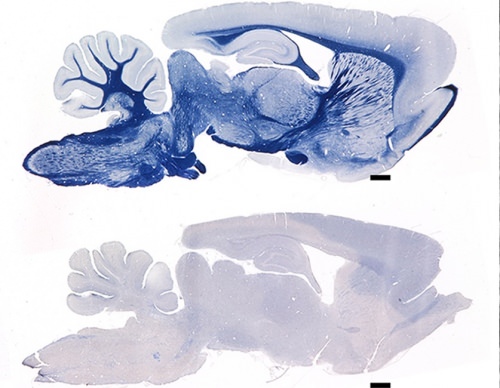 A normal 9-month-old rat has myelin (blue) throughout the brain but the age-matched mutant rat (below) appears to have none. (Scale bar is 1 mm; front of brain is at right.) Duncan Lab, UW–Madison, with permission from Annals of Neurology

In 1988, Duncan learned that Bjorn and Ruth Holmgren, who had fled the Pinochet regime in Chile and settled in Mexico, had isolated rats with “an interesting tremor” at their laboratory in Puebla. Through a chain of colleagues, they identified Duncan for his interest in disorders of myelin, and offered him some nervous system tissue.

The handoff went down at a neuroscience meeting in Toronto, Duncan says. “I was standing by my poster when I detected the strong smell of fixative (chemicals used to preserve biological samples). A leaking bag containing rat brain and spinal cord samples was given to me by a Mexican scientist. While returning to Madison, the U.S. customs agent wanted to know what I was carrying. I said, ‘It’s fixed brain tissue, it’s non-infective,’ and he let me through.”

Later, when Duncan decided to breed the rats in Madison, he visited Puebla. On his return, “I was waved through the O’Hare airport customs with a cageful of rats — and no questions asked. That was before 9/11.”

As Duncan’s lab studied the rats, they observed the rampant growth of microtubules, and identified the general location of the gene responsible. But they could not identify it precisely.

Microtubules are structures in a cell’s internal skeleton that supply both mechanical stiffness and a “railroad track” to transport molecules within the cell. The system goes haywire when the cell gets clogged with microtubules that block normal transport, Duncan says. “Microtubules accumulate with time, and they are everywhere in the cell and along all the processes that grow out from it. This affects the transport of myelin basic protein, which is a major constituent of myelin.”

On a separate track, Marjo van der Knaap, a world-renowned pediatric neurologist at VU University Medical Center in Amsterdam, was studying a new syndrome in children, and named it H-ABC for its effect on myelin and certain nerve cells. In 2012 and 2013, van der Knaap and others identified a mutation in the TUBB4A gene, which makes a protein for microtubules. 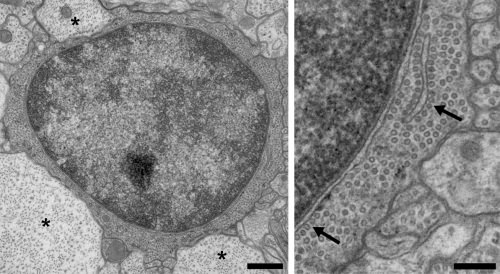 In the mutant spinal cord, the oligodendrocyte, a cell that makes myelin, is surrounded by conductive fibers (called axons, marked with *) that lack myelin sheaths. On higher magnification, this cell has a huge increase in microtubules (arrows) that fill the cytoplasm and line up with cell membranes. Image courtesy Benjamin August

In early 2016, Duncan learned about van der Knaap’s work from John Svaren, a fellow professor of veterinary medicine at UW–Madison and director of the Waisman Center Cellular and Molecular Neuroscience Core. “I read the study and thought, ‘This has to be what the rat has,’” Duncan says. “Originally, we thought this was a rat disease with no apparent human counterpart.”

Svaren also searched databases on rat genes and noted that the Tubb4A gene was exactly where Duncan and his colleague Fang-Yuan Li had previously predicted. Shortly thereafter they identified a mutation in the rat Tubb4A gene.

Finally, in May 2016, Duncan and van der Knaap went over their findings. “She had postmortem tissue from a patient who had succumbed to the disease, and under the electron microscope, I saw the same microtubule abnormality in human oligodendrocytes as we described in the rats. That was critical.”

The new rat model could become a testing ground for medicines that inhibit microtubule formation, Duncan says. It could also support insights into the larger group of leukodystrophies, genetic disorders with a wide range of causes and symptoms.

And, Duncan says, an improved understanding of how oligodendrocytes form and maintain myelin, and how those essential processes go awry, “could open a new window of understanding on the more widespread myelin diseases.”