Heart attacks can cause immediate death. But in survivors, the blockage of blood flow can kill so many heart muscle cells that heart failure can follow months or years afterwards. Heart disease is the leading cause of hospital admission and death in the United States.

“A heart attack causes a loss of muscle and leaves the heart with a scar that does not contract and so impairs the heart’s pumping function,” says Tim Kamp, a professor of medicine who is co-leader of a new grant designed to attack two roadblocks that have stymied efforts to restore heart muscle with muscle cells grown from stem cells.

Kamp, who directs the Stem Cell and Regenerative Medicine Center at the University of Wisconsin–Madison, says, “Everybody involved in treating these patients knows that this scarring often leads to a continual decline in heart function with heart failure and even death.” 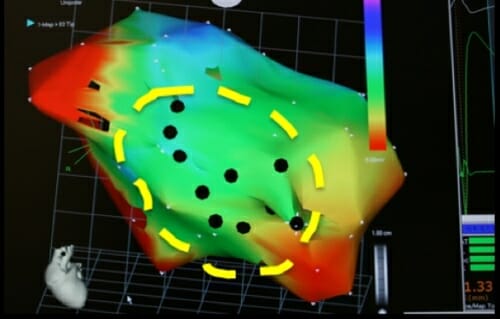 The UW–Madison researchers used approved surgical devices to locate the damaged heart muscle, and then injected the supportive matrix and committed cardiac muscle cells. The circle outlines target zone established before surgery; black dots show the sites that were injected in this mouse study. Amish Raval, work performed at UW–Madison in collaboration with Biologics Delivery Systems.

Sixteen percent of men, and 22 percent of women, develop heart failure after myocardial infarction – heart attack. Coronary artery disease – the category that includes stoppage of blood flow — causes one in seven deaths in the United States.

Adult stem cell injections seemed a logical way to form new heart muscle cells and repair the damaged muscle. But in dozens of experiments, the cells either washed out of the heart or failed to develop into the specialized muscle cells – the cardiomyocytes — that power cardiac contractions. “The benefits were mixed, modest at best,” says Kamp.

After years of preliminary investigations, however, Kamp and Amish Raval, a professor of cardiology, researcher and entrepreneur, hope that a combination of two cutting-edge approaches would use a fabric-like material to prevent “wash-out” and successfully implant cardiomyocytes to damaged hearts.

Aided by a Regenerative Medicine Innovation Project grant from the National Heart, Lung, and Blood Institute, part of the National Institutes of Health, the two will lead a group to test that idea in pigs over two years.

Having committed cells could be a major advance, Raval says. “The first stem-cells therapies started with cells that I call ‘the model T.’ Now, we are moving to the Buick.” The cells originate as induced pluripotent stem cells (iPSCs) – a relative of embryonic stem cells that is based on reprogramming adult cells.

Two Madison-based businesses, and sources at the University of Wisconsin–Madison, also helped to fund the research. Fujifilm Cellular Dynamics Inc., one of the largest commercial sources of stem cell products, produces the committed cardiac progenitor cells that will be tested. These committed cells are ready to transform themselves into cardiomyocytes.

Fujifilm bought CDI, a company whose founders included Kamp and UW–Madison stem cell pioneer James Thomson, but the operations remain in Madison. Kamp has no ownership position but is a consultant for the company.

Raval is a founder and board chair of the second commercial supporter, Cellular Logistics, Inc., which makes a freeze-dried matrix from the same proteins that naturally holds cardiomyocytes in place in the heart. The material is called extracellular matrix (ECM) because it scaffolds cells from the outside. 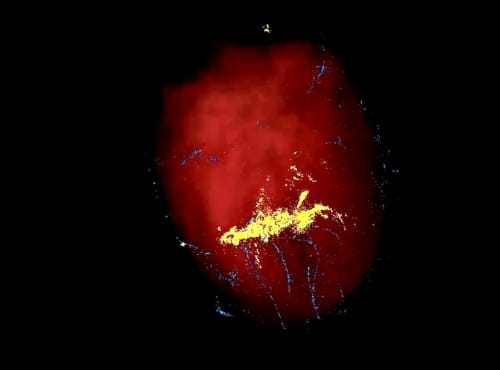 The injected scaffold may have another advantage for regenerating muscle after heart attack, Kamp notes.  “The ECM replenishes the scarred area to become more hospitable to the replacement cardiomyocytes.” The effect may be based on chemical and mechanical signaling between the ECM and the regenerating cells.

Pig’s hearts are quite close to human hearts in size and structure. The grant will cover tests on four groups of 12 pigs each following myocardial infarction:

If the combination is effective, Raval adds, “We plan to proceed toward a Food and Drug Administration application for an investigational new drug, which would allow us to begin human trials.”

With the passion and concern of a working cardiac surgeon, Raval says those trials would focus “on patients who have not been helped by the best medical management we know today and they are not candidates for heart transplant or mechanical assist devices. The only other option is palliative or hospice care.”

As Raval notes, “More people are surviving heart attacks, and that’s great. But many are left with a scar in the heart muscle – a dead zone. That scar can enlarge, and the damage can spread. So we are seeing an increasing number of patients with heart failure.  That’s why we are moving forward with this project.”