Schematic illustration of an integrated solar flow battery. A solar cell is hooked up to tanks of chemicals that can store electricity for later use. Wenjie Li

Chemists at the University of Wisconsin–Madison and their collaborators have created a highly efficient and long-lasting solar flow battery, a way to generate, store and redeliver renewable electricity from the sun in one device.

The new device is made of silicon solar cells combined with advanced solar materials integrated with optimally designed chemical components. The solar flow battery, made by the Song Jin lab in the UW–Madison chemistry department, achieved a new record efficiency of 20 percent. That bests most commercially available silicon solar cells used today and is 40 percent more efficient than the previous record holder for solar flow batteries, also developed by the Jin lab. 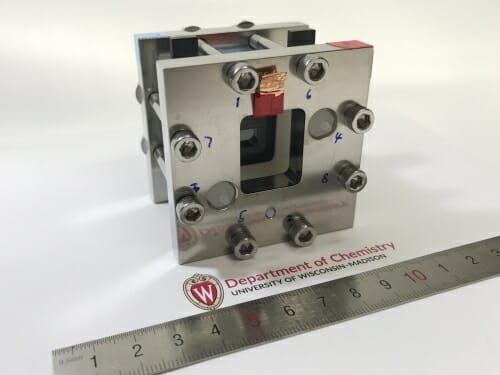 The integrated solar flow battery contains both a solar cell and chemicals to generate, store and redeliver renewable electricity from the sun in one device. Wenjie Li

While solar flow batteries are years away from commercialization, they offer the potential to provide reliable electricity generation and storage for lighting, cell phones or other fundamental uses for homes in remote areas. They combine the advantages of photovoltaic cells that convert sunlight into electricity with the advantages of flow batteries, which use tanks of chemicals that can react to produce electricity and be recharged by the solar cells.

Since the sun doesn’t always shine, storage is key for practical solar electricity, especially in remote and rural regions with a lot of sunlight, such as in the sunbelt regions of the U.S., Australia, Saudi Arabia and Africa. Many solar home systems use lead-acid or lithium-ion batteries for electricity storage. Flow batteries, which use large tanks of liquid chemicals to store energy, could be less expensive at a larger scale and are an ideal storage choice for merging with solar cells.

While solar flow batteries are years away from commercialization, they offer the potential to provide reliable electricity generation and storage for lighting, cell phones or other fundamental uses for homes in remote areas.

The Jin lab has spent years studying and improving integrated solar flow battery systems. In 2018, it developed a solar flow battery using a triple layer of efficient but expensive solar materials that achieved an overall efficiency of 14 percent. However, corrosion greatly reduced the device’s lifetime.

In their latest report, the researchers turned to an increasingly popular material for photovoltaic cells, halide perovskites. The solar conversion efficiency of these special materials has dramatically increased from a few percent to over 25 percent in 10 years. Recent research has shown that halide perovskites can also increase the efficiency of traditional silicon solar cells by capturing more energy from the sun. 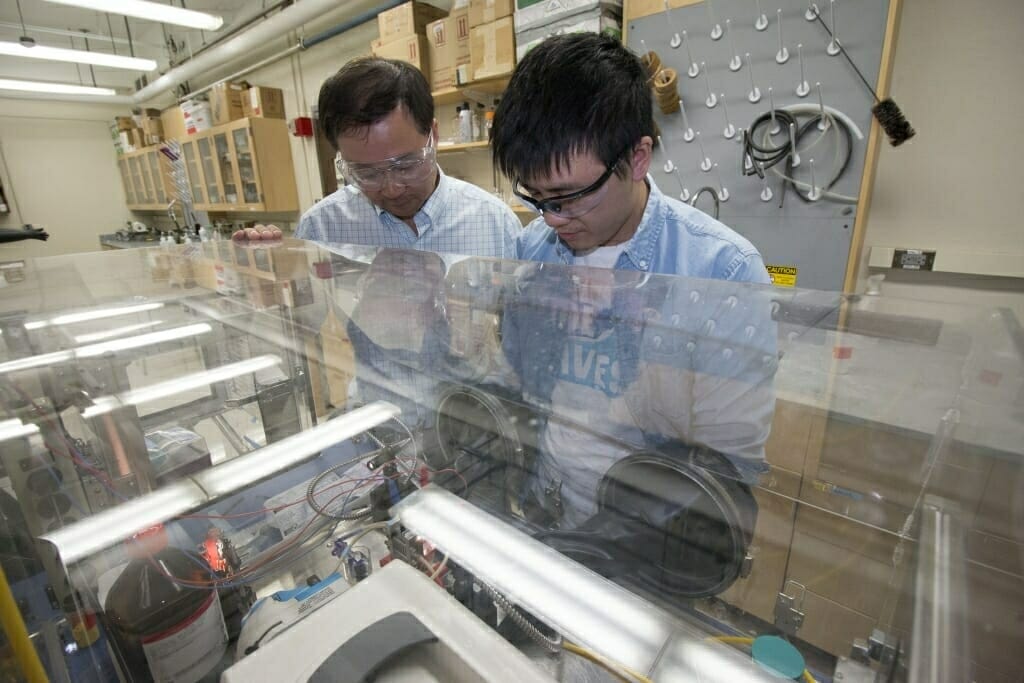 This new breed of highly efficient perovskite-silicon solar cells is on its way to commercialization. Yet silicon remains key for making a stable device that can withstand the chemicals in a flow battery.

“Our motivation for the design of the solar cell was to combine these two materials together so we have both high efficiency and good stability,” says Li.

Professor Anita Ho-Baillie and postdoctoral researcher Jianghui Zheng in Australia fabricated the perovskite-silicon solar cells with an additional protection layer on the silicon surface. They shipped the solar cells to Wisconsin for testing. 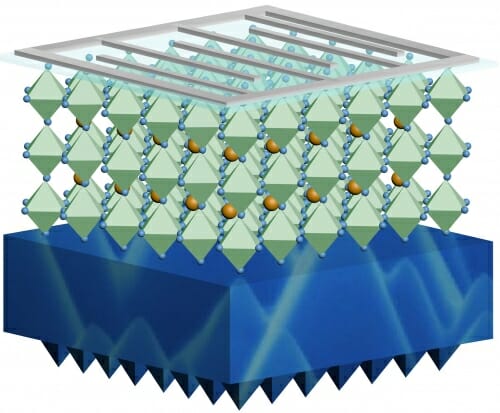 To predict the ideal voltage that the flow batteries should run at, Li developed a new theoretical modeling method. The modeling allowed him to select a pair of chemicals in the flow battery that would operate at the ideal voltage based on the characteristics of the solar cell, maximizing efficiency. The chemicals are organic compounds, not expensive metals as in traditional flow batteries, and are dissolved in a benign water solution of table salt rather than strong acids.

Utah State University chemistry professor T. Leo Liu and his graduate students provided the key matching chemicals. Thanks to a good match between the solar cell and the flow battery, the winning device maintained a high efficiency over hundreds of hours and hundreds of charge-discharge cycles while retaining most of its capacity. That lifespan was several times longer than earlier devices. Overall, the new system’s long life and 20 percent efficiency made it the best solar flow battery device yet.

There’s still plenty of research to be done before such devices would make practical renewable-energy solutions. Increasing the size and scale of the current small gadgets in the research lab is one challenge. And even though the researchers created a relatively long-lasting battery, real-world applications demand still greater robustness. The Jin lab is continuing to develop even more efficient solar flow batteries while also experimenting with practical trade-offs to reduce the cost of the devices.

That research could one day yield a new way to harvest, store and use the sun’s energy.

“Our eventual goal, if we can make this practical, is to target solar home systems,” says Li. “People who don’t have electrical grid access could use this device to have reliable electricity.”

This work was supported in part by the National Science Foundation (grant 1847674).