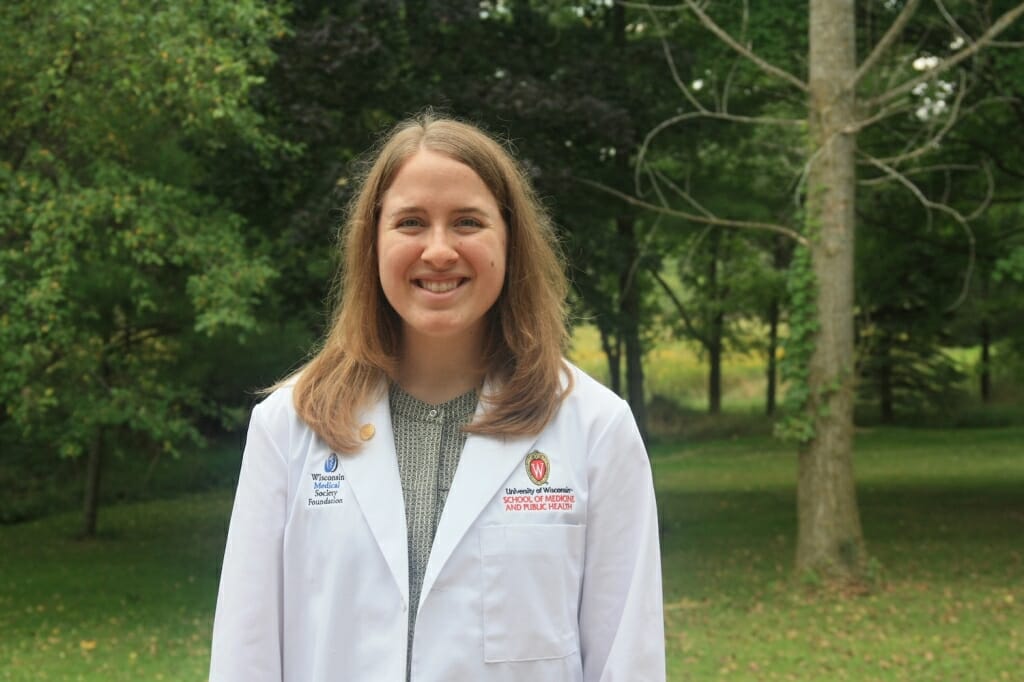 Mary Finta, who will receive her M.D. from the School of Medicine and Public Health on May 10, has focused on rural medicine. Submitted photo

Growing up in a small town with a mother who had been a physician there for decades was both a blessing and a curse for Mary Finta.

“Growing up, we couldn’t get through the grocery store in any less than an hour because she would run into people she knows all the time,” Finta laughed. “But I think it’s cool that a community can be that tight knit, that your physician or healthcare provider can offer you really great care and also just be a normal person out in the community that you see on a regular basis.”

As safe and as nurturing as Marshfield was, the city of roughly 20,000 people in central Wisconsin and home to the world’s largest round barn was not the place she envisioned spending her adult life. Like most kids who graduate high school in a small town, she said the last thing she wanted to do was stay, so she opted for a big city environment by enrolling at the University of Minnesota Twin Cities.

But during a study abroad program in Spain, where she was stationed at a nursing home in a rural part of the country, her own rural roots – and a newfound appreciation for small town life  – came into focus. 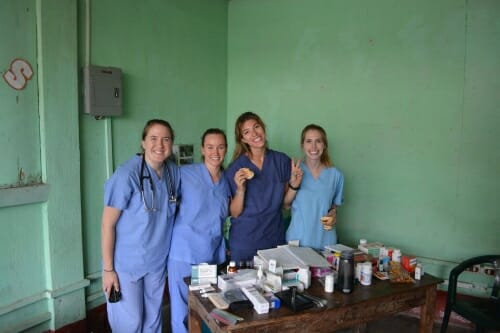 Mary Finta, on the left, at an international rotation in Guatemala that she served during medical school. Submitted photo

As she shadowed nurses and geriatricians making their rounds and going through their daily routines, she was exposed to the creativity required by rural medicine and the unique relationships between its doctors and patients. If the hospital didn’t have the resources to do the things available to larger, more urban centers, like a CT scan, the doctors would come up with other ways to answer the question that needed to be answered. And it was striking how deep and invested the relationships that developed between the doctors and their patients were, she said, most notably those of a veteran geriatrician and his patients, who had, a lot like her mother back in Marshfield, worked at the same rural hospital for decades.

“I thought that that was a really creative approach to medicine, being able to rely on your intuition a little bit more,” she said. “And I just appreciated that sort of relationship that you can get that isn’t always possible at a larger center. Like, he would see them at the grocery store and want to say hi to them and talk to them. I just thought it was really cool that they could forge those deeper relationships.”

Finta, who will graduate with an M.D. on May 10 from the Wisconsin Academy for Rural Medicine, the program within the University of Wisconsin School of Medicine and Public Health that prepares medical students to work in rural areas, has spent the past two years following her passion for rural medicine first sparked in the Spain countryside. And she’s done it, in all places, at the same Marshfield clinic that her mom has worked at for nearly 30 years, as she did rotations at WARM’s Marshfield Clinic Health System/Northern Academic Campus.

“For me there’s something really special about working in the same hospital as my mom,” she said. “I think it’s really cool that she’s spent her whole life here and has really built up a practice, and now I get to sort of follow in those footsteps a little bit.”

Now, when Finta goes to the grocery store or the library or walks around town, she’s stopped by her own patients, not her mom’s. What used to annoy her as a kid now points to the unique opportunities present in rural settings for developing relationships that go beyond the walls of the hospital.

But she approaches these interactions carefully, so as not to breach confidentiality, she explains. Besides, her patients usually want to talk about their kids or their days – normal, casual conversation, in other words– not their medical conditions.

“It’s little things like that more so than, ‘Let me offer you medical care in the bread aisle.’”

One persistent challenge is rural health disparities. Partly due to a lack of resources, especially when compared to more urban hospitals, and high levels of uninsurance and underinsurance, rural populations have worse health outcomes than their urban counterparts.

There’s also a significant geographic shortage and maldistribution of physicians in Wisconsin. While 28 percent of Wisconsin residents live in rural areas, only 11 percent of physicians have rural practices. Geographic isolation, lower socioeconomic status, higher rates of health risk behaviors, and limited job opportunities also contribute to these health disparities, according to the Rural Health Information Hub.

“Growing up here, you don’t think about things like health disparities and patients who don’t have insurance or who are undocumented immigrants who can’t get insurance,” Finta said. “So coming back here and seeing that those are still very real issues in a rural setting where there’s not necessarily resources to address those things all the time has been really interesting for me to try figure out.”

How to address health disparities when there’s not ample resource to go around has been the mission of both Finta and WARM, and Finta said disparities are especially bad at Marshfield’s free clinic, which serves a lot of uninsured and underinsured people, including undocumented immigrants.

To stretch its resources, the clinic has had to get creative. For instance, the clinic puts on a diabetes clinic each month solely dedicated to improving diabetes outcomes. Insulin is expensive, so patients with too much will donate it, allowing those without insurance to access the essential drug without going bankrupt.

The importance of insurance to health outcomes applies to much more than just diabetes, Finta said, and the free clinic is continually working to better meet needs.

“I think the free clinic is helping, but there’s certainly still lots of progress to be made,” she said.

While Marshfield doesn’t necessarily have the advanced lab or diagnostic testing that some urban hospitals have, living and working in a rural center gets doctors invested in the community and wanting to serve that community outside of the hospital, she said.

“People who choose to practice rural medicine tend to be very invested in that cause, and so the people around you are really working towards the same goal that you are in wanting to bridge the gaps between those that have resources and those that don’t,” she said. “I think that’s really special, that everybody really is in this place in the middle of nowhere because they want to be there, and they want to make that place a healthier and better place for people to live.”

Although her time at Marshfield is over, she’s keeping an open mind for her future plans. She will do an internal medicine residency at University of Michigan in Ann Arbor, a place she said will be great for training purposes while also retaining a small town feel. She could see herself returning to a rural area, though.

“I think there’s a lot of need in rural communities, and I want to be one of the people who can help meet those needs.”