Michael Lenn will join UW–Madison as director of federal relations.

Lenn brings more than 15 years of experience working on Capitol Hill in Washington, D.C., to the role. He recently led Insured Retirement Institute’s legislative strategy as vice president for federal affairs. Before that, he worked for Rep. Jim Sensenbrenner, R-Wis., for nearly 15 years, most recently as his chief of staff.

A Sheboygan native, Lenn is looking forward to once again working for the state he grew up in. 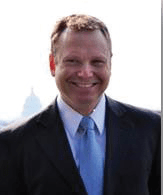 “I am excited to return to Capitol Hill to advocate for the flagship university of my home state,” said Lenn. “I look forward to advancing UW–Madison’s reputation as one of our nation’s premier public research universities.”

Lenn’s background in health care and energy policy, combined with his experience as oversight counsel for the U.S. House Committee on the Judiciary, will help him monitor issues important to UW–Madison on Capitol Hill and with federal agencies.

Benjamin Miller, who recently left the role of director of federal relations to become assistant vice chancellor for government and corporate affairs at UW–Madison, is confident he is leaving his previous job in capable hands.

“Michael knows Capitol Hill well and after working for the dean of the Wisconsin delegation for almost fifteen years, he has the relationships necessary to be an effective advocate for UW as we head into the next congressional session,” Miller said.

Lenn, an alum of UW-La Crosse, is a member of the Wisconsin State Bar who graduated from George Mason University School of Law in 2005. He begins today, Jan. 3.

The Office of Federal Relations advocates on federal policies and issues that affect the university, coordinates issue briefings for members of congress and their staff, and serves as a liaison between the UW and the federal government. It has an office in Washington, D.C.