Keck zooms in on the weird weather of Uranus

Capitalizing on the incomparable optical capabilities of the Keck Telescope, scientists have gained an unprecedented look at the atmosphere of Uranus, providing new insight into some of the most enigmatic weather in the solar system.

A pair of images unveiled here at a meeting of the Division for Planetary Sciences of the American Astronomical Society, reveal more cloud features – an abundance of atmospheric phenomena that vary dramatically in size, brightness and longevity – than have been observed before on Uranus. 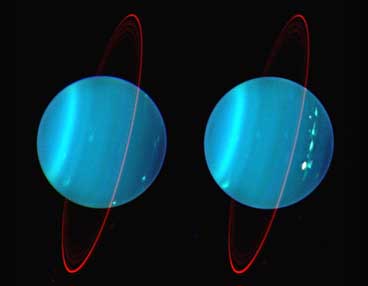 The two sides of the planet Uranus, as viewed in this composite image, by the Keck II Telescope at near infrared wavelengths. These new images of the seventh planet from the sun promise to help scientists unravel the mysteries of the weather on Uranus. More detail. (Image courtesy Lawrence Sromovsky, Space Science and Engineering Center.)

“The cloud features range from small to large, from dim and diffuse to sharp and bright, from rapidly-evolving systems to stable features that last for years,” says Lawrence Sromovsky, a senior scientist at the Space Science and Engineering Center.

What’s more, the new Keck images captured several Uranian weather oddities, including a big southern hemisphere storm feature that, during the course of several years, seesaws over 5 degrees of latitude.

“It’s weird behavior that hasn’t been recognized before on Uranus. It’s similar to what’s been seen on Neptune, although there the oscillation is much more rapid,” Sromovsky explains. “It is not surprising to see cloud features drifting in latitude, but our models don’t show these oscillations. We don’t know what makes it keep coming back to its starting point.”

Another unusual Uranian weather feature is a long, narrow complex of cloud features that is probably the largest group of atmospheric features ever seen on the planet. Spotted in the northern hemisphere of Uranus, the 18,000-mile-long complex of clouds dissipated completely during the span of a month.

“These more dynamic systems seem to develop at northern latitudes where they rise to even higher latitudes, apparently using up energy and dissipating relatively rapidly,” says Sromovsky, who conducted the new Keck observations with Patrick Fry, also of the Space Science and Engineering Center.

Together, the new images of Uranus reveal more than 30 cloud features, exceeding the total observed in all pictures obtained by the Voyager probe, the Hubble Space Telescope and other telescopes up to the year 2000.

The scientific value of the new pictures lies in their ability to help scientists unravel some of the atmospheric novelties of Uranus, the seventh planet from the sun. The cloud features they show, for example, are being used to trace and help define wind patterns and predict the motions of the large storm systems that sweep across the pale blue planet.

“The large, longer-lived cloud features of Uranus may be underpinned by giant hurricane-like vortices, as we’ve seen on Neptune,” says Sromovsky, “but it’s unlikely that they are as violent as the hurricanes that routinely batter Florida, for example.”

Earthly hurricanes, he explains, dispense a lot of energy. Uranus, which is 19 times as far from the sun as the Earth, has far less solar energy to dissipate.

Uranian storms seem to survive and thrive because the atmosphere is “slippery,” providing less of the atmospheric resistance that help storms on Earth dispense their energy.

“There is very little temperature contrast and very little energy to drive the weather in Uranus,” says Sromovsky. “Whatever is happening has to be well lubricated; it has to be a low-friction environment.”

The quality of the new images, says Sromovsky, demonstrates the astonishing optical capabilities of one of the world’s premier ground-based telescopes: “The image quality is better than anything we’ve seen before. It is amazing that the amount of detail we can see from the ground with Keck far exceeds what we could see with Voyager during its relatively close pass by the planet. And we can get better resolution than Hubble, especially at the near infrared wavelengths we use to improve cloud contrast.”

Situated at the summit of Hawaii’s dormant Mauna Kea volcano, the Keck Telescope boasts a 10-meter diameter segmented mirror, and a revolutionary adaptive optics system that detects and corrects most of the atmospheric effects that blur viewing.