The Wisconsin Institute for Discovery (WID) will usher in a new year with a new director: Jo Handelsman, a Yale University professor and the associate director for science in the White House Office of Science and Technology Policy. 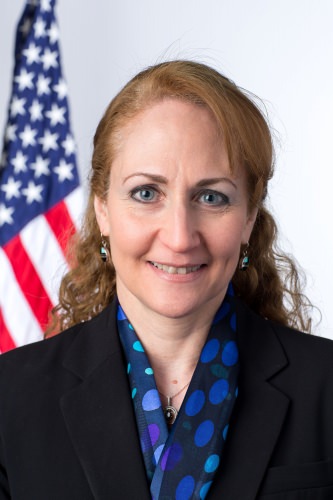 “I’m thrilled to welcome Dr. Handelsman back to Madison. In addition to being a world class researcher, she is nationally renowned for her impact as a teacher, role model, mentor, and an advocate for women and minorities in science careers,” says Marsha Mailick, UW–Madison’s vice chancellor for research and graduate education. “Jo is an inspiring individual who brings creativity, a spirit of experimentation, exemplary leadership skills and a commitment to rigor, that make her a great fit for UW–Madison.”

Handelsman begins her position on Feb. 1 and will report to Mailick. In addition to being named WID director, Handelsman will be honored with a distinguished named chair.

At Yale, Handelsman is a Howard Hughes Medical Institute Professor, the Frederick Phineas Rose Professor in the Department of Molecular, Cellular and Developmental Biology, and founder of the Yale Center for Scientific Teaching. For the last two years, she also has held the White House position.

Mailick calls this an exciting time for WID as it begins a new chapter under Handelsman’s leadership.

“I’m confident that moving forward WID will be a catalyst for discovery at UW–Madison,” Mailick says. “Jo is committed to WID’s mission and was instrumental in developing it while at UW–Madison several years ago.”

She became professor and chair of the UW–Madison Bacteriology Department in 2007 and served in that role until 2009.  She was co-founder of the Women in Science and Engineering Leadership Institute at UW–Madison and co-director from 2001 to 2007 and founded the Wisconsin Program for Scientific Teaching.

Among her many awards, she has received an Honorary Doctor of Science from Bard College in 2013, the American Society for Microbiology Graduate Microbiology Teaching Award in 2012, and was named one of the “Ten People Who Mattered this Year” by Nature in 2012. In 2011, President Obama awarded Handelsman the Presidential Award for Science Mentoring.

“Jo is an inspiring individual who brings creativity, a spirit of experimentation, exemplary leadership skills and a commitment to rigor, that make her a great fit for UW–Madison.”

Her book Entering Mentoring: A Seminar to Train a New Generation of Scientists, and associated course, are used by more than 150 U.S. universities. She was editor-in-chief of the academic journal DNA and Cell Biology. She’s also nationally recognized for her work on understanding implicit biases that shape scientist attitudes and their behaviors towards other people.

Handelsman’s research interest lies in understanding the structure and function of microbial communities and the signals that govern them through the application of metagenomics, genetics and small molecule chemistry. Her areas of emphasis include biochemistry and genetic regulation of antibiotic production, microbial diversity, antibiotic resistance, and symbioses in communities in soil, on plant roots and in insect guts. Her integration of biology with computational sciences and chemistry reflect the interdisciplinary nature of WID’s mission.

Handelsman cites her commitment to UW–Madison as a land grant university and its mission to public education and the Wisconsin Idea as reasons to return to UW.

“I am thrilled to be returning to UW–Madison, one of the nation’s great public universities,” Handelsman says. “The high quality of the faculty, staff and students — as well as the extraordinary commitment of the university to the State of Wisconsin through the Wisconsin Idea — make UW a truly singular institution. It is one of the few universities with the breadth and versatility to address the challenges of the future.”

“I believe WID represents an essential piece of Wisconsin’s future — a showcase for the wonders of science and technology, an intersection for the public and the academic community, and a place for fusion of science and the arts — all of which can unite to fuel Wisconsin’s innovation economy.”

Handelsman says WID can be a catalytic force for innovative research in the lab, as well as entrepreneurship. She refers to WID’s potential as octopoid — allowing communities and culture to take over and allow for random collisions and inspiration that lead to big breakthroughs.

“I believe WID represents an essential piece of Wisconsin’s future — a showcase for the wonders of science and technology, an intersection for the public and the academic community, and a place for fusion of science and the arts — all of which can unite to fuel Wisconsin’s innovation economy,” Handelsman says.

“Jo brings an exceptional wealth of accomplishments in research, modern teaching methods and science policy from her diverse experience spanning academia to the White House,” says Paul Ahlquist, professor of molecular virology, oncology and plant pathology and an investigator of the Morgridge Institute for Research and the Howard Hughes Medical Institute. Ahlquist chaired the 10-member committee that chose finalists for the position. “The combination of these broad insights and outside experience with Jo’s inside knowledge of UW–Madison makes her return a major win for the entire campus.”

“We had a very strong pool of candidates for the WID director position,” says Mailick. “I’d like to thank the search committee for its generous donation of time and commitment to the process, and Christopher Bradfield, who has served as interim director of the Wisconsin Institute for Discovery.”