As a columnist for the Wall Street Journal, UW–Madison alum Jason Gay regularly shifts between irreverent humor and serious themes.

Expect something similar at the Kohl Center this December. 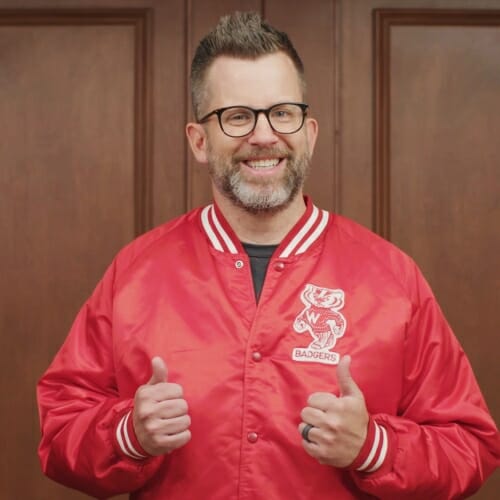 Jason Gay says the reaction to his selection as commencement speaker has been one of universal shock.

Gay, a 1992 political science graduate, has been selected as keynote speaker for winter commencement. He’s pretty sure something’s gone wrong at his alma mater.

“Chancellor Blank must have meant to ask J.J. Watt again,” he says, “but when she typed in the first ‘J,’ my name came up in the email address, and she didn’t notice until it was too late.”

Lauren Sorensen, senior class president, insists it didn’t happen that way. The senior class officers choose the commencement speaker and recommend their choice to the Chancellor’s Office. The university covers travel expenses but does not pay a fee or other honorarium.

“Commencement is meant to be fun and enjoyable — a celebration — and we really felt he’d bring a humorous tone,” Sorensen says. “We also felt that he exemplifies the versatility of a Wisconsin education. He’s had this interesting career where he’s gone from political science to sports and humor columnist.”

Gay is the Wall Street Journal’s sports columnist and a humor columnist for its Review section. He has written for publications ranging from Vogue and GQ to Rolling Stone and Outside and is the author of the 2015 bestseller “Little Victories.” In 2016, The Society of Professional Journalists named him Sports Columnist of the Year, and he has been a finalist for the Thurber Prize for American Humor.

Gay says the reaction to his selection as commencement speaker has been one of universal shock.

“My friends and family assume there’s been a terrible mistake, as they haven’t listened to a word I’ve said in years,” he says. “I am hoping my old college roommates are jealous. Then again, I’m not sure I want them to find out. I may still owe some of them money.”

“My friends and family assume there’s been a terrible mistake, as they haven’t listened to a word I’ve said in years.”

Gay has become well-known for gleefully bashing the University of Michigan football team — one of his columns last month was titled, “Yes, to Save the World, Wisconsin Really Needs to Beat Michigan.” (World saved: UW–Madison prevailed 35-14)

Given the pomp and circumstance of commencement, will Gay go easy on Michigan for the day?

“Absolutely not,” he says. “Once a Badger graduates from UW–Madison and goes out into the wild, it’s even more essential to avoid Wolverines.”

More information about commencement weekend — including parking, school and college ceremonies, and answers to frequently asked questions — is available online at commencement.wisc.edu, by phone at 608-263-2400 or by email at commence@chancellor.wisc.edu.