By electrically stimulating nerves, neuromodulation therapies can reduce epileptic seizures, soothe chronic pain, and treat depression and a host of other health conditions without the use of conventional drugs like opioids.

Now, University of Wisconsin–Madison biomedical engineers and their collaborators have made a significant advance that could dramatically reduce the cost of neuromodulation therapy, increase its reliability and make it much less invasive.

With a type of electrode that can be injected as a liquid and then cure in the body, the researchers have laid the groundwork for a new kind of neural interface system.

The researchers unveiled their creation, which they’ve dubbed the “injectrode,” in a paper published online this week in the journal Advanced Healthcare Materials. 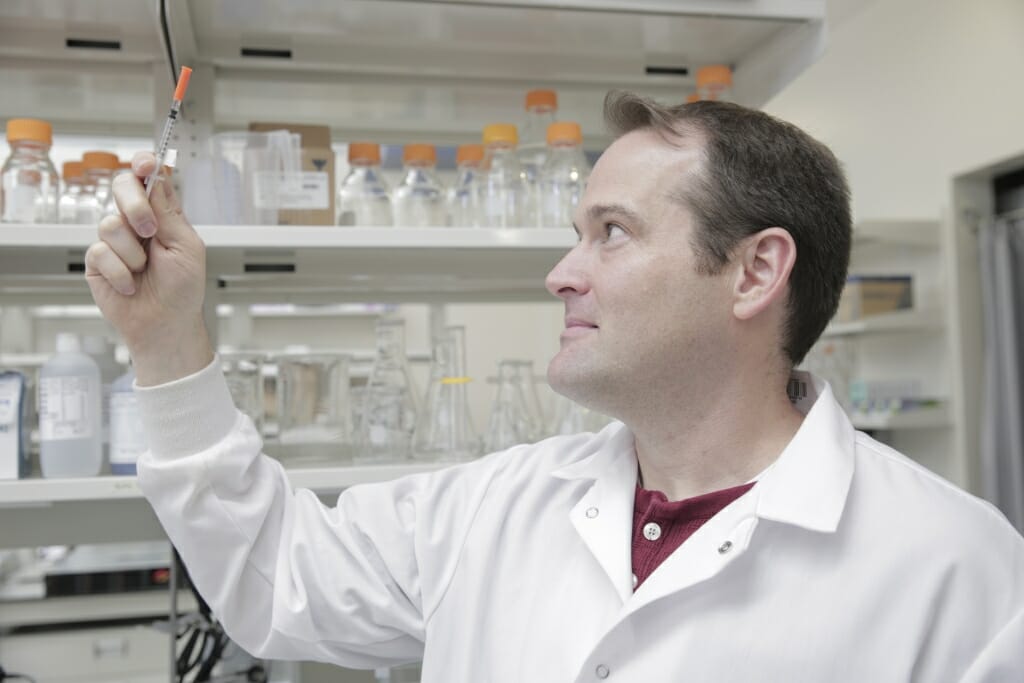 Today’s neuromodulation treatments rely on surgically implanted devices that can cost up to six figures, require complex procedures to install, and often fail — given that they’re rigid devices attempting to mesh with soft biological tissue.

The researchers’ system leverages an entirely new way of thinking.

“You can inject the liquid around the nerve, and it cures in the body to create a wired contact,” says Kip Ludwig, a UW–Madison professor of biomedical engineering and neurological surgery. “Typical implants are really stiff, and so as the body moves, they wear and tear and break down. Our liquid cures, and the result is much closer to the normal elasticity of tissue. You can actually stretch it and increase its size 150 percent to 200 percent without losing its conductivity.”

To create the injectrode, the researchers mixed a silicone base — similar to surgical glue — with small metal particles to make the liquid sufficiently conductive.

They put their device through a battery of Food and Drug Administration preclinical tests, and used it to induce heart rate changes in pigs by stimulating their vagus nerve, an approach that’s shown promise for treating heart failure, hypertension and other maladies.

“We essentially went through the standard repertoire of electrochemical tests to show this acts like a standard wire electrode that could be used to stimulate the nerve,” says James Trevathan, a postdoctoral fellow in Ludwig’s lab and first author on the study. 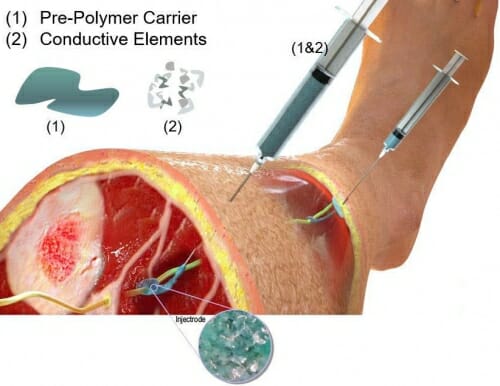 The researchers are testing a scheme in which they inject the fluid around the nerve, then extrude a thin insulated string of the material back to just underneath the surface of the skin, where they inject more of the composite material. Illustration courtesy of Neuronoff, Inc.

Ludwig co-authored the study and cofounded Neuronoff, a company based on the injectrode, with Case Western Reserve University biomedical engineering professor Andrew Shoffstall and Neuronoff CEO Manfred Franke. They’re also part of a multi-institution team that recently secured a $2.1 million grant from the National Institutes of Health to further develop the system to stimulate spinal nerves as a non-opioid alternative to treating chronic back pain.

The paper and grant represent crucial early steps in a larger effort to create a minimally invasive system for neural stimulation.

As part of the NIH grant, the researchers are testing a scheme in which they inject the fluid around the nerve, then extrude a thin insulated string of the material back to just underneath the surface of the skin, where they inject more of the composite material. Then they can use a basic transcutaneous electrical nerve stimulation, or TENS, unit — the kind you can buy at a department store or pharmacy — to stimulate the nerve from the surface of the skin, making the whole setup less expensive and more adaptable compared to traditional implanted electrodes.

“We’re making a bypass from the surface of the skin to the location we want to stimulate,” says Ludwig, who envisions eventually using a robotic surgical system for a procedure that would be akin to getting a tattoo. “As we learn more and more about how to interface with the nervous system, we’re not limited to what we’ve implanted through an invasive surgical procedure. We can actually change how we stimulate, how we talk to the nerve, because we’re essentially just routing our connection to this deep nerve back to the surface of the skin.”

Other coauthors on the paper include Professor Justin Williams and senior scientist Aaron Suminski of the UW–Madison Department of Biomedical Engineering, Doug Weber of the University of Pittsburgh, and researchers from Mayo Clinic.

“This has the potential to be the most dominant medical treatment of any treatment out there in the next 10 to 15 years,” Ludwig says. Video: UW–Madison College of Engineering

IMAGES AND VIDEO AT: https://uwmadison.box.com/v/injectrode-ludwig