In uncertain times, you can lean on rocks … and The Rock What happens when you ask The Rock about his favorite kind of rock? On Monday, Geoscience professor Stephen Meyers found out through a Twitter campaign for his Geosci 100 class, Introductory Geology.

In his last in-person lecture before University of Wisconsin–Madison classes moved online due to coronavirus concerns, Meyers asked his 428 students what they wanted to see for the rest of the semester, and how he could make the rest of the class a meaningful experience even when they couldn’t meet in person. Meyers said the students expressed interest in hearing from UW–Madison Chancellor Rebecca Blank and actor Dwayne “The Rock” Johnson, since Meyers sometimes made analogies about him in his teaching.

Meyers consulted with his colleagues at the tadada Scientific Lab, a collaborative project he co-founded to help students cultivate an emotional connection to science through art and other creative media. They decided to start a Twitter campaign, and tweeted at The Rock on April 23.

On Monday, The Rock answered, sharing in a series of tweets his favorite geological place — the Kilauea volcano in Hawaii — and his favorite type of rock: a big, brown, bald, tattooed Rock.

Hello Professor & the 428 students of GeoSci 100 at Univ of Wisconsin–Madison. I’m flattered your students saw me as “the dream”, much like my wife on our date nights.. but I digress.
My favorite geological place would be Kilauea Volcano, in Hawaii. You can literally, walk up

Some of my favorite and most intriguing geoscience topics are seismology (Mother Nature rules), paleontology & oceanography.

And as for my favorite rock.. well, from the three scientific classes of rocks – sedimentary, metamorphic & igneous. I would have to go with the big, brown, bald, tattooed Rock.
That’s my favorite species of Rock.
And if all your 428 students want a big fat A in this class..

Geosci 100 student Jack Lipstone said he had “full confidence” in Meyers’ ability to get a reply from The Rock, and he retweeted the tweet as soon as it came out, so he’d get a notification when The Rock did respond.

“Social media, especially Twitter, is so strong nowadays in terms of connecting people from all over the world, no matter what their backgrounds are,” Lipstone said. “[The Rock’s reply] proved to me that you never know how easy it could be to get in contact with someone if you are passionate about it.”

Geosci 100 student Tobias Wynn said Meyers’ efforts to engage students in meaningful ways set him apart from a lot of his other teachers.

“He makes it very clear he wants to bridge the gap between emotion and science,” Wynn said. “Because he says science will sometimes seem a little cold, but he doesn’t view it like that — he thinks everyone can be scientists. And I think that reaching out to The Rock was something that could bridge that gap, where [science] feels a little more human.”

Meyers calls his last Geosci 100 lecture of the semester “Living in an Uncertain World,” and discusses how science can empower people to recognize possibilities and opportunities hidden in uncertainty. This year, since he can’t lecture in person, he and the tadada team have created a multimedia production for the students. 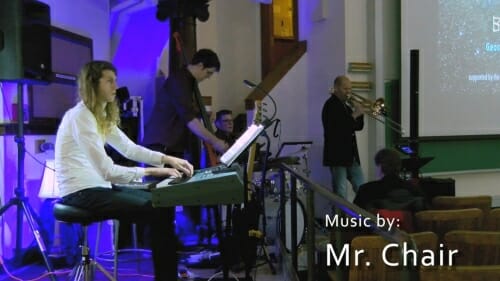 This production will feature The Rock’s response, a special video message from Chancellor Blank and a musical performance from local band Mr. Chair, which features UW–Madison music professor Mark Hetzler on trombone. It will also highlight other music, art and film contributions from the tadada team, including UW–Madison Geoscience graduate students Naomi Barshi, Andrew Jones, Ethan Parrish and Colby Schwaderer.

“I have never been in a time when life was more uncertain,” Blank said. “I don’t know who is going to be on campus next fall. But I do know that the sort of human touch and the outreach that you all do every day with your friends really matters.”

Meyers hopes The Rock’s reply and the rest of the content in the final lecture will help students feel connected to the University of Wisconsin. His original tweet got over 700 likes, and The Rock’s reply has been shared by students, alumni and Badgers fans outside of the Geosci 100 class across social media platforms.

“It quickly became clear that the tweets would bring the students together, in a medium that they relate to,” Meyers said. “It would connect them back to UW–Madison, and let them know how special this place is. We will never stop looking for hope and possibilities immersed in the uncertainty. And for a brief moment, the tweets took their minds off of the worries of the day.”