In February 2017, Steve Meyers was basking in the glow of having published a paper in the journal Nature confirming the chaotic behavior of the solar system – a question that had plagued scientists for nearly 30 years.

But then he got an email from a BBC reporter that quickly soured his mood. The reporter asked whether Meyers, a professor of geoscience at the University of Wisconsin–Madison, agreed with a quote in a story about his study that was published in another outlet called Daily Wire.

The BBC reporter told Meyers that his rigorous science examining climate cycles of the Earth was being used as evidence for climate change denial. The article claimed: “… studies like these highlight that the role man plays on the planet is dwarfed by natural phenomena utterly out of our control.”

Climate Feedback, a website published by a global network of scientists, helped counter the false claims in the Daily Wire. But the experience left Meyers hungry for a way to do more. With funding from a Vilas Professorship, he decided to tackle the problem in the undergraduate classroom.

“I realized that some basic science literacy was urgently needed to help deal with false information being circulated,” he says.

From that grew a new initiative Meyers calls “tadada Scientific Lab,” in which he began to conceptualize new ways to teach science to non-science undergraduate students, like the 300 or more who enroll in Meyers’s general geology class each semester to help satisfy graduation requirements.

“Ideas for communicating scientific wonderment emerged from all corners of life – books I’d read with my young son, conversations with family and friends, a canyon wall, a radio program, an art exhibit, a comedian, a walk down the street,” Meyers says. He spent much time developing these ideas with his spouse, and partner in tadada Scientific Lab, photojournalist Gigi Cohen.

One year after that fateful email from the BBC reporter, Meyers was sitting in a Madison coffee shop listening to live music by a band called “Mr. Chair” when these ideas crystallized in a new way. Perhaps, one might say, they harmonized.

“Inspired by the textures and sounds of the band, Mr. Chair, my thoughts turned to the origin of the universe and our solar system,” Meyers says. “There was something amazing here, something that resonated with how I experience science.”

So on April 3, 2018, Meyers hosted the band Mr. Chair, led by UW–Madison professor of trombone, Mark Hetzler, in his undergraduate classroom. The goal was to use music and sound to teach his Geoscience 100 students about the beginnings of the universe, of the solar system, and of the Earth.

Geoscience professor Steve Meyers has come up with new ways to teach science to non-science undergraduate students, like these ones in his general geology class. Photo by Ethan Parrish

The result was Beginnings, a lecture in four acts: Expansion, Contraction, Catastrophe, and At Time’s Horizon. In Expansion, Meyers showed a video clip of Hetzler playing his trombone from the passenger seat of a car driving past a stationary camera. The changes in Hetzler’s B-flat note illustrated how the Doppler effect works – a sound coming toward you is always higher pitched than a sound moving away from you.

Meyers used this to explain that sound travels in waves, which is also true of light, so scientists can similarly look at the way light shifts – in the same way that sound shifts – to determine if objects are moving away from a fixed point, or toward it. This, he went on to explain, is how we know the universe is expanding.

In Act Two, he showed the students a YouTube video of Olympic gold medalist figure skater, Yuzuru Hanyu, performing his winning routine. In it, Hanyu is completing multiple rotations on the ice and his speed changes when he goes from arms and leg outstretched, to a tucked position. Meyers used this to explain the conservation of angular momentum, or the change in the spin of the solar system and objects within it, as they get smaller (contract) or larger (expand).

Before the lesson began, he asked the class what they would need to know in order to determine whether the Big Bang happened. What hypotheses might they test? As the students brainstormed, Mr. Chair provided musical accompaniment.

“My ambition is to awaken their inner scientists, especially with music, art, and personal stories” Meyers says. “In my dream of how to teach the course, if students could feel the emotion and motivation of science, they’d be hooked on the life-long journey of scientific literacy.”

Live music is just one component of Meyers’s approach. He wants to help breathe life into large undergraduate classes, help students understand foreign concepts by pulling from the familiar, and provide lessons that last beyond a survey course in geology.

“I want them to get excited about science and its place in their lives,” Meyers says. “How do we cultivate future leaders in science? How do we show them the amazing possibilities that exist for them, and break down barriers?” 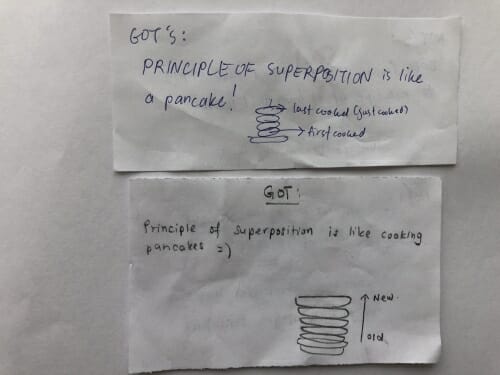 Students fill out “Got” notes telling of concepts they learned. Submittted photo 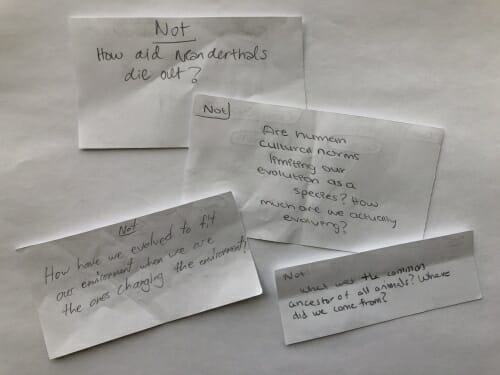 “Not” notes tell of concepts they haven’t grasped yet. Submitted photo

One way has come from a

small exercise he picked up in Italy, where he co-directs a summer school on climate change. At the end of each class, students provide responses to the lecture on two sides of a small piece of paper. On the side labeled “Got,” they summarize something they have learned – in words or pictures – and on the “Not Got” side, they share something that remains nebulous, some concept they haven’t quite grasped yet.

The approach allows students to express their personal voice and creativity, Meyers says, and he builds their “Gots” into the lectures, using them to answer other student’s “Nots.” Some of the responses he has received have surprised and delighted him.

With filmmaker and geoscience graduate student Ethan Parrish, Meyers also created a short documentary about Beginnings. A comic book for the class is currently underway, too.

Throughout his career, Meyers says he has been “driven by research and discovering new things, pursuing big questions in science.” But teaching geology in a way that emphasizes a personal-emotional connection to science, while cultivating critical thinking and scientific literacy, Meyers says: “has been a highlight of my career.”

Along with Cohen, he plans to continue developing this approach to teaching through tadada Scientific Lab.  “It’s been incredible to see the outpouring of interest from local musicians and artists,” Meyers says.