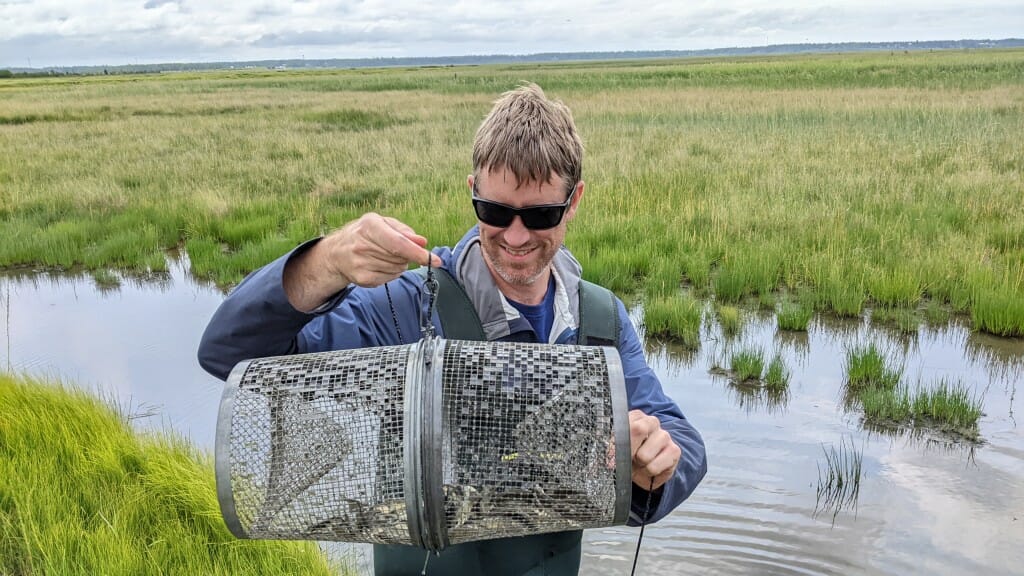 Jesse Weber collects stickleback with a minnow trap in the Kenai Peninsula of Alaska. Photo by Matt Chotlos

At first blush, sticklebacks might seem a bit pedestrian. The finger-length, unassuming fish with a few small dorsal spines are a ubiquitous presence in oceans and coastal watersheds around the northern hemisphere. But these small creatures are also an excellent subject for investigating the complex dance of evolutionary adaptations.

A new study published Sept. 8 in Science sheds light on the genetic basis by which stickleback populations inhabiting ecosystems near each other developed a strong immune response to tapeworm infections, and how some populations later came to tolerate the parasites.

Evolutionary biologist Jesse Weber, a professor of integrative biology at the University of Wisconsin–Madison, is one of the study’s lead authors. Sticklebacks have long been a source of fascination not only for Weber, but for biologists all over the world — so much so that the fish are among the most closely studied species. 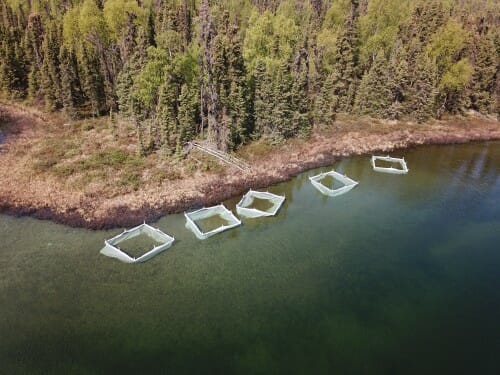 An aerial view of an experiment in the Kenai Peninsula of Alaska studying changes in stickleback traits in response to a new environment. Photo by Andrew Hendry

“We arguably know more about stickleback ecology and evolution than any other vertebrate,” says Weber.

This is in part because of sticklebacks’ rich abundance in places like Western Europe, where the fish have long been involved in biological study, Weber says. But the reasons for the species’ star status go well beyond happenstance.

“Sticklebacks are also just super charismatic,” Weber adds, noting the species’ complex courtship and territorial behaviors, as well as their diverse colors, shapes and sizes, all of which vary depending on the specific ecosystem they inhabit.

While sticklebacks’ diversity provides a foothold for understanding why animals evolve different traits, their value for scientists like Weber is boosted by their genetics. The fish have approximately as many genes as humans, but their genetic material is packed much more tightly — sticklebacks’ genome is about one-sixth the size of the human genome.

“Their genome is amazingly useful,” Weber says. “As far as we can tell, it’s just packed more densely. This means we can efficiently investigate their genetic diversity, allowing us to ask not only, ‘Why do new traits evolve?’ but also, ‘How are adaptations programmed into the genome?'”

On top of all that, sticklebacks take well to captive breeding. A single female can produce hundreds of offspring multiple times over the course of just a few months.

All these traits make stickleback an almost uniquely valuable species for studying the genetic basis for many types of biological adaptations. So, when Weber arrived at UW–Madison in the fall of 2020 from the University of Alaska Anchorage, he came with an entire fish colony in tow. Living in tanks, the colony contains fish from genetically distinct populations originating from different lakes and estuaries dotting northwestern North America. 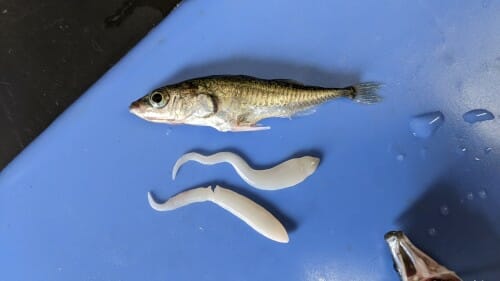 A three spine stickleback with tapeworms recently dissected from the body of the same animal. Photo by Natalie Steinel

In their quest to understand why and how the fish sometimes evolve to look and behave very differently even in relatively nearby lake systems, Weber and his colleagues can crossbreed these populations in various ways and map changes to their genomes across multiple generations relatively quickly.

Much of Weber’s scientific career to this point has focused on developing tools to make this type of work more efficient. More recently, Weber has turned to using these tools to investigate coevolution — the process by which two species adapt to the presence of one another within a shared habitat.

Specifically, Weber and his colleagues have sought to understand why sticklebacks in some lakes are much more likely to be infected with tapeworms than their counterparts in nearby lakes where the tapeworms are also present.

These investigations are beginning to bear fruit. Weber, along with colleagues at the University of Connecticut and University of Massachusetts Lowell, recently identified key genetic differences between the populations.

These differences indicate that all fish populations developed a robust immune response to the tapeworms when they first moved from the sea to new freshwater habitats near the end of the last ice age. But the immune response is costly in terms of both energy and reproduction. It also leads to a large amount of inflammation and internal scarring.

Weber’s work and that of his colleagues suggest that numerous populations eventually evolved to avoid these costs by ignoring, or in the lingo of immunologists “tolerating,” the parasite infestation. But the tolerant population still carries the genes that produce the immune response to the tapeworms.

While they haven’t yet tested it, Weber says it appears that these sticklebacks may have mutations to these “fibrosis-associated genes” that render them non-functional.

While the results are exciting for Weber, he’s already looking toward future research that he hopes will further tell the genetic story of sticklebacks’ abundant adaptations, and by extension reveal biological processes with implications across the wide diversity of life on Earth.

Read more about the study and its findings from the University of Connecticut.