Emilie Hofacker’s memento-filled office at UW–Madison reveals a couple of important things about her: She’s been a Badger for a while, and she’s deeply committed to student success.

Many of the items on her shelves and walls were presented to her by students, including almost two dozen awards thanking her for the role she played in their college success.

Hofacker will continue to impact students as the newly named director of the university’s Posse Program. The initiative identifies and awards full-tuition scholarships to public high school students with extraordinary potential who may be overlooked in the traditional college selection process. UW–Madison is one of 58 partner colleges and universities that takes part in the national program. 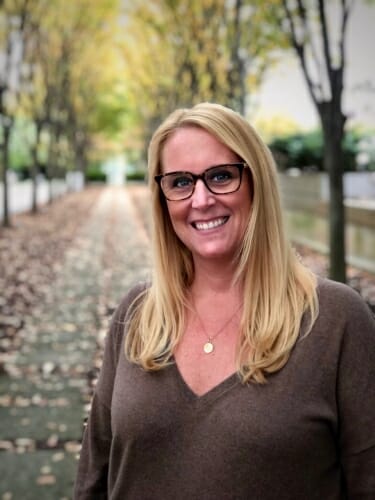 Hofacker was named to the UW–Madison position July 15 after serving as the program’s interim director for the past two years.

“Emilie brings a wealth of experience to the position, including having worked with underrepresented students at UW–Madison for 13-plus years, eight of which have been with the UW Posse program,” says Sherri Ann Charleston, an assistant vice provost in the Division of Diversity, Equity and Educational Achievement. “She is an outstanding leader and skillful collaborator with a passion and commitment for Posse that excites those who have the good fortune to work with her.”

Hofacker’s strong connection to UW–Madison began when she attended a seven-week-long summer science institute on campus her sophomore and junior years as a high school student from Kimberly, Wisconsin. She’s been in the UW–Madison sphere ever since.

As a UW–Madison undergraduate, she immersed herself in science and research, earning a bachelor’s degree in 2004 as a double major in biology and communication science (rhetorical studies). She earned a master’s degree from UW–Madison in 2006 in educational leadership and policy analysis.

Hofacker then worked on campus for several years as a program coordinator for the Precollege Enrichment Opportunity Program for Learning Excellence (PEOPLE). While earning her second master’s degree from UW–Madison, she began her association with Posse.

Nationally, Posse recruits, selects and trains public high school students from 10 major U.S. cities, then sends them to college in multicultural teams of 10 called “posses.” UW–Madison joined the program in 2002 and recruits from four of those 10 cities (Chicago, Los Angeles, Washington and New York).

Each fall, UW–Madison welcomes 40 new Posse scholars (four posses of 10 each). Each posse is assigned a mentor who stays with the group for its first two years. UW–Madison uses graduate students as mentors. That’s how Hofacker connected with the program — she served as the mentor for the first posse from New York when the city was added to UW–Madison’s lineup in 2011.

The New York posse also was the first at UW–Madison to be focused entirely on students planning to major in science, technology, engineering or mathematics — the STEM fields. (Scholars from Chicago, Los Angeles and Washington are not focused on any one discipline.)

“We have such a robust program here with phenomenal scholars who are amazing young people and leaders. They bring a beautiful and diverse presence to this campus.”

Since then, Hofacker has served in multiple capacities related to Posse at UW–Madison. She mentored a second posse of New York STEM students, served as the assistant director for Posse STEM initiatives, and became the founding director of the Office of STEM Initiatives within the Division of Diversity, Equity and Educational Achievement.

In 2017, she was asked to serve as the interim director for UW–Madison’s Posse program. She eagerly accepted.

“We have such a robust program here with phenomenal scholars who are amazing young people and leaders,” Hofacker says. “They bring a beautiful and diverse presence to this campus. We try to ensure that they have a wonderful experience here and are able to fully tap all the resources the university has to offer.”

Hofacker brings to the job years of research specifically related to Posse, underrepresented student populations, and STEM fields. Her second master’s degree in 2013 in curriculum and instruction focused on these areas, and she’s continuing the research as she pursues a PhD, also on campus.

As Hofacker begins her tenure, UW–Madison’s Posse program can claim several bragging rights. The university is the largest Posse school nationwide and the only one with a Posse director, a Posse office, and a dedicated Posse advisor. It also is one of the few institutions that taps graduate students to be mentors.

“A lot of what we do here is starting to be incorporated into the national model because they’re seeing the benefits of the approach,” Hofacker says.

“There’s a thing we call ‘Posse love.’ Once you’re a part of it, it will always be a part of you.”

Her goals as director include boosting connections with UW–Madison Posse alumni, creating a Posse advisory board, and strengthening the program’s fundraising efforts. She’d love for the program to be able to award mini-travel grants for professional development opportunities such as conferences and leadership workshops.

Students who travel tend to keep Hofacker in their thoughts. Years ago, Posse students began bringing back refrigerator magnets for her from all over the globe. Dozens now adorn her office. Other students have created artwork for her. One student gave her a giant wall hanging of the periodic table, a nod to her STEM work.

“It’s such a remarkable community,” Hofacker says of the Posse program. “There’s a thing we call ‘Posse love.’ Once you’re a part of it, it will always be a part of you.”