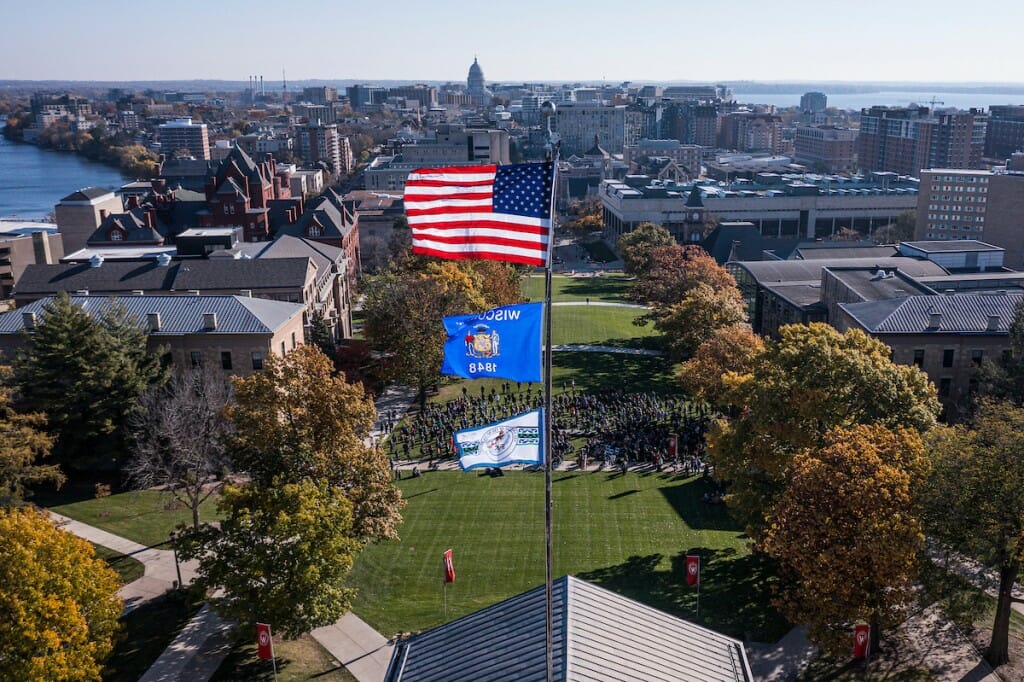 A drone captures the Ho-Chunk Nation flag being raised over Bascom Hall for the first time on Nov. 5, 2021. Several Ho-Chunk graduate students emphasized the importance of preserving Ho-Chunk history on campus, which was originally Ho-Chunk land.

Four Ho-Chunk graduate students at the University of Wisconsin–Madison are working to elevate the voices and experiences of Native American people, and to make academic and cultural spaces more accessible and beneficial to the Ho-Chunk community.

All four are pursuing PhDs: Kendra Greendeer in art history; Molli Pauliot in anthropology: Brenda Owen in nursing; and Adrienne Thunder in Educational Leadership and Policy Analysis. They reflected on their efforts in several recent interviews.

Their studies are in widely different areas but their goals are similar: Making their spaces — whether it’s museums, schools, or hospitals — more inclusive of and receptive to Ho-Chunk and other Native people, as well as preserving Ho-Chunk culture and history. UW–Madison occupies ancestral Ho-Chunk land, which the tribe was forced to cede in an 1832 treaty.

“My career journey started with an effort to make museum settings more accessible to Native people and for Native people to be more comfortable approaching collections,” said Greendeer, whose work in art history focuses on contemporary Native American women artists. 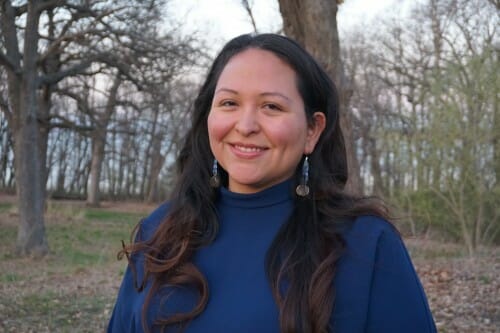 Greendeer worked with the National Museum of the American Indian in Washington D.C. after earning her master’s degree.

“It was incredibly exciting,” Greendeer said, “at the same time, though, I really saw the need for more Native people to be in curating positions, really creating the narrative around Native history.”

Narratives can be re-framed by changing who tells the stories of Ho-Chunk history, she said.

Pauliot’s work in anthropology involves working with Indigenous peoples in the Great Lakes region. She is researching the impact of the emerald ash borer, a beetle that has diseased and killed many ash trees, on Ho-Chunk ash basket weavers, as well as its intersection with technology. 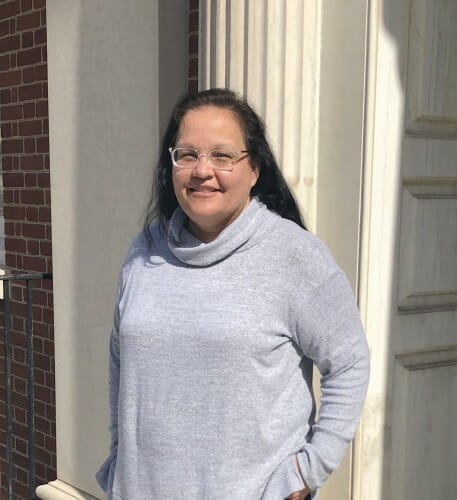 “It instilled a lot more self-respect, pride, connection, and a community,”  Pauliot said, “it was a component that helped heal some of the social issues and problems that we have.”

Pauliot shared her vision and focus for her work. “My ultimate goal is to develop programs that reteach Ho-Chunk history in a way that is seen as a strength,” Pauliot said, “I’ve been coordinating events with the university to develop more curriculum that the university can access.”

In addition to necessary changes in curriculum to reflect Ho-Chunk history, Pauliot noted the need for a new research center.

“An ideal thing would be for us to have an American Indian or Native American Research Center, and to focus on this Great Lakes region,” Pauliot said, “we need a home where the faculty are involved and teaching… [we need a place where] the research, the museum community, and the artifacts can be together.”

Both Greendeer and Pauliot noted the challenges they’ve encountered in doing this work at UW.

“It might be fair to say that the only changes [to Native work] I’ve witnessed on campus has been due to Indigenous people’s labor,” Greendeer said, “even the flag-raising or the land acknowledgment… they were Native people doing that work.”

Pauliot played a significant role in the historic first raising of the Ho-Chunk Nation flag over Bascom Hall in November 2021.

“The flag-raising received national attention,” Pauliot said, “ seeing something different happening at the university was huge.”

Pauliot emphasized the importance of teaching, and re-teaching Ho-Chunk history, such as the acknowledgment that UW–Madison land was once Ho-Chunk territory.

“The university is a land-based institution, so it’s a land grab,” Pauliot said, “But that’s not really what’s taught about the land grant… it’s the history that nobody really wants to talk about.”

Despite this, Pauliot spoke about why she does this work and continues to do this work.

“Hopefully, younger women are seeing us and know that they can do this too,” she said, “It takes personal strength to go ahead and to do any PhD program. But it takes more strength as an Indigenous woman to do it because you have all these barriers that you have to get past in order to get where you’re at.”

Thunder, who is the current Division Manager of Hoocąk Waaziija Haci, the Ho-Chunk Nation Language Division, became interested in her course of study during graduate school when she realized that she wanted to support students in their own educational journeys. 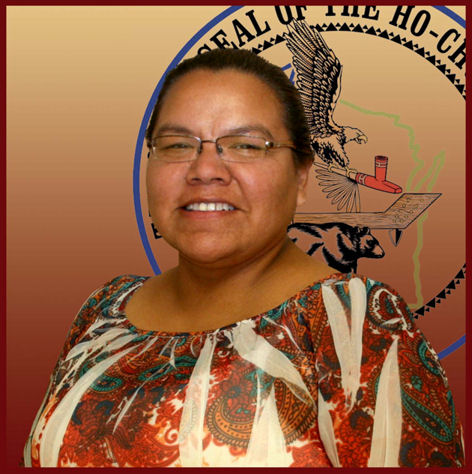 “I’ve been an explorer all of my academic life,” Thunder said, “I love learning and education.”

After completing graduate school and working in other positions, Thunder worked at the Cross-College Advising Service at UW–Madison. She soon decided that she wanted to focus her work more closely with Native students.

“During my [nursing] coursework, I learned about each body system, and I thought about my own family,” said Owen, who also earned a certificate in American Indian studies.  “My instructors always encouraged me to look at how particular diseases of body systems affected my Ho-Chunk family, particularly.”

In working closely with Native students at UW–Madison, Thunder became involved with other organizations dealing with higher education and found that there weren’t many Native people in higher education, and most were spread across various organizations. “I went around to all of them, [and] started having conversations with these folks in different groups about bringing this all together,” Thunder said. 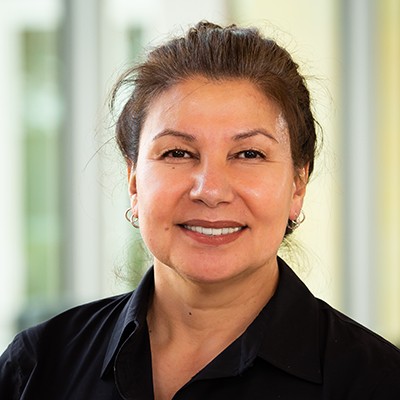 Thunder recognized that to affect broader change, she would need to be in a more administrative position. That way, she would be involved in critical conversations and larger decisions. Thunder also wanted to reconnect to her community and recognized the challenges the two goals presented.

“As I was getting kind of like further along in my career, the further away I got from the services to students and from my own community, which really bothered me,” she said.

Much of Thunder’s work focuses on changing education to make it more beneficial and accessible for Native students. Both her paternal and maternal grandparents were sent to Indian boarding schools, which attempted to eradicate the Indigenous languages and cultures of Native peoples and nations in an attempt to “assimilate” them into mainstream United States culture. That history colors the Ho-Chunk experience with education.

“What can we do to re-engineer education so that it serves our purposes and reflects our values and beliefs, rather than something that weakens us or makes us fearful of participation in education more broadly?” Thunder said.

In both Thunder’s and Owen’s work, the need for representation and preservation remains centrally important. Owen noted, “I think [representation] is very important for our youth in particular.”

“It’s nice to see more Native students in the nursing school, and hear their stories as well,” Owen said.

Thunder also spoke about the changes, and lack thereof, that she has seen at UW–Madison: “I think some of the longer-term and more entrenched issues are probably still there,” she said, “But I think there’s been a lot of growth… [including] having conversations around privilege, race, or gender.  I’m really glad to see a lot of those conversations  happening.”