In 1885, a decade before UW–Madison played its first football game on the site of Camp Randall, Native Americans competed in a game of lacrosse in the same area.

As the university celebrates Native November, the early lacrosse game is a reminder of how important the sport was to Native Americans for thousands of years — and how significant it is that the sport has made a comeback among today’s Indigenous people, says Aaron Bird Bear, tribal relations director for UW–Madison.

“Although the United States tried to eradicate all Indigenous language and culture, cultural phenomena like lacrosse somehow made it through, which is exciting,” Bird Bear says. “Indigenous people are in a period of linguistic and cultural revitalization in the 21st century, so this reengagement in lacrosse has been fantastic to see.” 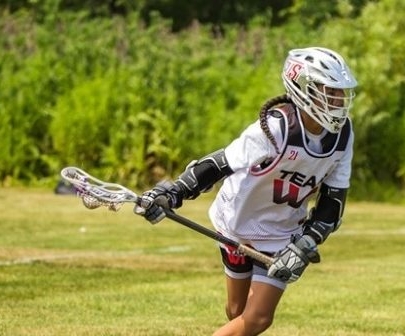 Lacrosse remains popular with Native athletes. Read about Julian Greendeer of the Oneida and Ho-Chunk nations by clicking on the photo. Photo courtesy of NDNSports

The 1885 lacrosse game in Madison occurred during the Wisconsin State Fair, which was held in the city at the time, according to Daniel Einstein, historic and cultural resources manager for the Division of Facilities Planning & Management. It was an exhibition game, preceded by Indigenous songs and dances.

Back then, the State Fairgrounds were located on the former military training grounds known as Camp Randall. The state purchased the fairgrounds in 1893 for sole use by UW–Madison, Einstein says.

Spectators would have viewed the 1885 lacrosse game from the new 8,000-seat grandstand that had been constructed for the State Fair, Einstein says. The grandstand was on land near today’s Engineering Hall.

UW played its first football game at the Camp Randall site in 1895 — likely on the same field, Einstein says. Prior to 1895, UW played football games in the area that is now Library Mall.

Lacrosse dates back thousands of years and was much more than a recreational activity, Bird Bear says. Some tribal nations called lacrosse “the little brother to war” because games could be used to settle disputes between Indigenous nations and bands of tribal nations. And it was an important way for Native Americans to stay in prime physical condition in case they needed to attack others or defend themselves, either in small scale sorties of raiding parties or large scale “national” wars. One such national war in Great Lakes Indian history occurred when the Ojibwe were able to help stave off the League of the Iroquois’ incursion into the Great Lakes during the fur trade economy in the 1600s.

“Lacrosse was a training game – it was a very physical game, a very brutal game, but it was helping to keep fit a certain component of the Indigenous society for safety and protection,” Bird Bear says. “And it also was a political tool to help solve conflicts before they became violent confrontations.”

The Ho-Chunk refer to lacrosse as “The Creator’s Game,” reflecting its long, honored tradition. UW–Madison occupies ancestral Ho-Chunk land, a place the Ho-Chunk call Teejop (Dejope, or Four Lakes). In an 1832 treaty, the Ho-Chunk Nation was forced to cede this territory. The Our Shared Future heritage marker at UW–Madison recognizes this history.

According to the Milwaukee Public Museum, tribal lacrosse games were played occasionally, usually at fairs, during the earlier part of the 20th century. By the 1950s, the game was not played as frequently, but it has seen a resurgence recently, the museum says. Wisconsin is among states that fields a lacrosse team to compete in the North American Indigenous Games, hosted every three years in either the U.S. or Canada. (UW–Madison offers lacrosse at the club level.)

“It’s wonderful to see our young people — children of our own Indigenous staff members of this institution and Indigenous students who’ve just joined our institution — playing and embracing lacrosse,” Bird Bear says. “It helps solidify and reaffirm their sense of self as Indigenous people, and it illuminates the cultural and linguistic revitalization that’s happening across the continent.”