New research out of the University of Wisconsin–Madison Arboretum shows that temperatures of about 100 degrees Fahrenheit kill the cocoons of invasive jumping worms.

That’s good news for ecologists and horticulturalists who are working to slow or stop the spread of the worms, which can damage the soils they invade. Common practices that raise the temperature sufficiently could limit the ability of worms to spread through paths such as compost or potted plants.

But this study is just an early step — little remains known about the life cycle of these invaders or how to stop them.

“We’ve been focused on the cocoon stage of the life cycle because we think that’s one way they are being spread. They’re small and hard to see so they’re easy to spread on shoes, equipment or soil,” says Brad Herrick, the Arboretum ecologist who co-led the recent study. “We wanted to try heat because in Wisconsin and many other states, commercially produced compost must be heated to 55 degrees Celsius, a treatment that we thought could kill the cocoons.”

Herrick and Arboretum research specialist Marie Johnston published their findings in May in the American Midland Naturalist journal. Herrick has been studying the jumping worms, named for their characteristic thrashing when disturbed, since they were spotted in Wisconsin for the first time in Arboretum forests in 2013. 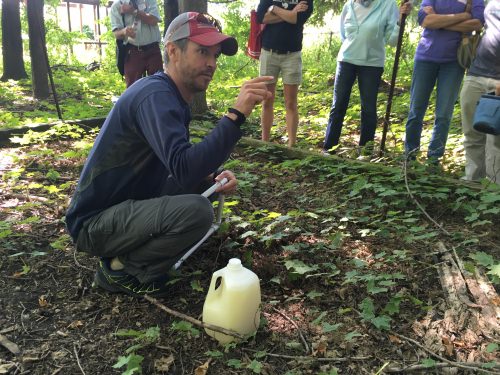 Brad Herrick demonstrates how to survey for invasive jumping worms to a group of volunteers at the Arboretum. Photo: Eric Hamilton

For the new study, Johnston and Herrick collected individuals from the two jumping worm species that have invaded the Arboretum grounds. The team housed groups of worms in colonies, fed them with leaf litter and collected all the cocoons each colony produced until the end of the reproductive season in late fall. Mating wasn’t a concern — the worms are parthenogenic, able to reproduce on their own.

In all, Herrick and Johnston collected hundreds of cocoons. Then they exposed the cocoons to temperatures ranging from 20 to 60 degrees Celsius for three or 15 days.

The cocoons were extremely sensitive to heat. Any treatment at or above 40 degrees Celsius (104 degrees Fahrenheit) killed all jumping worm cocoons in just three days. Because of variation in how hot their incubation ovens actually got, Herrick and Johnston pinpoint the lethal temperature to somewhere between 81 and 100 degrees Fahrenheit. 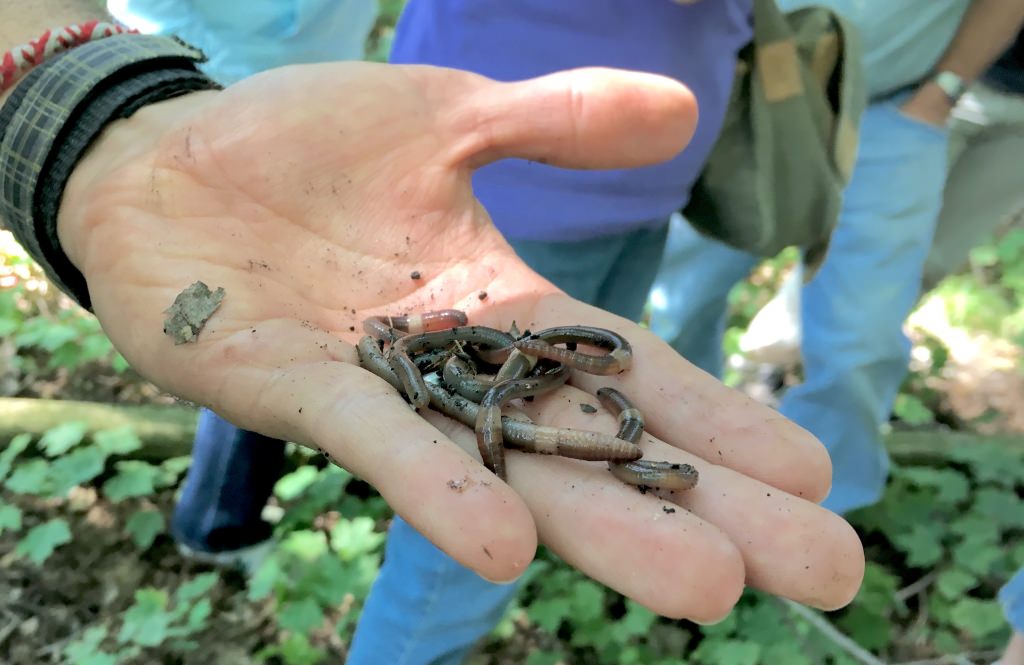 “What this tells us is there is a limit to what temperature cocoons can survive in,” says Herrick. “If a pile of compost, which we know is a vector for earthworms, is treated right to temperatures at 40 degrees Celsius or above, then that pile should be jumping-worm free.”

But, Herrick points out, that doesn’t make heat a cure-all. Even if compost is sterilized properly, it could still get contaminated by cocoons after the heat treatment is done. Plus, ecologists believe worms spread through many other pathways that aren’t exposed to high temps, such as dirty equipment or shared plants. 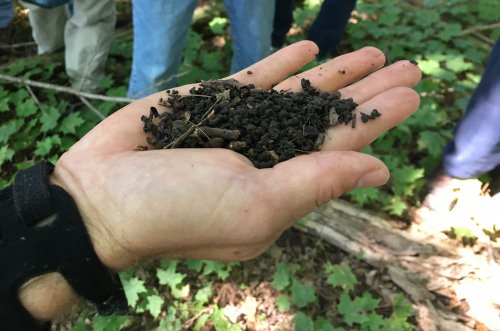 Herrick shows off the characteristic coffee ground-like soil — made up of worm castings — left behind by the jumping worms. Photo: Eric Hamilton

And while temperatures of 100 degrees Fahrenheit killed cocoons in the lab setting, cocoons could be much hardier if the temperature was raised more gradually or if they were in soil and leaf litter rather than glass vials. Herrick and Johnston are now testing cocoon viability under these more realistic conditions.

Nonetheless, the confirmation that sufficient heat can interrupt these invaders’ life cycle is welcome news as Wisconsin and other states work to limit the northward spread of these damaging invaders.