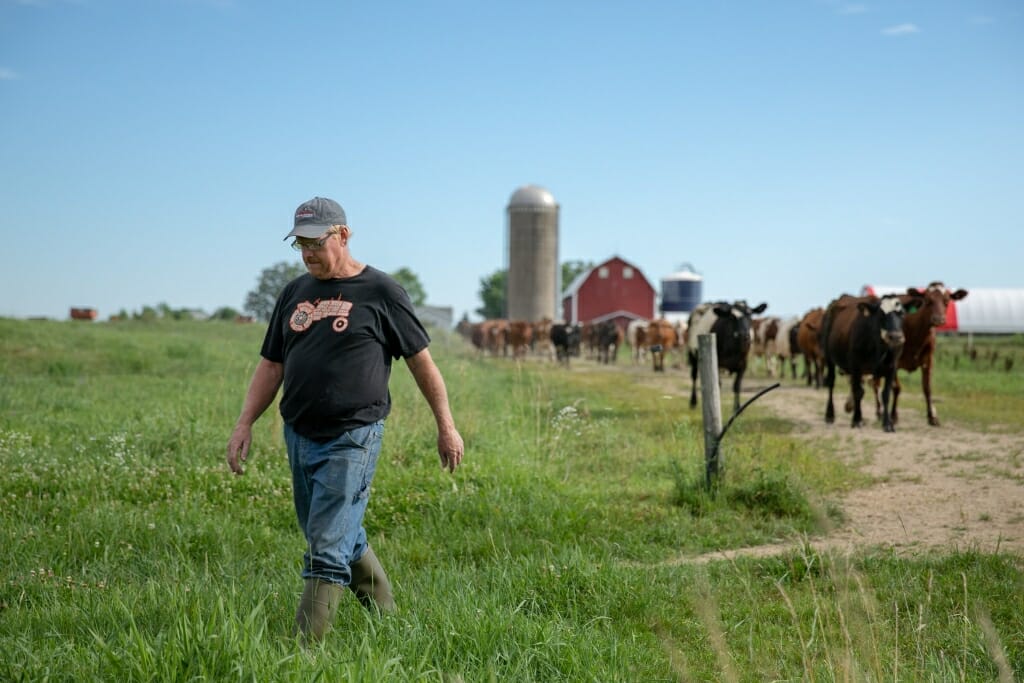 Bert Paris loves dairy farming. After more than 30 years, he’s beginning to transition the farm he operates near Belleville, Wisconsin, to his daughter, Meagan Farrell, who is excited about moving her family home to run it.

Despite years of terrible headlines about the dairy industry, farmers like Paris and Farrell are bullish on dairy because, despite chronically low and erratic milk prices, they’ve controlled their production costs with managed grazing. “Grazing, financially speaking, was the best thing I’ve ever done for my business,” Paris says.

Paris is a participant in Grassland 2.0, a newly formed collaborative group based at the University of Wisconsin–Madison that is working to create more opportunities for grazing and other types of perennial grassland farming. Paris joins a network of UW–Madison researchers, state and local agency staff, milk and meat processors, citizen groups, and other farmers coming together to seek transformative solutions to the growing number of threats facing Midwest food and farming systems. 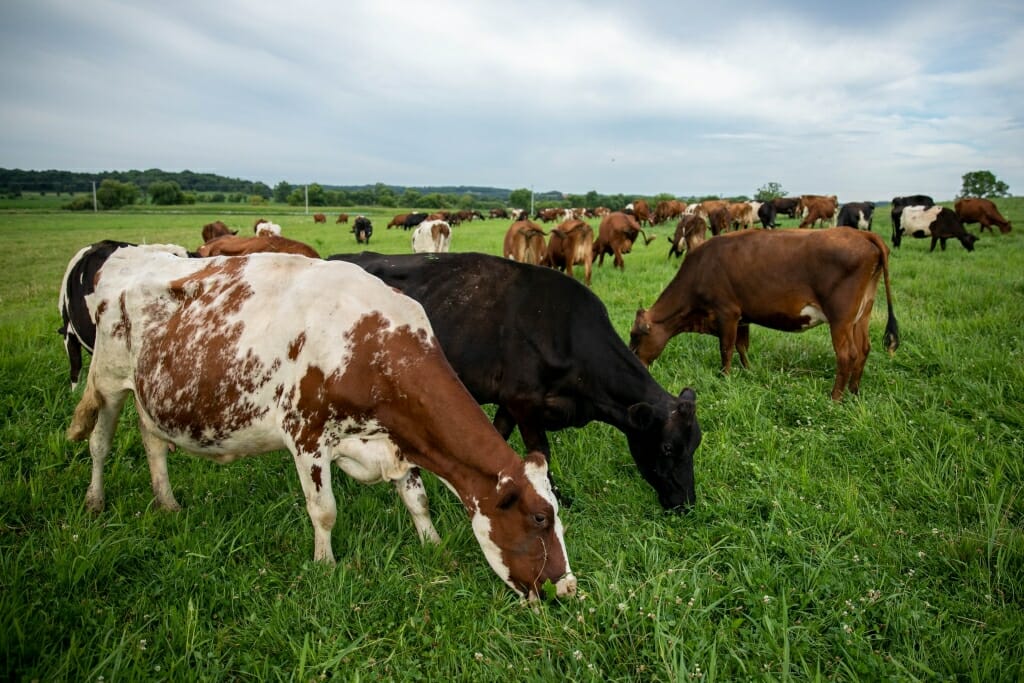 The project is bringing together stakeholders to envision and plan a future of profitable, productive farmland that also provides many of the benefits of the region’s original prairie, such as clean water, healthy soil, biodiversity and resilience to extreme weather.

Grassland-based farming practices represent a bright spot in an industry that is feeling the combined effects of low commodity prices, extreme weather events, rising production costs, and limited processing and marketing options. Consumer data suggest that while red meat and milk consumption are declining overall, both grass-fed dairy and meat sales are surging. A multi-decade analysis by the UW–Madison Center for Dairy Profitability found that although grazing-based dairies often produce less milk per cow, the money they save by grazing ultimately increases their profitability.

The Grassland 2.0 project is funded by a five-year, $10 million grant from the U.S. Department of Agriculture’s National Institute for Food and Agriculture. The project is based at UW–Madison and includes over 30 collaborators from research universities and producers to processors and farm organizations. According to Randy Jackson, a UW–Madison professor of agronomy who is leading the project, the grant represents an important investment in grazing.

“We’re going to need farming practices that simultaneously produce healthy food, support thriving communities, and restore ecosystem processes. Well-managed grazed perennial grasslands do that,” says Jackson. “This grant is a major win for thousands of farmers across the state and beyond, and a major win for citizens of the Upper Midwest, who desperately need incentives, expertise, and policies that promote sustainable agriculture.” 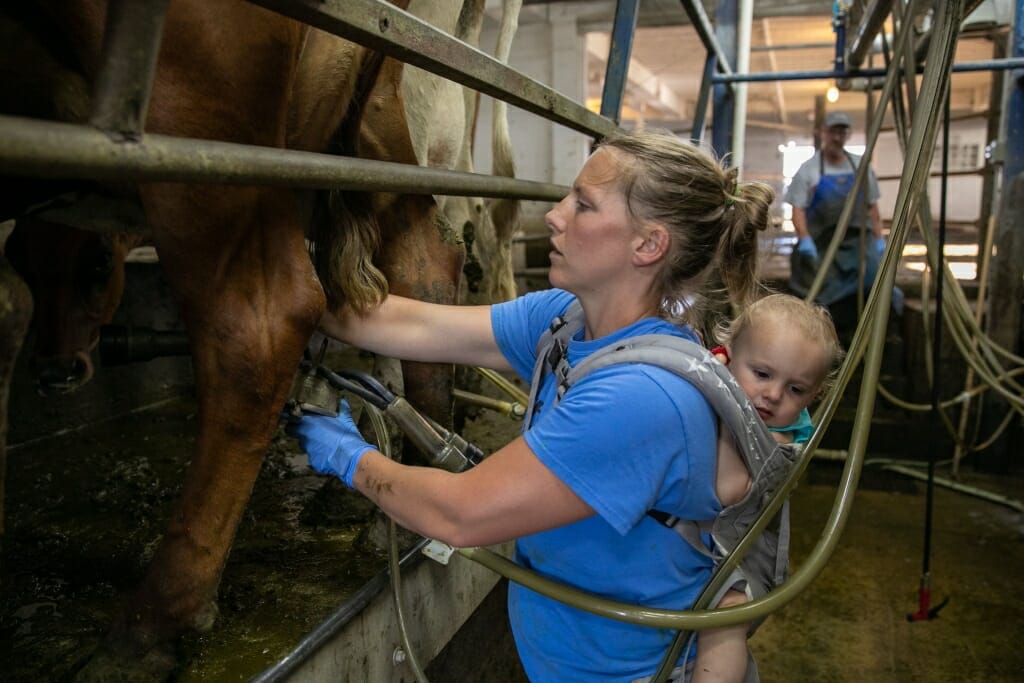 Meagan Farrell milking a cow in the milking parlor with her daughter at the Paris Farm in Belleville, Wisconsin. Photo by Finn Ryan

The benefits of grass-based systems are many, and they extend beyond farms. According to research by the USDA, UW–Madison, and the Wisconsin Department of Agriculture, Trade and Consumer Protection, well-managed grasslands can reduce soil erosion and nutrient runoff, sequester carbon, increase water retention, reduce flooding, and support wildlife such as native pollinators, trout and birds, all while providing an income source for farmers and maintaining investment in rural communities.

Municipalities and local governments are also investing in grazing. In 2018, Dane County launched a pilot program offering payments to farmers for converting to grassland-based farming systems. The county has since doubled the program’s budget.

At the same time, there are technical and economic challenges to entering and adopting grassland agriculture. To that end, Grassland 2.0 will focus on sharing existing information and grazing resources with farmers. They are also working to expand grass-fed markets, identify policy tools that facilitate managed grazing and perennial land cover, and bring together diverse partners at the local and regional level to explore different approaches to expanding grassland agriculture.

“We recognize that for restorative agricultural systems to work, we need to do more than just provide resources and information to producers,” says Jackson. “We need to work with processors, lenders, policymakers and state and federal agencies to confront these challenges to agriculture in a holistic way. We have to bring everyone together to map transformative pathways forward.”