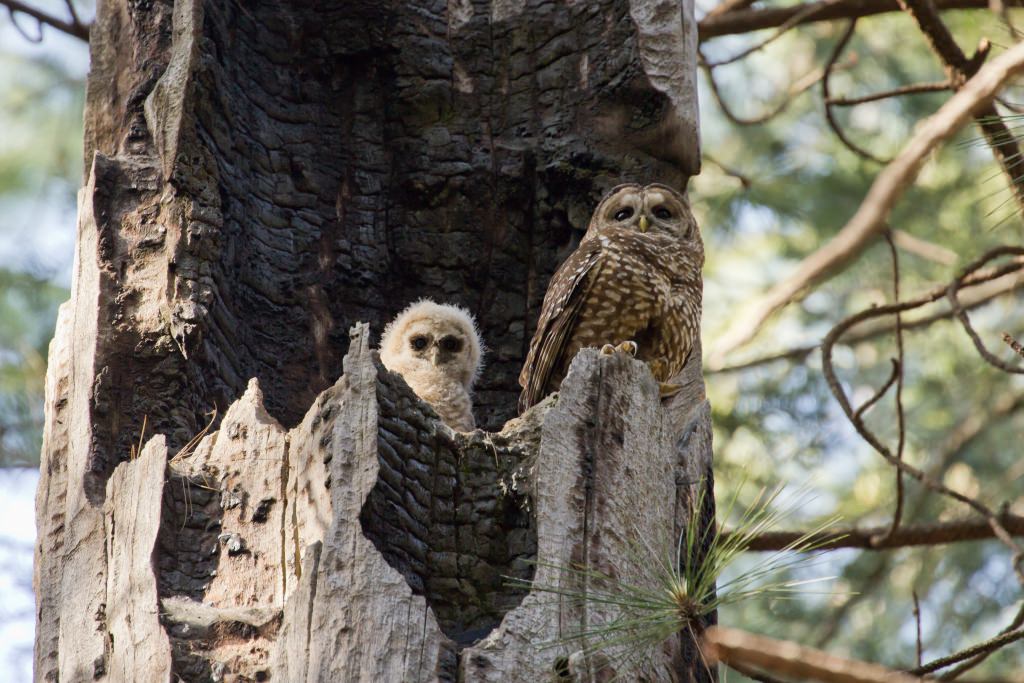 An adult female California spotted owl and owlet on the nest. A UW–Madison research group has documented an exodus of owls following the fierce, 99,000 acre King Fire in California in 2015. Photo: Sheila Whitmore

As climate changes and wildfires get larger, hotter and more frequent, how should public lands in the American West be managed to protect endangered creatures that, like the spotted owl, rely on fire-prone old-growth forests?

Could periodic forest thinning and prescribed burns intended to prevent dangerous “megafires” help conserve owls in the long run? Or are those benefits outweighed by their short-term harm to owls? The answer depends in part on just how big and bad the fires are, according to a new study. 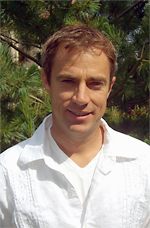 In a report published Aug. 1 that may help quiet a long-simmering dispute about the wisdom of using forest thinning and prescribed burns to reduce the “fuel load” and intensity of subsequent fires, a University of Wisconsin–Madison research group has documented an exodus of owls following the fierce, 99,000 acre King Fire in California in 2014.

The California spotted owl is a close relative of the northern spotted owl, which became the centerpiece of forest conservation battles in the Northwest in the 1990s. Both owls are indicator species whose presence is said to signify the ecological health of their required, old-growth forest habitat.

As the federal government moves ahead with master plans for 11 national forests in the West, environmental organizations and scientists have been drawn into the dispute, says Zach Peery, principal investigator of the new study, which is now online in the journal Frontiers in Ecology and the Environment. “Proponents of fuel reduction say it’s going to benefit the owl by reducing the frequency and size of megafires,” says Peery, an associate professor of forest and wildlife ecology, “but there is this body of literature that says the California spotted owl does just fine following severe fires, even when they are large.” 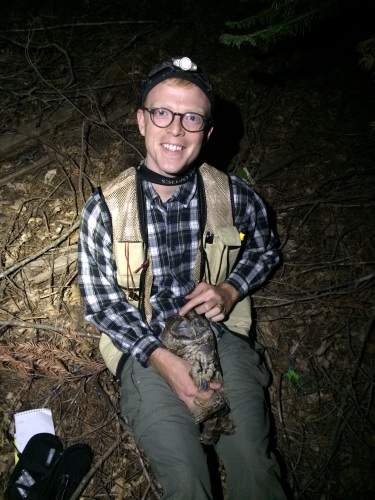 According to that line of thinking, the cure — forest thinning and prescribed burning — was worse than the disease.

Megafires are defined as fires that severely burn at least 25,000 acres.

“There is new literature suggesting that even megafires are okay for spotted owls,” says lead author Gavin Jones, a graduate student studying with Peery, “but previous studies were limited because they lacked pre-fire data and had a small sample size of severely burned owl sites, among other reasons. This was a controversy waiting for good data.”

Pre-fire data is a strong point for the new report on the King Fire, which burned in September and October 2014 in the Eldorado National Forest in the Sierra Nevada mountains. The fire, considered one of the largest and most severe in California’s recorded history, burned at the site of a 23 year owl population study. Colored bands on owls’ legs allowed them to be identified from a distance.

The fire touched 30 of 45 owl sites that the researchers have monitored since 1993, and birds were absent from almost every one of the sites that burned most intensely, Jones says. “If a site got torched, and was occupied the previous year, it’s empty now.” 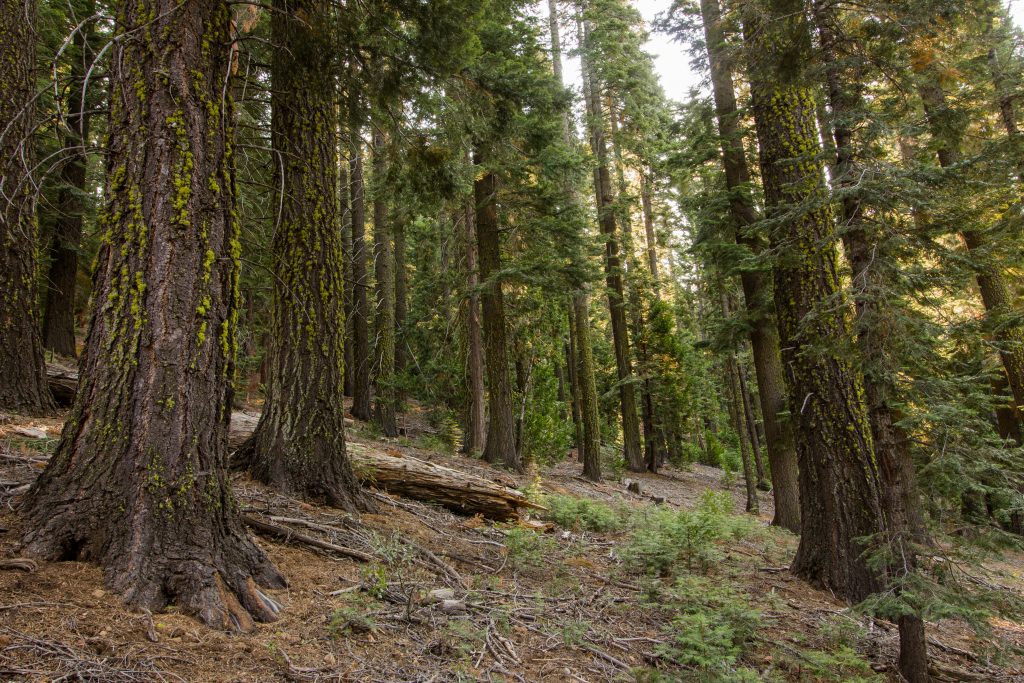 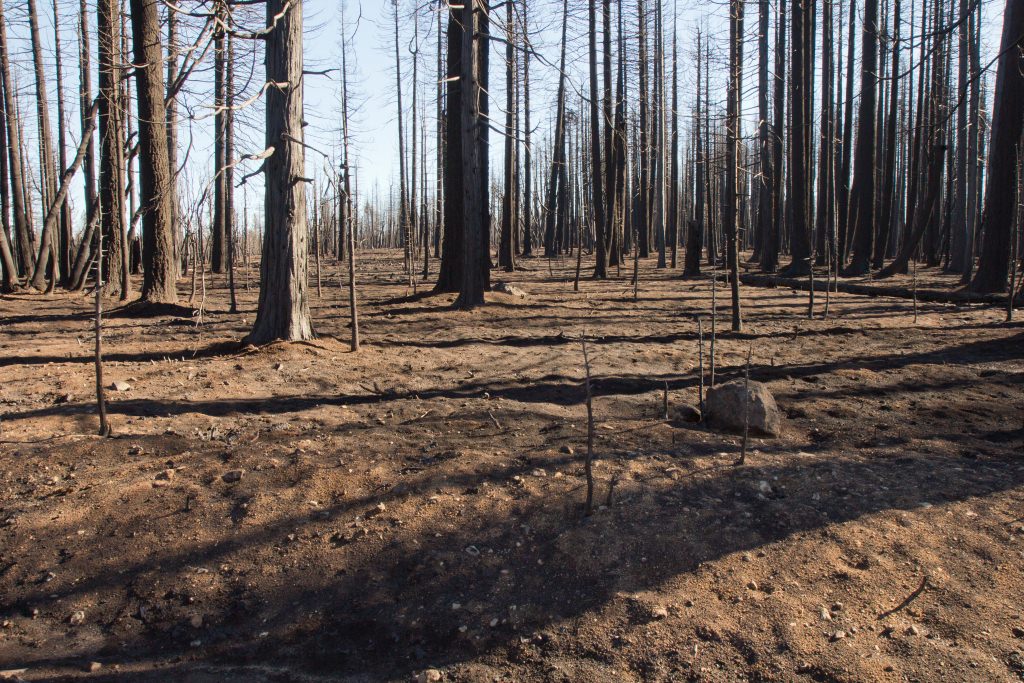 A former spotted owl nesting site in the aftermath of the 2014 King Fire. This site had been occupied by a pair of owls for 21 of 22 years prior to the fire. Photo: Sheila Whitmore

The problem of fire in the West is growing more severe for many reasons, but decades of fire suppression intended to protect communities and timber resources, and climate change are likely the ultimate drivers, says Jones. “It’s amazing. On the study area there were several giant holes in the ground where nesting trees were the year before — enormous old-growth Douglas firs or something like that. A spotted owl used the tree the year before and now it’s a crater. The tree got so hot, it exploded.”

The recent losses come on top of a steady decline in the area’s owl population since the study began, Jones says. Habitat change may explain those losses, but it’s complicated. For example, although clear-cutting has abated on the public lands in the study area over recent decades, it continues on private land, and lasting effects from historical clear-cutting could explain some of the decline.

“In ecology, we mostly observe. But this was a before-after-control-impact design that’s statistically very powerful.”

The new study is nearly an ideal natural experiment, Jones says. “In ecology, we mostly observe. But this was a before-after-control-impact design that’s statistically very powerful.”

“We had this long-term demographic study, we knew all the owls in the 137 square mile study area,” says Peery. “The fire burned almost half the study area. On one side was the treatment, a large, high severity fire, and on the other side was the control, with little or no fire. Almost all the owl territories within the megafire went from occupied to unoccupied. We can now say that megafires have a significant impact on the spotted owl, and so we think that forest restoration through fuel reduction benefits both the forest ecosystem and the spotted owl.”