A new, biodegradable gel filled with a cocktail of immune-boosting cytokines and cancer-fighting cells staved off the growth of lingering cancer cells in mice after tumors were surgically removed.

Three weeks after surgery, the tumors of mice treated with the specialized gel were roughly 60 times smaller than those of mice not given the treatment. 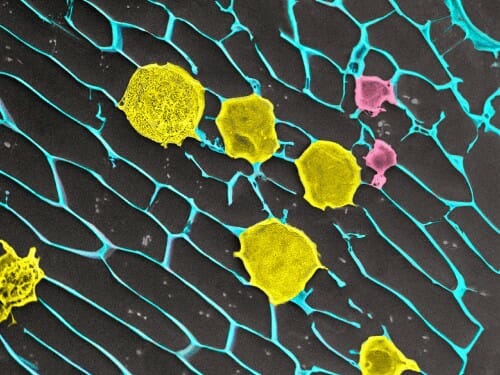 A high-magnification image of the tumor-suppressive gel. The gel is in blue, antibody-bearing platelets are in purple, and modified T-cells are in yellow. Image by Quanyin Hu

The proof-of-concept experiments demonstrate that these gels could help battle cancer at a critical moment: when a tumor has been removed but malignant cells continue to lurk after surgery, ready to grow back. Although more research is required to develop a treatment for cancer in humans, these preclinical results provide a promising new way to deploy the immune system to wipe up cancer cells after surgery.

Quanyin Hu, who recently joined the faculty of the University of Wisconsin–Madison School of Pharmacy, led the research. He completed the work with colleagues at the University of California, Los Angeles, the University of North Carolina, Chapel Hill and Zhejiang University, including the teams of Zhen Gu and Gianpietro Dotti. The research was published April 26 in the journal Nature Biomedical Engineering.

The technique relies on focusing the efforts of T-cells, which are part of the immune system capable of destroying tumor cells. Researchers genetically reprogrammed the cells to target cancer-specific markers, concentrated the cells in the biodegradable gel, and supported them with T-cell-boosting cytokines and tumor-suppressing antibodies. 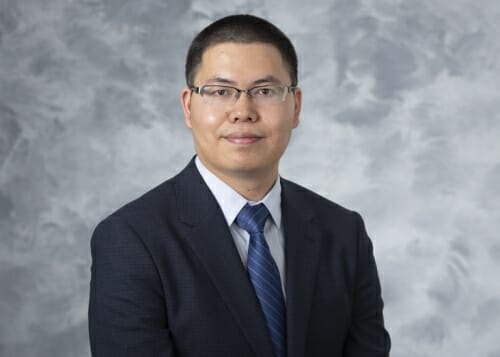 The Food and Drug Administration has approved three T-cell-based therapies for lymphoma and leukemia, two types of blood cancer. Known as CAR T-cell therapies, these treatments reprogram a patient’s own T-cells to recognize cancer-specific markers, which are features unique to cancer cells. Infused back into the patient’s bloodstream, these CAR T-cells go on to detect and destroy cancer cells much better than before.

But CAR T-cell therapies don’t work as well for solid tumors, such as melanoma or breast cancer, because they are harder to reach through the bloodstream. And although many tumors can be surgically removed, it’s very difficult to remove every last malignant cell, so additional chemotherapy or radiation treatment is often used to clear away lingering cancer. This mop-up treatment saves lives, but can cause severe side effects, so creative new ways to clean up surgically removed tumors could be a boon to patients.

“That’s the motivation for why we want to develop these new technologies to facilitate the treatment efficacy of CAR T-cells against solid tumors,” says Hu.

To improve the system, Hu and his team made three main changes. First, they added IL-15, an immune-boosting signal known as a cytokine that promotes the growth and vigor of T-cells.

Second, they added platelets, the specks of cells that clot blood, that they bound to tumor-suppressing antibodies. Hu says that the biggest limitation to CAR T-cell therapy for solid tumors is a sort of off switch that tumors use to hide from T-cells. These antibodies block that off switch, reactivating T-cells in the area.

In the third step, the researchers loaded the reprogrammed T-cells, IL-15-loaded nanoparticles, and antibody-decorated platelets into a gel made up of biocompatible materials. The gel provides a good environment to support T-cells so they can be applied during surgery to remove a tumor and then slowly release into the surgical site. The body eventually degrades the gel.

The beneficial effect of the gel even extended to tumors in other parts of the body. In another experiment, mice harbored two melanomas, one on each side of the body. Researchers removed just one and treated the site with the gel. But engineered T-cells traveled from the gel to the other tumor, slowing down its growth, too.

“This experiment mimics how tumors can metastasize from one part of the body to another. And we saw that our local treatment strategy can also induce systemic efficacy,” says Hu.

Although the results are promising, there are many other steps to try and develop the gel system into a treatment for people, including more animal studies. The Hu lab also wants to better understand how the body’s natural platelets affect the modified platelets in the gel. And they’re looking to study how well the gel works for other cancers, including inoperable tumors.

“I think we’re on the right path for clinical translation, but we have more to learn first,” says Hu.

This work was supported in part by the National Institutes of Health grant 1R01CA234343-01A1.